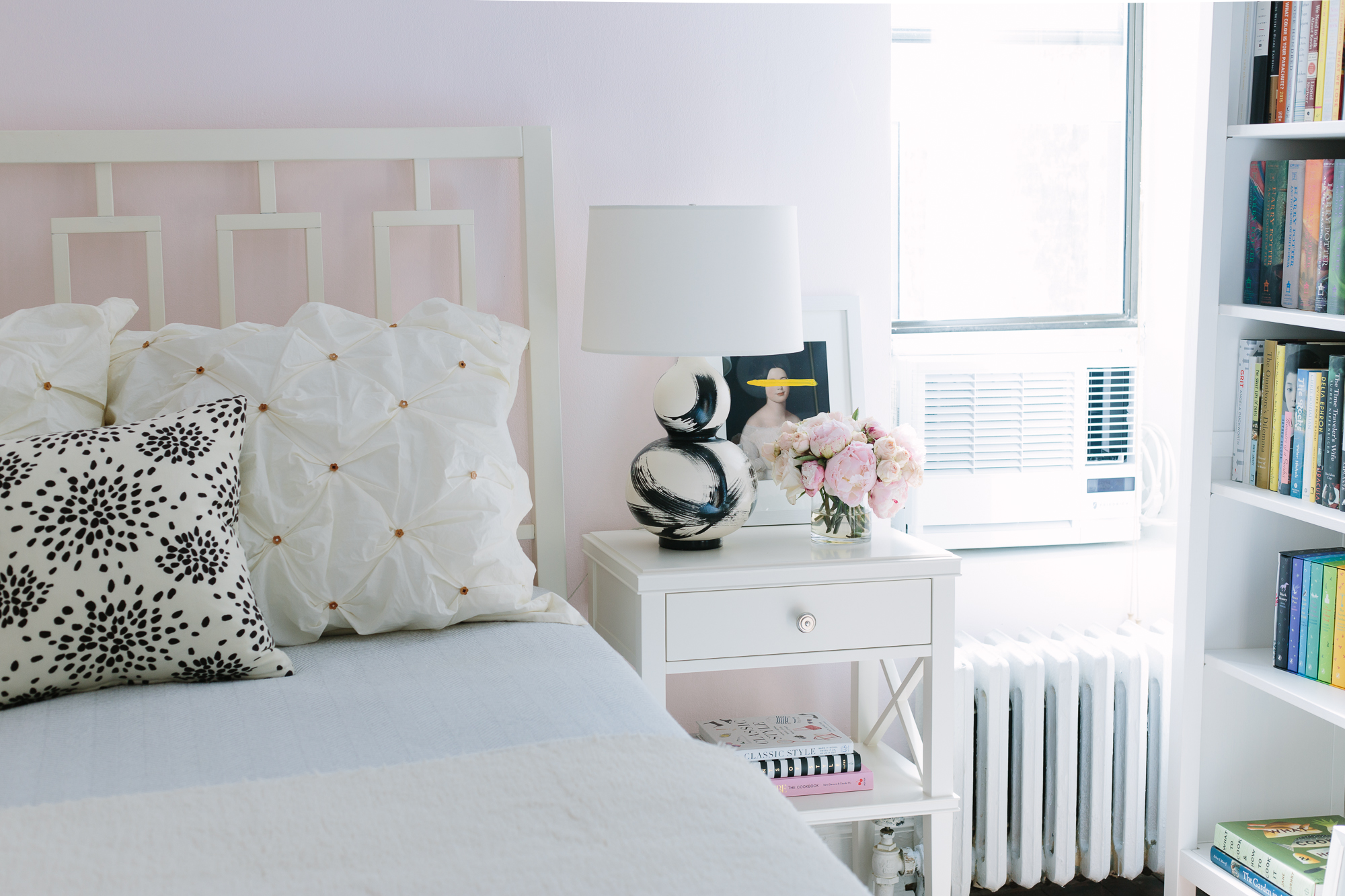 No, not THOSE kinds of problems!

Hah, sorry, couldn’t resist. But I really do want to talk about a bedroom problem today…a bedroom DECORATING problem.

Living in New York City, I am incredibly, incredibly lucky to have found a one-bedroom apartment that I can actually (kind of) afford to rent. I loved my studio apartment but after living there for 5+ years I was starting to grow out of it – or to be more accurate, my stuff was starting to grow out of it…and I was desperate for more space to decorate. So I was definitely really excited to find this place, which not only has a bedroom, but a bedroom that fits more than just a bed – this is rare! Most one bedrooms in NYC the bedroom fits a queen bed and maybe a dresser…and that’s about it. This bedroom fits multiple pieces of furniture. It’s not perfect – it gets almost zero light which it turns out is actually more important to me than space, but anyway. Let’s talk about the furniture layout, which I’ve found to be a challenge to say the least! Get ready for some really ugly iPhone pics which were definitely never meant to make it to the blog!

This was right when I first moved in. I had been planning to put the bed on the left hand wall, but the movers put it here and I kind of liked it, so I left it. And thus, the first layout that I tried for the bedroom, dictated by my movers (lol). I actually even bought the nightstands based on the width that would fit here (taking the radiator into account).

Here’s the west wall. I got this dresser from my parent’s basement and if you watch my Insta stories you know allll about the debacle of painting it. If not, just keep reading ’cause you’ll see. Also, don’t ask me why, but I got really stuck on having this chair in the corner with the painting above it. It looks okay but something was always a little off about it. 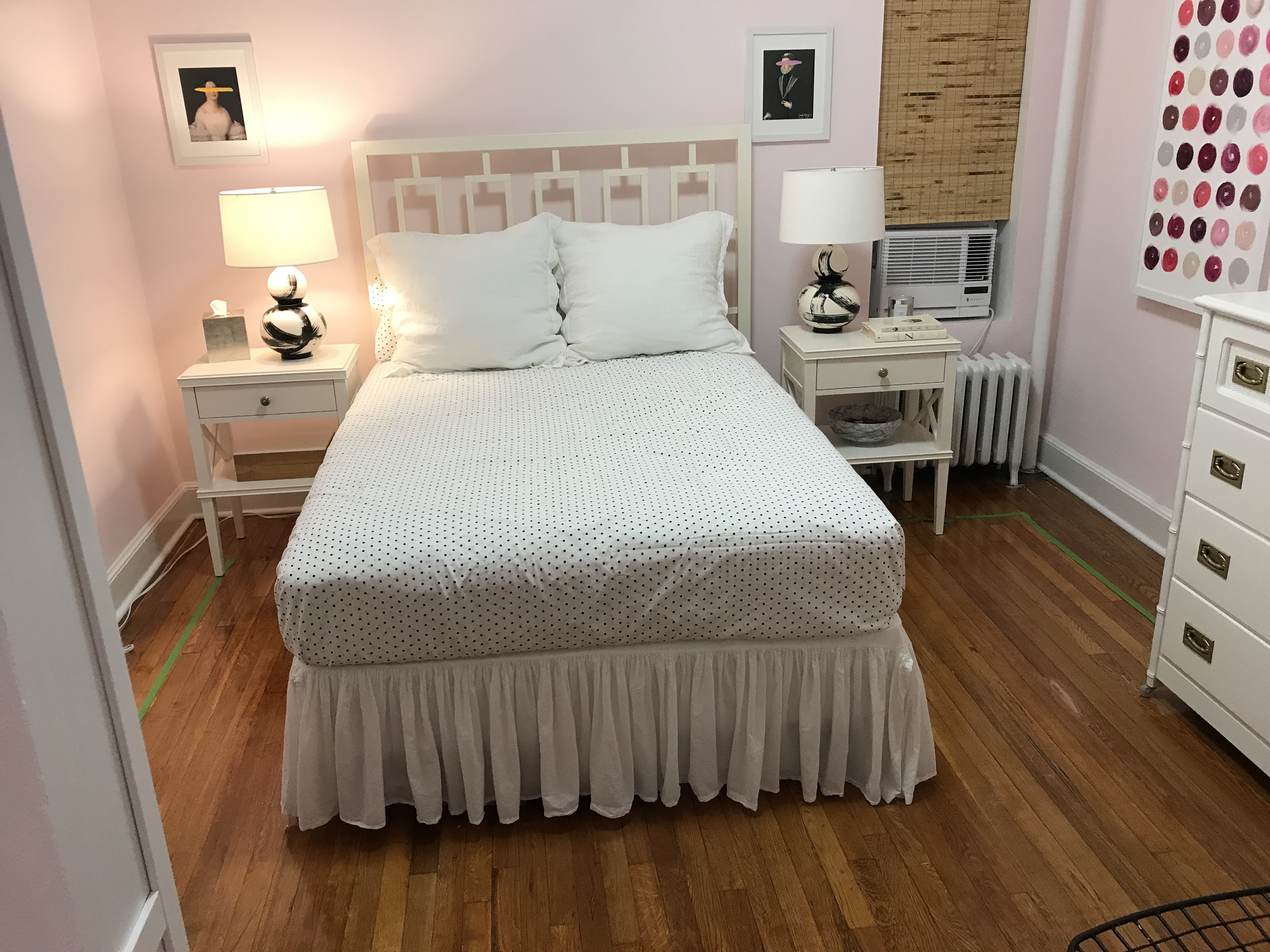 (Sorry for the tilt-y photo). The annoying thing about the back (south) wall of the bedroom is obviously the position of the window and the radiator, which made it difficult to center the bed on the wall and do a symmetrical arrangement with the nightstands on either side. I thought about maybe putting some tall piece of art on the opposite side of the wall (by the other nightstand) to balance it out. However, at some point I decided to try centering the bed and kind of pretending the radiator wasn’t there. Instead of nestling the nightstand in next to the radiator, I moved it forward so it would overlap the radiator. This created about a half a foot of space between the wall and the back of the nightstand which kind of bugged me – they were kind of floating next to the bed. (The green tape on the floor is where I was taping out for a rug to figure out what size to get).

That space between the wall and nightstand bugged me so much that I decided to try the bed in the spot where I had originally thought it would go, against the left side wall. For a while I liked this arrangement. PS, here’s the rug! I really like it and it was very well-priced. Here you can also see my Ikea bookcase which from the start has been living on that little wall next to the doorway. 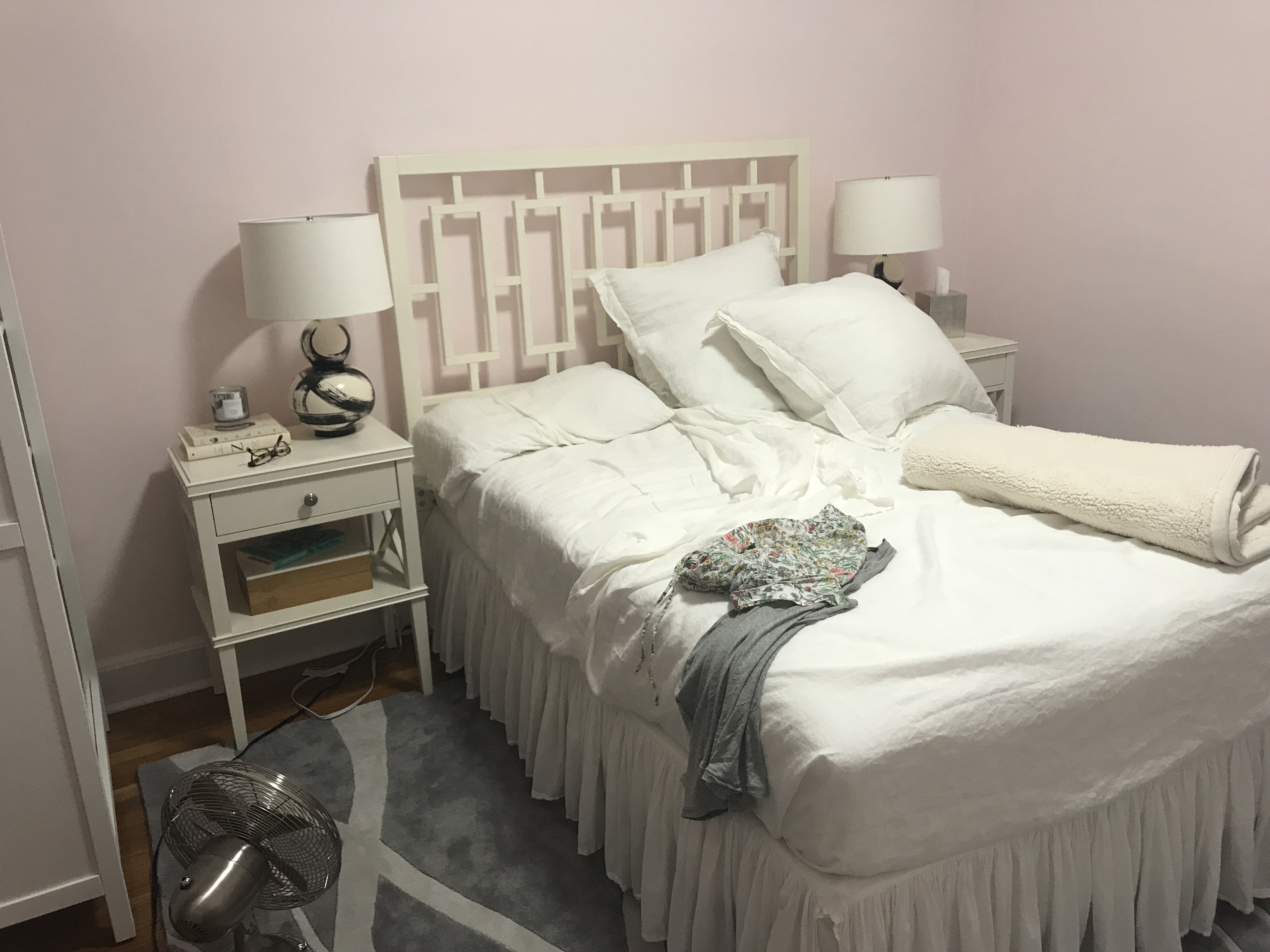 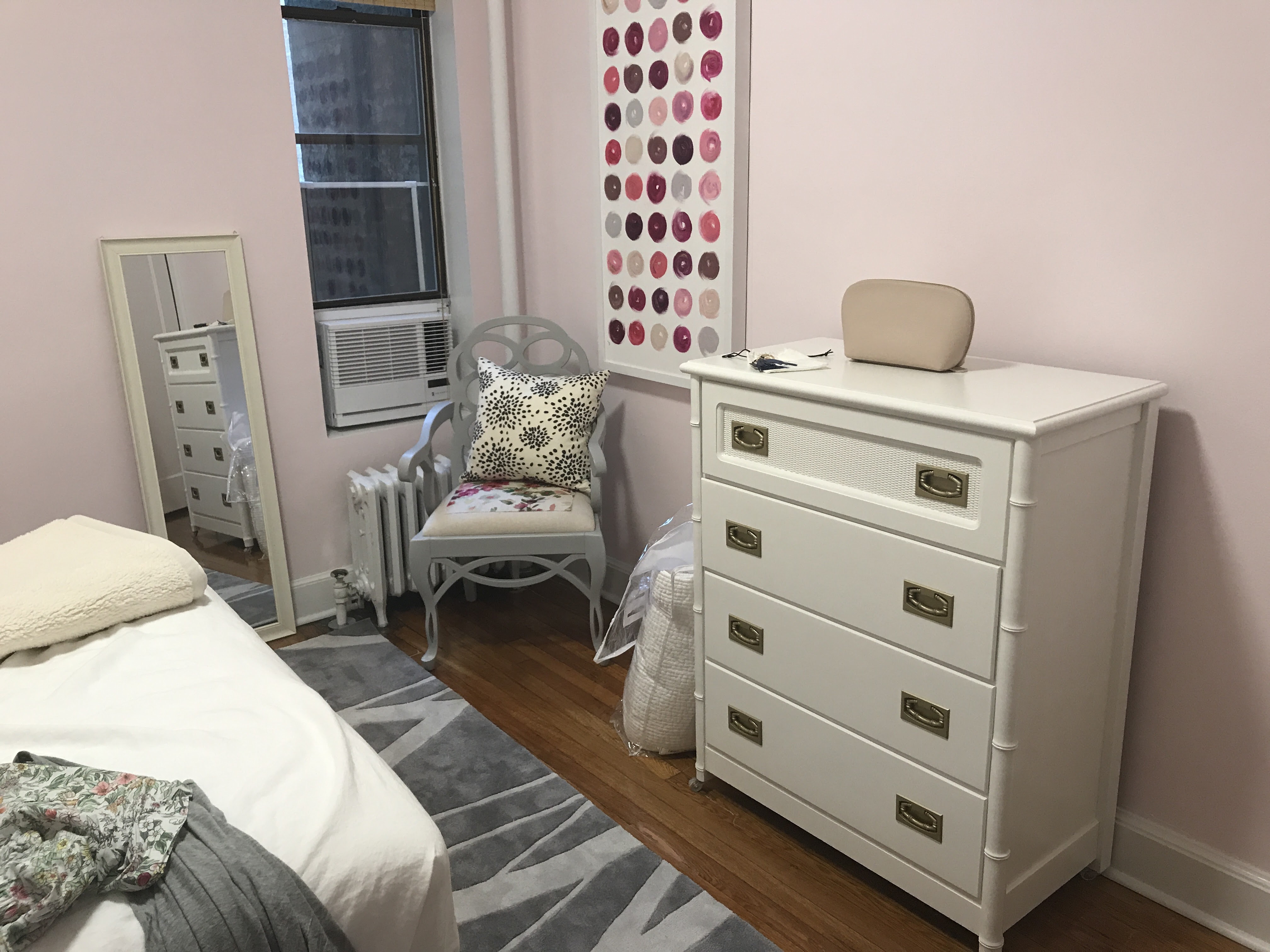 I hung my inspiration board on the little slice of wall between the doorway and the closet. I was okay with this arrangement for a little while. What changed next was that I was talking to my Mom about the living room and she suggested the idea of putting my desk in the bedroom – because while it looked totally cute in the living room, it was blocking off a LOT of space (that desk is big), and obstructing the walkway between the coffee table/restricting what size of coffee table I could get, etc. And we knew extra seating would really be better in the LR than a desk. And thus the idea of bringing the desk into the bedroom was born…

I’m a doer, guys (sometimes). Once I got the idea of putting the desk in the bedroom there was no stopping me. I had to execute this plan. I had already dragged my bed around my bedroom and acquired sore arms and back in the process…why not drag my massively heavy secretary desk into the bedroom? Seemed like a great idea.

We decided to put it on the wall where the dresser was…and then we couldn’t decide where to put the dresser, which was another issue. Also why is my bed now pushed all the way into the back corner in the left photo? Who knows. I was trying everything! Tried the dresser next to the bed – bad.

My Mom suggested moving the dresser next to the doorway (where the bookcase had been), and the bookcase to the little nook by the window (it’s hard to see, but the wall goes in a little over there, creating a little “nook” which the bookcase fits perfectly into). But no, I didn’t like it and I was really set on having the chair over there (what? like why?). And hey – the bed is back on the back wall! Ok. 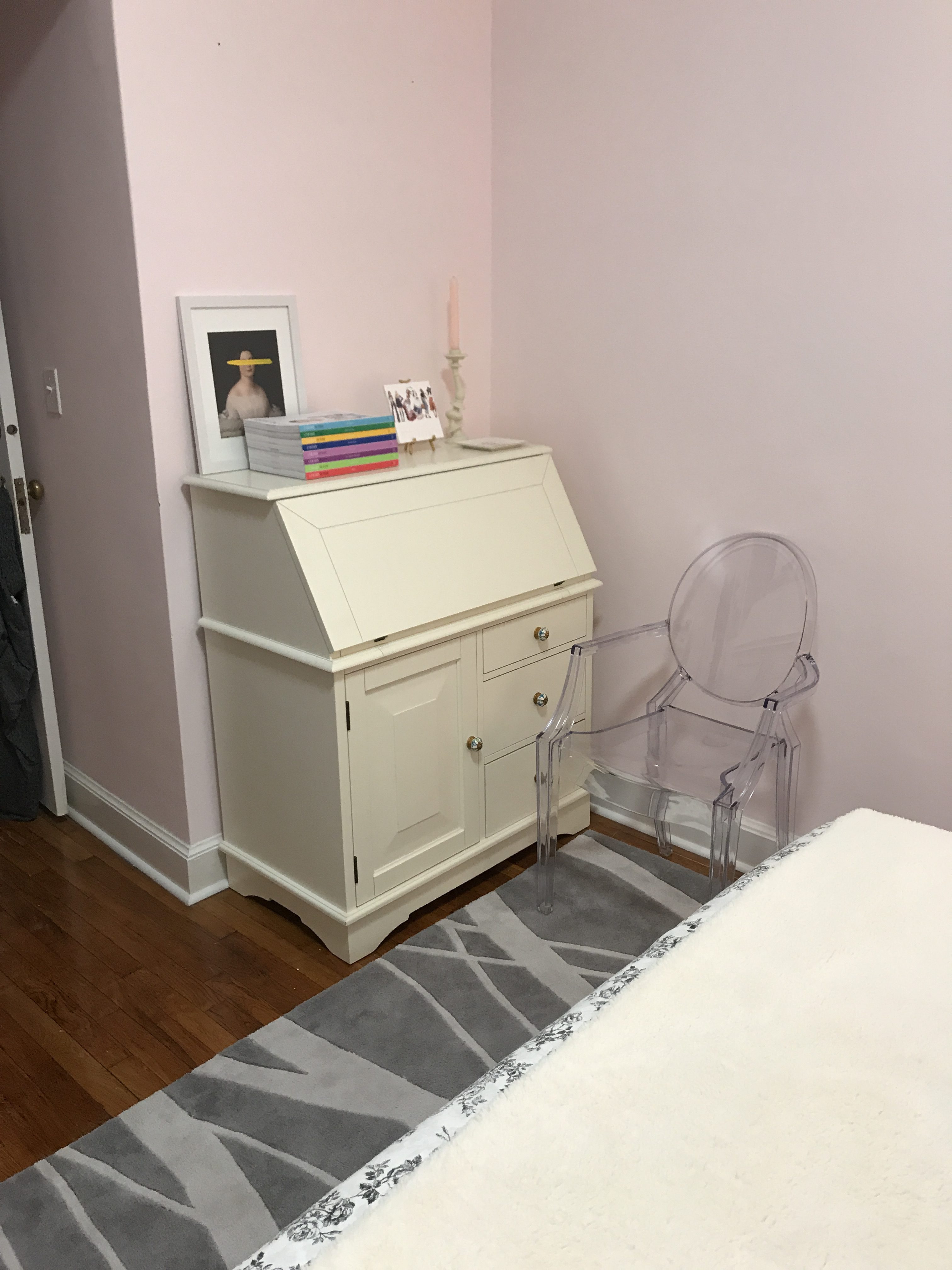 Next up – again, at my Mom’s suggestion after many late nights discussing the situation – the desk moves to this spot. PERFECTION! Hello, why did I not think of this? Because I was obsessed with having the bookcase there. The desk fits perfectly in this spot and it’s like a cozy little desk corner. 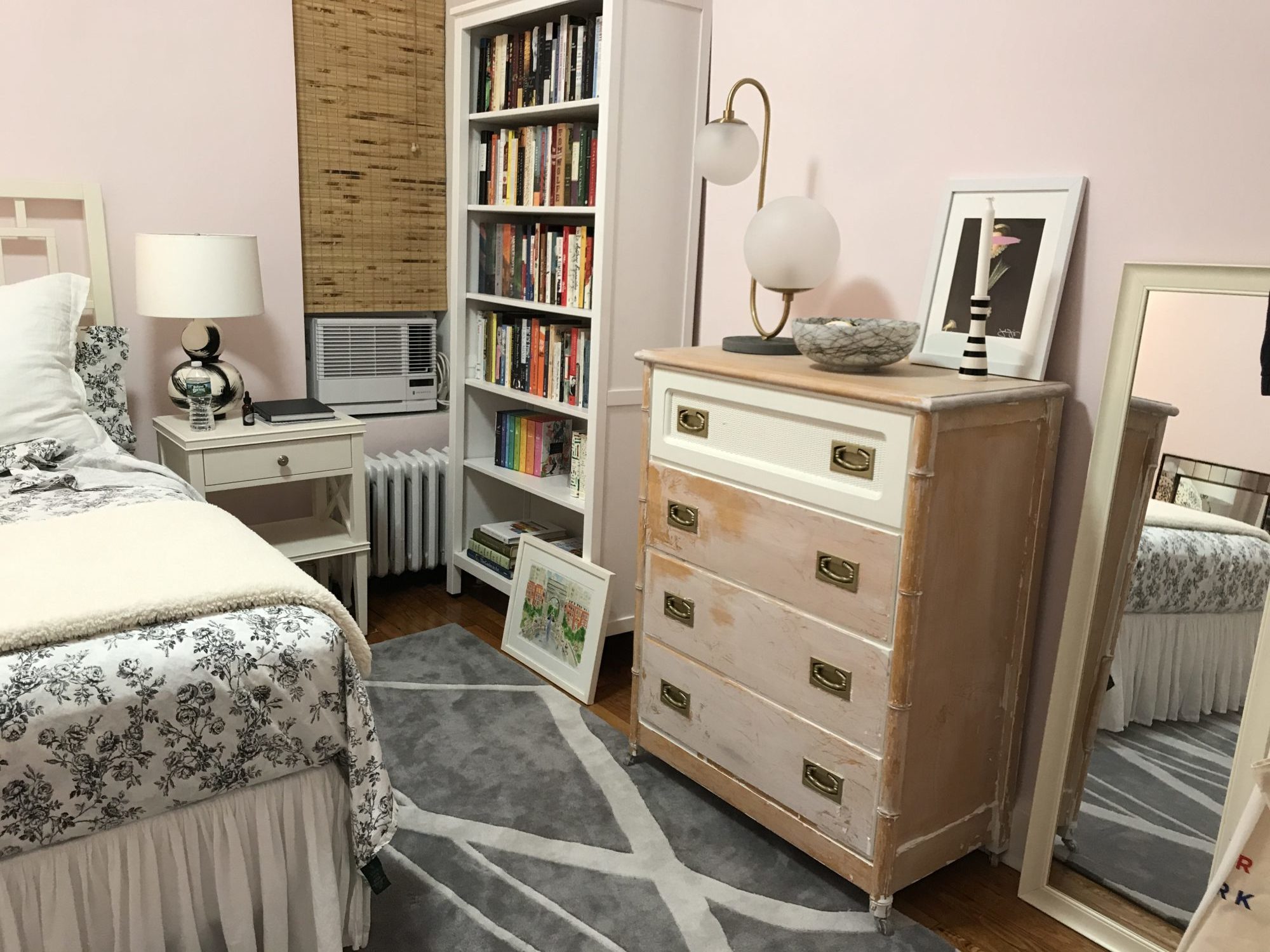 Hot mess alert! And you can see what happened with the dresser – the paint peeled off of it. Great, huh? I think it was a matter of being wayyyy too hot and humid when I painted it but anyway, more on that later. With the desk in the corner, that left only the nook by the window for the bookcase. And it worked perfectly.

Remember the issue I had where I was annoyed by the nightstand being pushed in front of the radiator and having that big space behind it? Well, by placing the bookcase in that spot, it sort of visually blocks some of the radiator and also visually brings that west wall in a bit…so what I was able to do was put the nightstand right next to the radiator, and visually the bed looks centered on that back wall. Also the bookcase kind of balances out the window and hides the radiator pole which was also messing up the visual by the window. It was awkward having that tall window and tall pole with the relatively short chair in front of it…now the bookcase it tall like the window and the pole, so visually it just looks less awkward.

Kind of confusing but guys, it works! This is how the layout stands now, and I can confidently say, having tried everything else, that this is the best arrangement – and all thanks to my Mom, whose suggestion of where to put the desk and bookshelf made it all come together. Yay for Mom! Thanks for bearing with me through all of these hideous photos…hope to have a good after to show you soon!