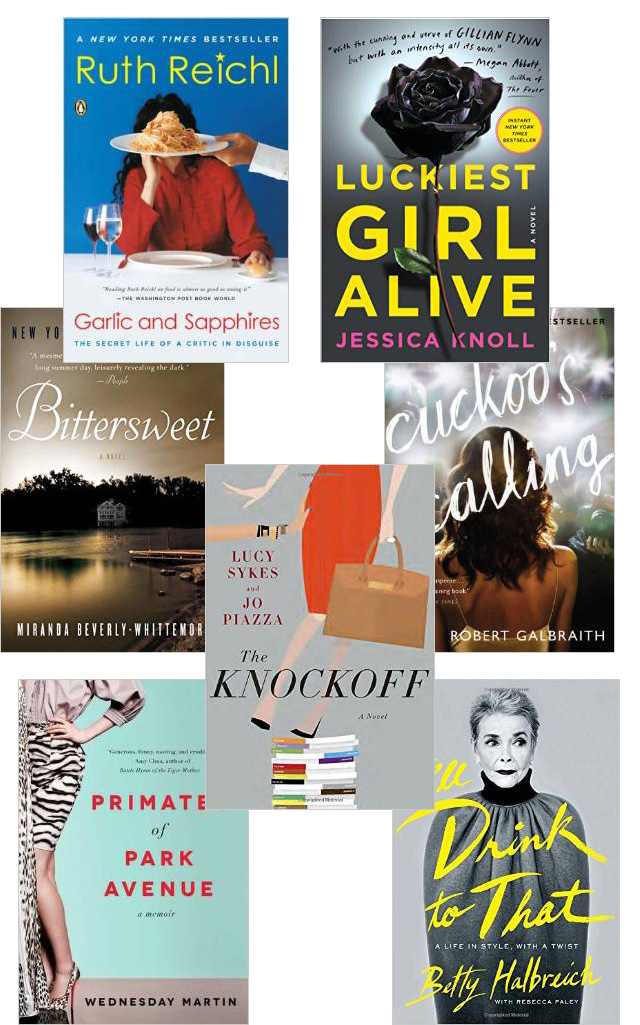 I love this book. I read it a long time ago and decided to re-read on audiobook, and it’s just a great story for foodies, and really well-written. This book is a memoir of Ruth’s time as the NY Times restaurant critic (from 1993 to 1999), interspersed with her restaurant reviews from that column. In order to avoid detection as a critic, she dressed up in different disguises when visiting the restaurants she would be reviewing, so that she could experience the way that they really treat “regular” customers – so fun to read about. Another interesting aspect to this book is reading about New York in the 90’s, and seeing how much it has changed since then (a surprising amount, I found).

There were so many mixed reviews of this book on Amazon that I fully expected it to be not great, but I’m glad to say that I was pleasantly surprised-I really, really enjoyed it. I found the story to be unique and very engaging, and maybe I’m dense, but I really didn’t see any of the twists and turns coming. It was all a big surprise to me. There’s also soooo much talk about what an unlikable narrator Ani is, and some reviews saying they didn’t like the book just because the character was so unlikable. For me, she wasn’t “unlikable,” persay. I found her to be more pitiful and sad than evil – more someone to feel bad for than someone to be reviled and hated. The book moves back and forth between present day and flashbacks, and the more we got to know the young Ani, the more I felt her new, unlikable persona to be a carefully crafted ruse. Anyway, as you can see she’s a somewhat complex character, which makes for great reading. This one has stuck with me a bit, so I definitely recommend.

Didn’t actually like this one. It’s about a girl from a kind of downtrodden family who winds up spending a summer at her rich college roommate’s family’s compound in the country, and all the secrets she discovers among these eccentric rich folk. The premise was really intriguing to me but I disliked the main character…come to think of it, I disliked most of the characters. Also the dialogue really didn’t ring true to me (or I should say, ring real), and neither did most of the scenarios described. The way people acted in the book, I just couldn’t help thinking, no one acts like that. I thought it was a good concept but poor execution. Amazon reviewers seem to disagree with me though, so investigate further if you’re intrigued!

The Knockoff, by Lucy Sykes and Jo Piazza

This book was a total beach read, but I liked it! It was light, fun, silly, and over the top. It’s basically like Devil Wears Prada, except the assistant is the “devilish” one, and when the boss goes on medical leave, she takes Glossy (the Vogue-esque magazine where they work), and turns it into an app rather than a print mag. Then the boss comes back and has to contend with all of these tech-y things like Twitter and Instagram that she doesn’t get. Anyway, the characters were fun and the whole thing was just entertaining.

To me this book was kind of “meh.” I didn’t mind it but I definitely didn’t love it. I typically love mysteries and books of this genre, but the problem I found here was that while the mystery was okay, the solving of it (i.e., the bulk of the book), was just boring. No really interesting things came up during the investigation…it was all very ho-hum. Bit of a disappointment.

So much hype about this one (four articles in the NY Times!), and ultimately I didn’t find it be anything groundbreaking, but I liked it. The author has a PhD in comparative literature (not anthropology, as early reviews seemed to suggest), but she did study anthropology as an undergrad, so she does use a supposed “anthropological” angle in this book…although as far as I could tell, it was mostly an excuse to compare the Park Avenue moms (who weren’t very nice to her in the beginning), to monkeys and apes. It seemed more like she was being a little satirical – literally, she compares these woman to apes and bonobos over and over. Either way, you get a glimpse into Upper East Side mom life, for better or worse. If you like the show Odd Mom Out on Bravo (which surprisingly I actually find pretty funny), you’ll probably be interested in this (though this book is not humorous, unfortunately).

I’ll Drink to That, by Betty Halbreich and Rebecca Paley (audiobook)

I really, really enjoyed this book. Betty Halbreich has lived, and still lives, a really interesting life. She writes about her wealthy but lonely upbringing in Chicago, her fairy tale gone awry marriage, and then her years working at Bergdorf Goodman as a personal shopper (where she still works). She helps clients to dress themselves and along the way, they become like family. She also works with costume designers for movies and television shows, such as Pat Fields for Sex and the City. Her whole life is just extremely interesting and she’s a really cool person, so I highly recommend this one.