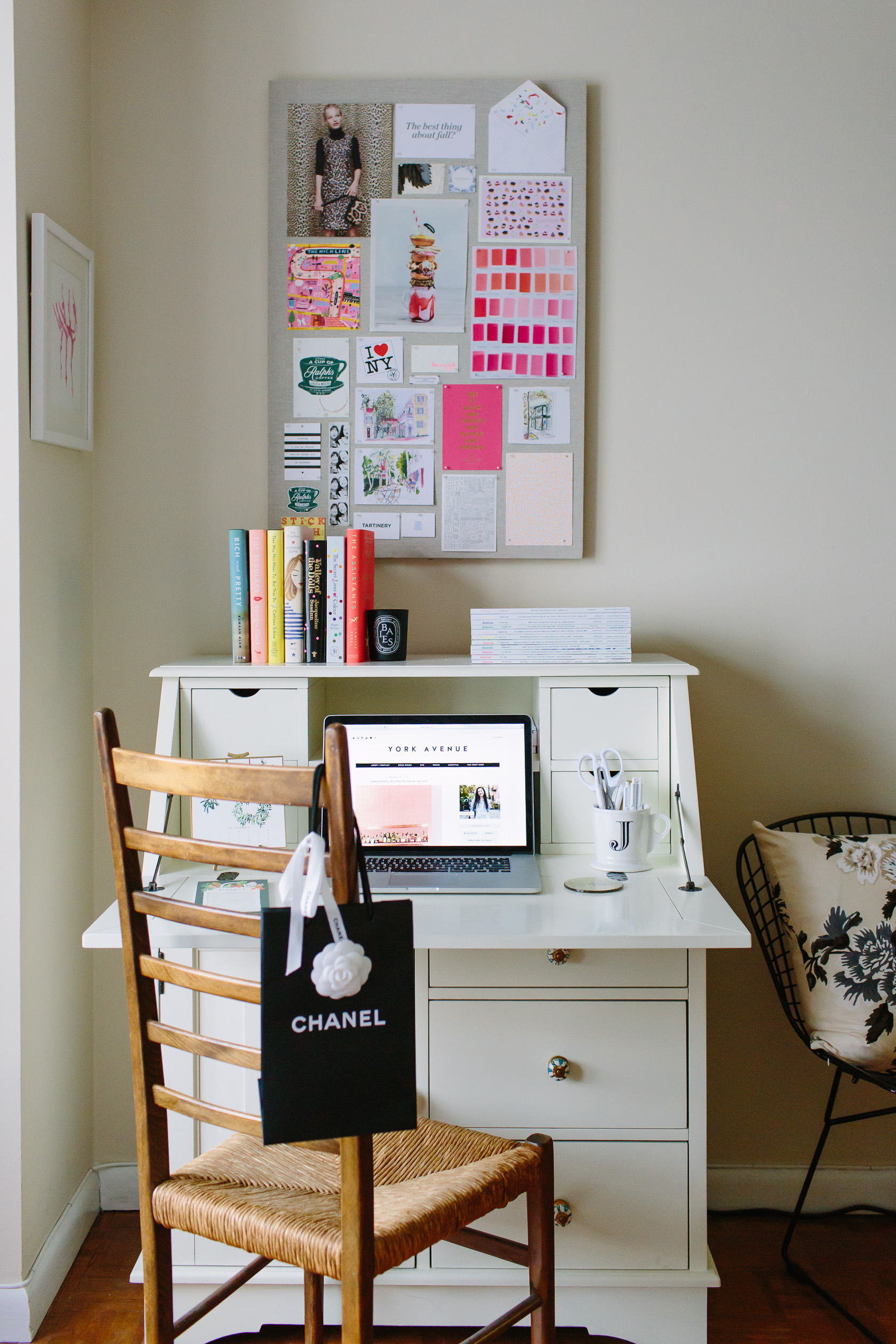 I’m one of those people who, as a kid, was always changing the furniture around in my bedroom – trying new arrangements, making my parents move various vintage pieces they had on hand into my space, etc. And as much as I love my current apartment and am super lucky to live in it, one thing that frustrates me is that its petite proportions make it difficult to change the furniture around in any major way.

But, I did recently make one change by getting rid of my vanity. I loved my vintage vanity (see the makeover I did on it here), and I still think it’s an amazing piece, but it wasn’t super functional (I never sat at it), and I just wanted a change – so I decided to put my desk in the spot where the vanity used to be. I wanted to make a little bit of a desk “nook,” and putting it there created a spot on the wall where I could finally hang an inspiration board (something I’ve always wanted). This arrangement didn’t last long, but before I dive into that, here’s a peek at my inspiration board (which I’ve also changed up a little since): 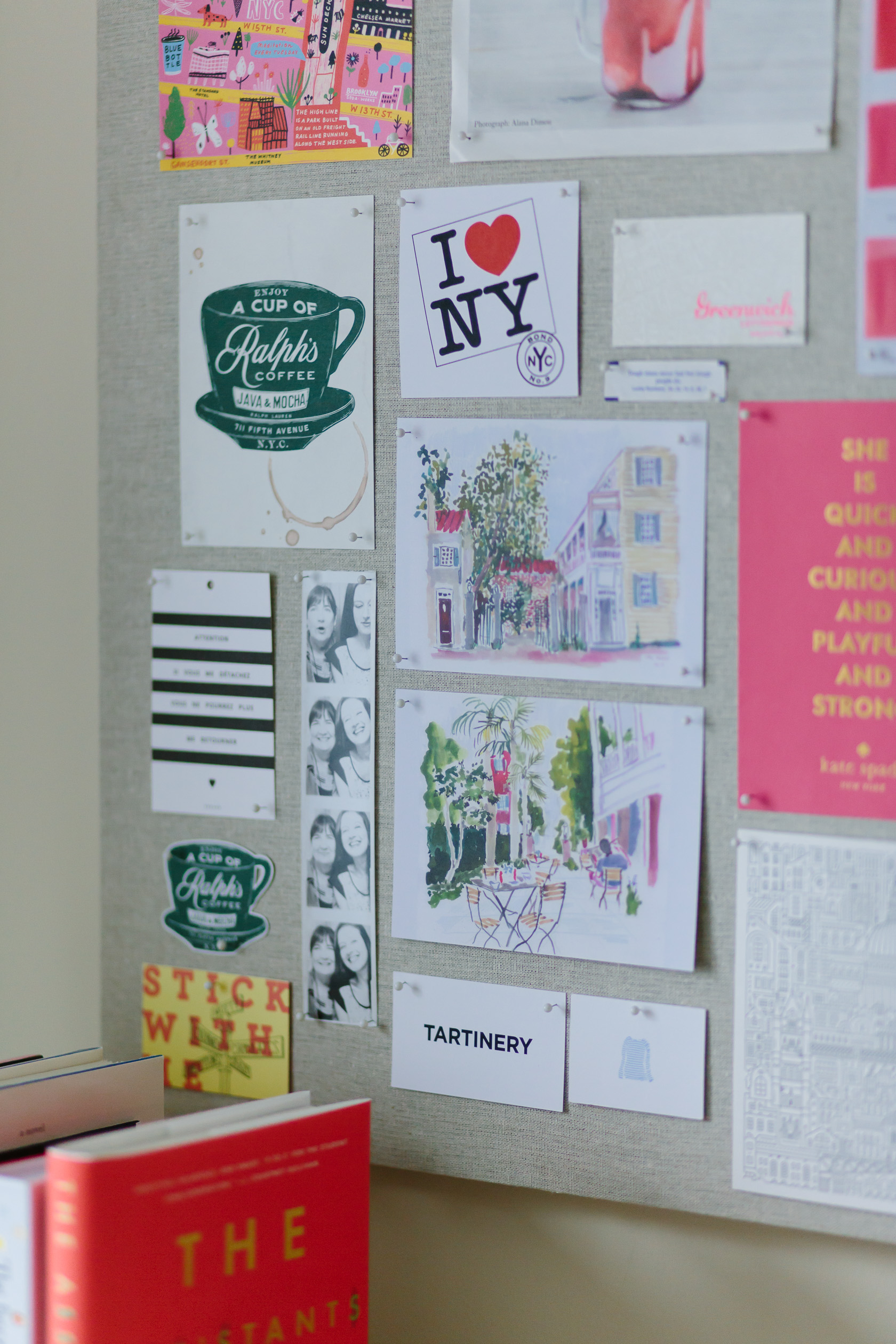 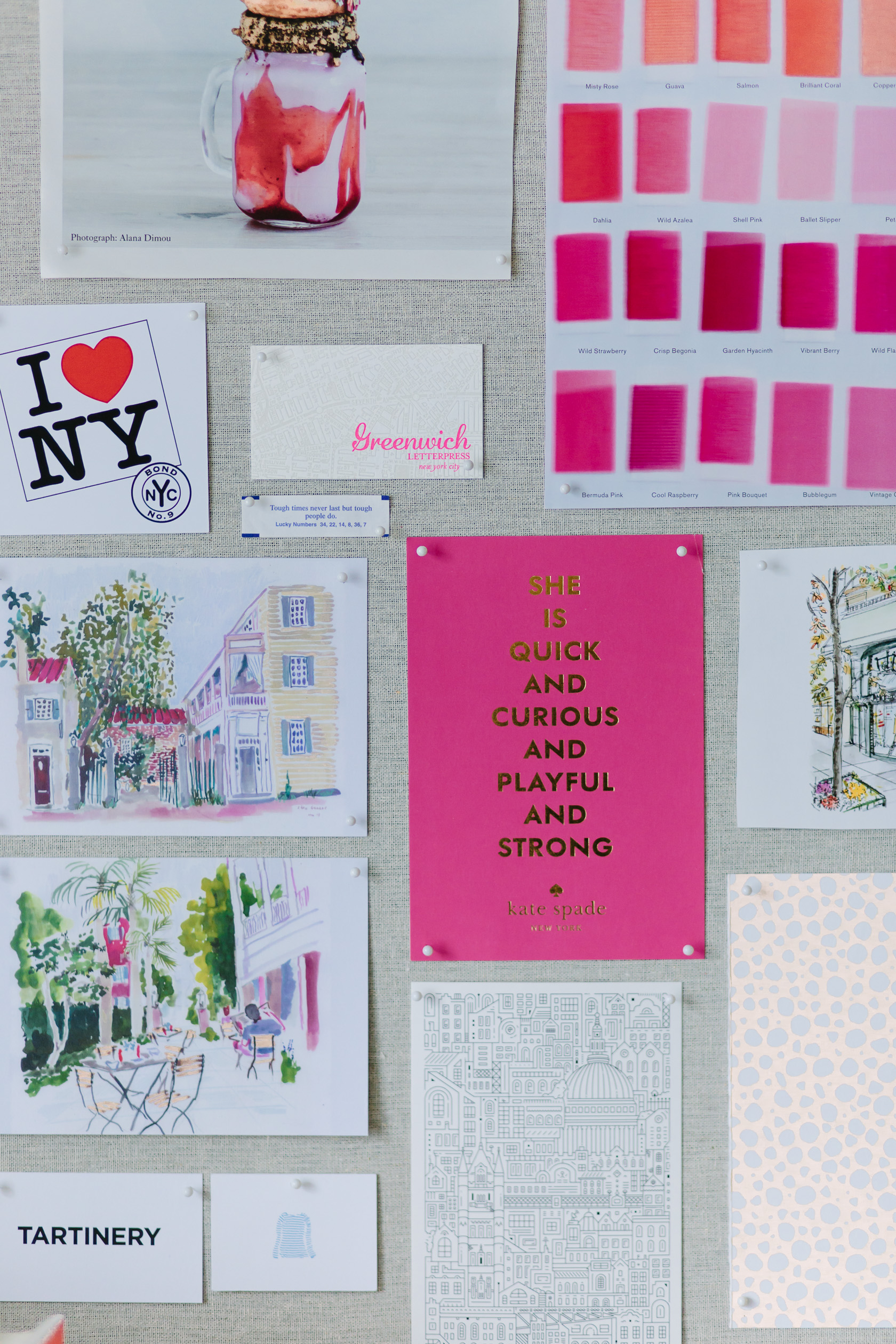 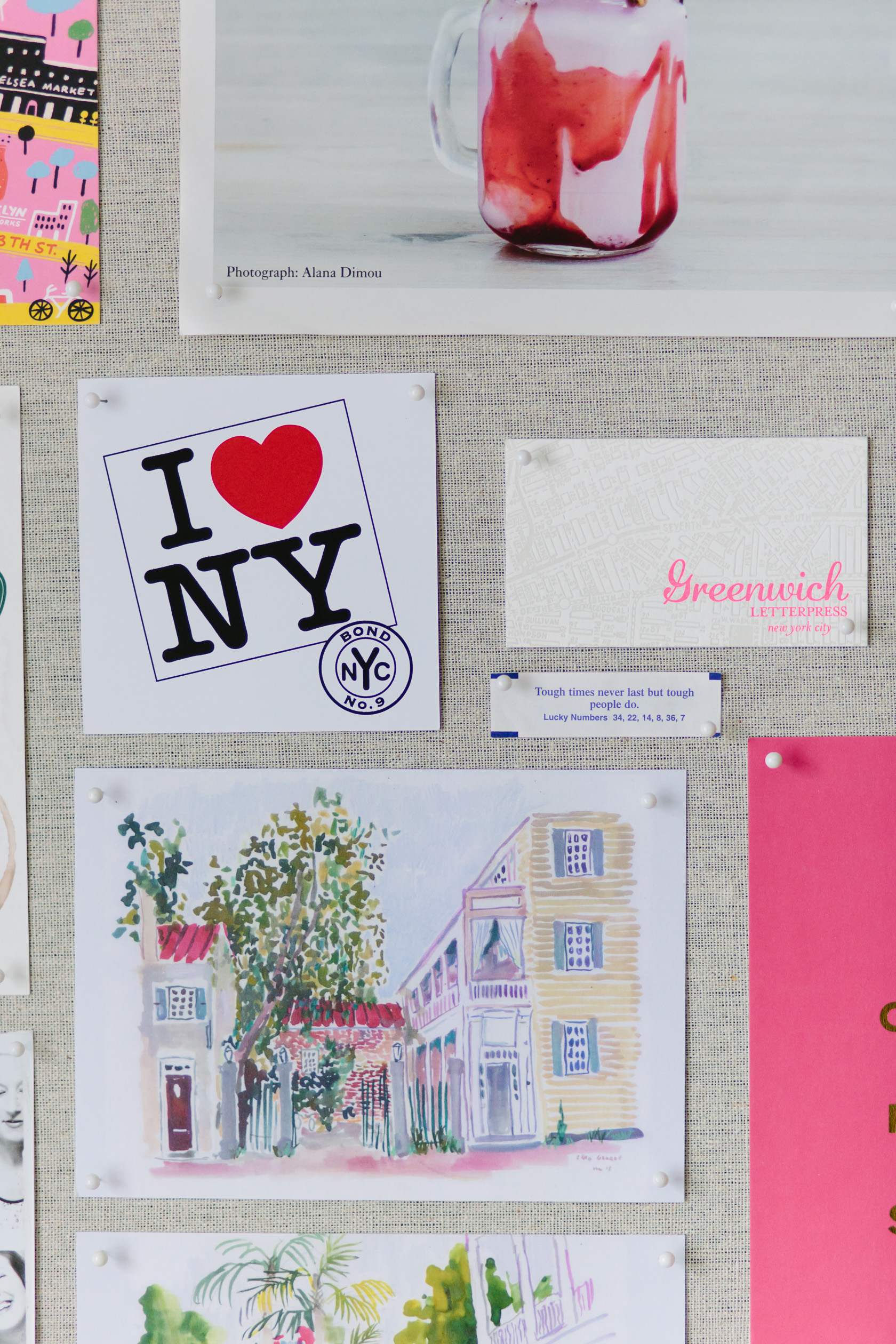 Those cute little postcards are illustrations of Zero George by Happy Menocal – I got them when we stayed at the hotel. They’re so pretty and such a nice reminder of a wonderful trip. 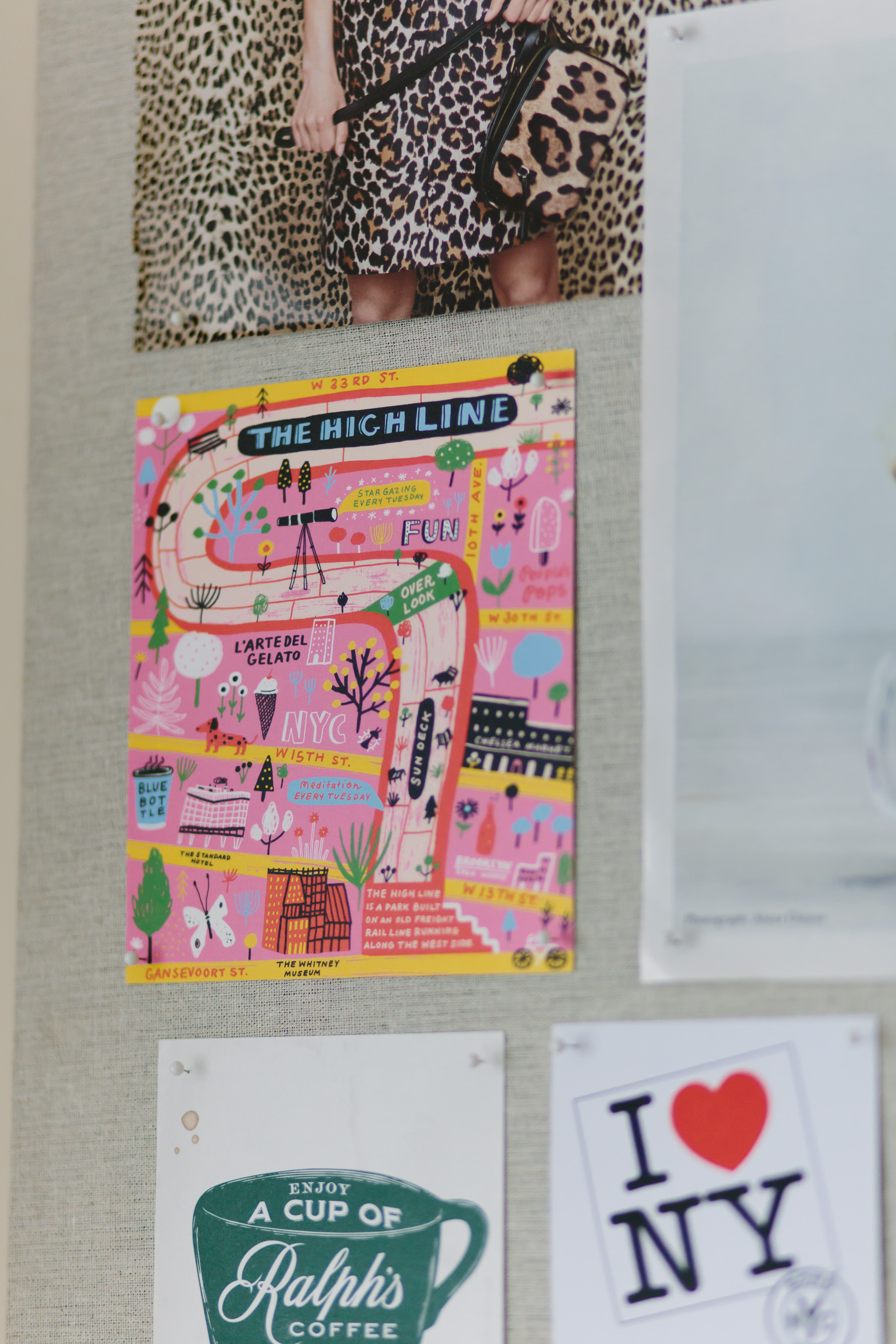 Moving the desk to the corner left a hole where it used to be, like so:

I couldn’t really figure out what to put there – a small loveseat? A bookshelf? A big chair? The problem was that no matter what I put there, if it didn’t jut out from the wall (like my desk did before), it was going to be the dreaded “furniture lineup” – ya know, where it’s just boom boom boom – three pieces of furniture against the wall in a row. Having something just out adds dimension and interest and just breaks it up. For a reminder, here’s what it looked like when my desk was there, jutting out: 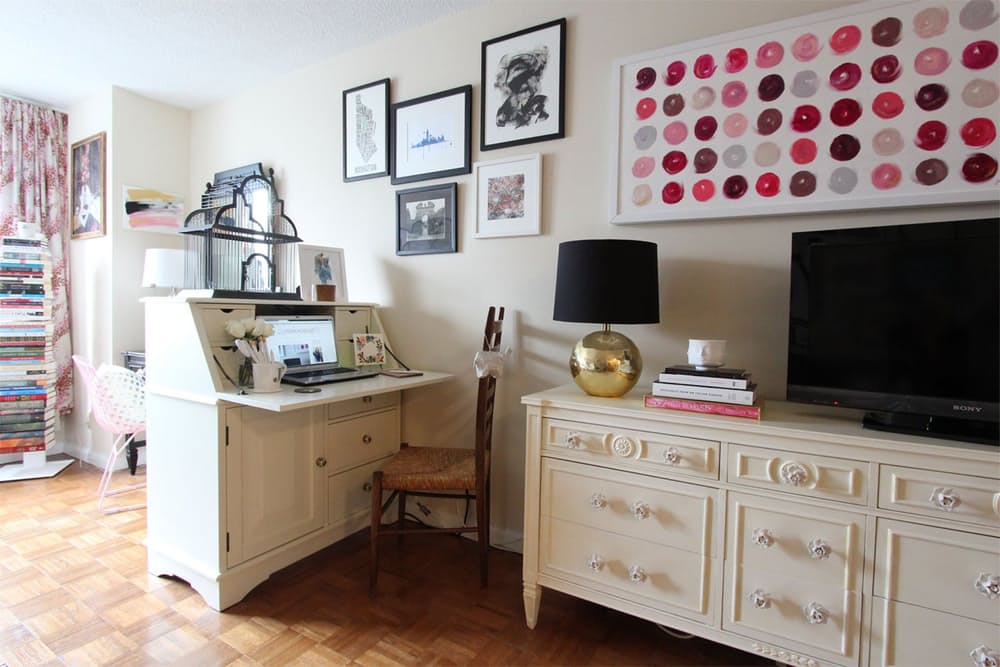 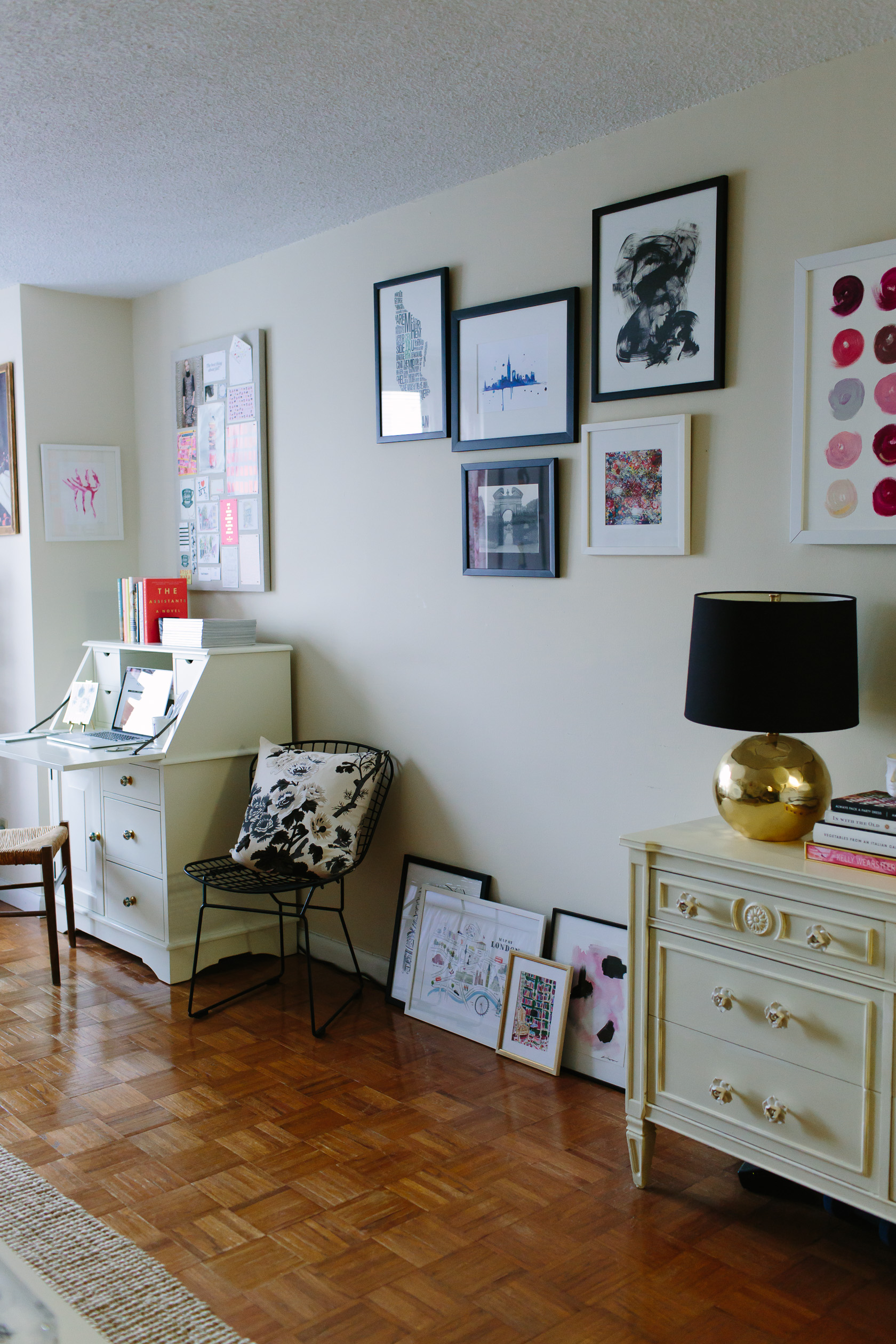 Now what I’m left with is an empty space behind the desk, where the vanity used to be: 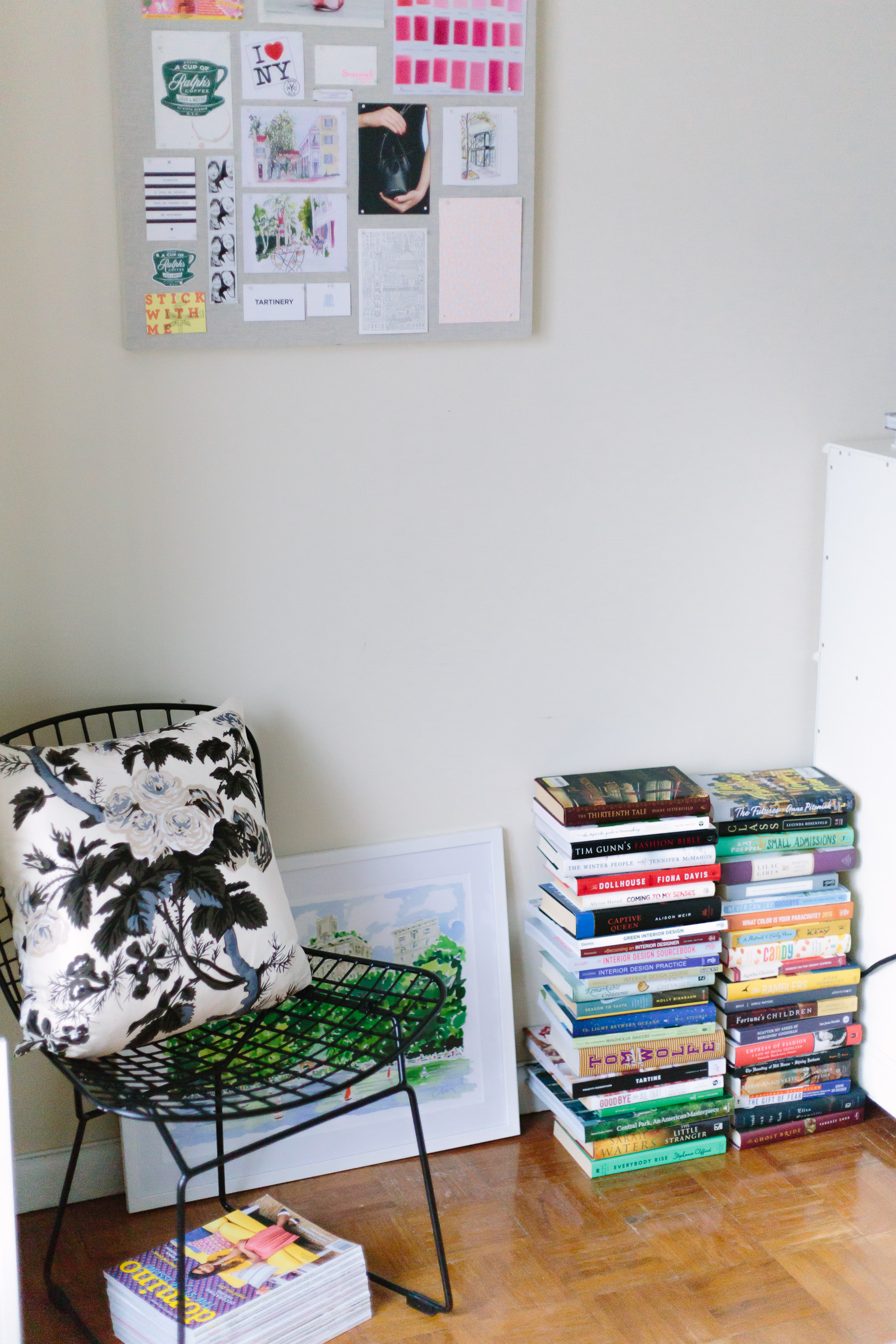 For a little bit I was considering getting this comfy linen chair in Petal (which I love), but overall it seemed like it might just jut out too far and not fit really well in the small space.

So, I’ve decided that the best option is…a new bookshelf! That shouldn’t come as a surprise to anyone who knows me and my obsession with bookshelves. At first I was going to go with the Ikea Billy bookcase, but I think it might be too skinny (width-wise), so I’m thinking of opting for the Ikea Hemnes, which is 10 inches wider and also a few inches deeper. I like that the Hemnes is on legs, but I’m not crazy about the white stain – kind of wish it was just crisp white, but I guess I could always paint it (I probably won’t though, hashtag lazy). Anyway, this is going to free up a lot of space on my Expedit that I can use for additional storage, so I’m psyched about that – plus I’ve been dying for a traditional bookshelf. Now I just have to figure out where to hang all that art that’s sitting in the corner (and the inspiration board, oops).

What say you? Any other ideas for that corner? Is it going to look weird to have a regular bookshelf next to the vertical bookshelf? Thoughts and ideas welcome!