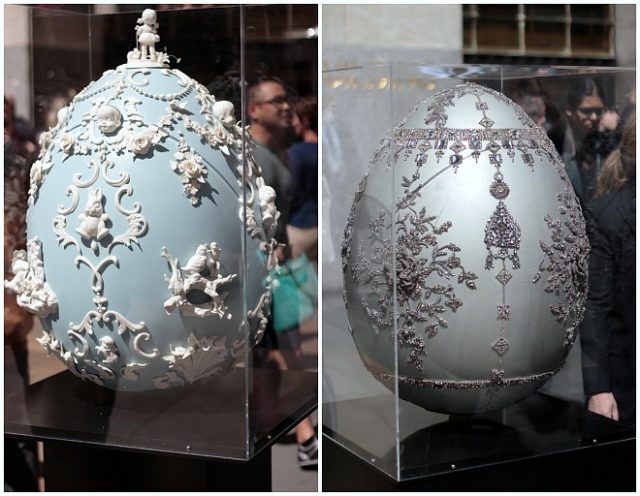 In the beginning of April, New York City did something so cool. They teamed up with Faberge to host a gigantic, city-wide Easter egg hunt for charity, called The Big Egg Hunt NYC. They took these 2 and 1/2 foot tall eggs, gave them to over 260 artists, designers, architects, sculptors (and more), and pretty much told them to just have at it! It’s absolutely amazing how these artists took the exact same shape and dimensions, and just got so incredibly creative with it. Then the eggs were taken and hidden in plain sight all over NYC. Some were inside stores, buildings, hotel lobbies, and more, while others were just right out there on the sidewalk (many not even under glass). How cool is that? They even had a “Where’s Waldo” egg that kept changing locations. There was an app to download so that every time you found an egg you could scan it to see information about the artist and the inspiration behind their piece, and then the more eggs you “collected,” the more entries you gained into a sweepstakes to win big-ticket prizes from Faberge. I just think this is the coolest thing. It’s almost like giving a bunch of artists a blank canvas and just asking them to create whatever they want…except instead of a flat canvas, it’s a giant three dimensional egg! I love how they’re all the same dimensions, but completely different – it’s like there’s no limit to how imaginative people can be. The gray egg in the picture above is by Marchesa – it looks just like one of their gorgeous Oscar gowns! 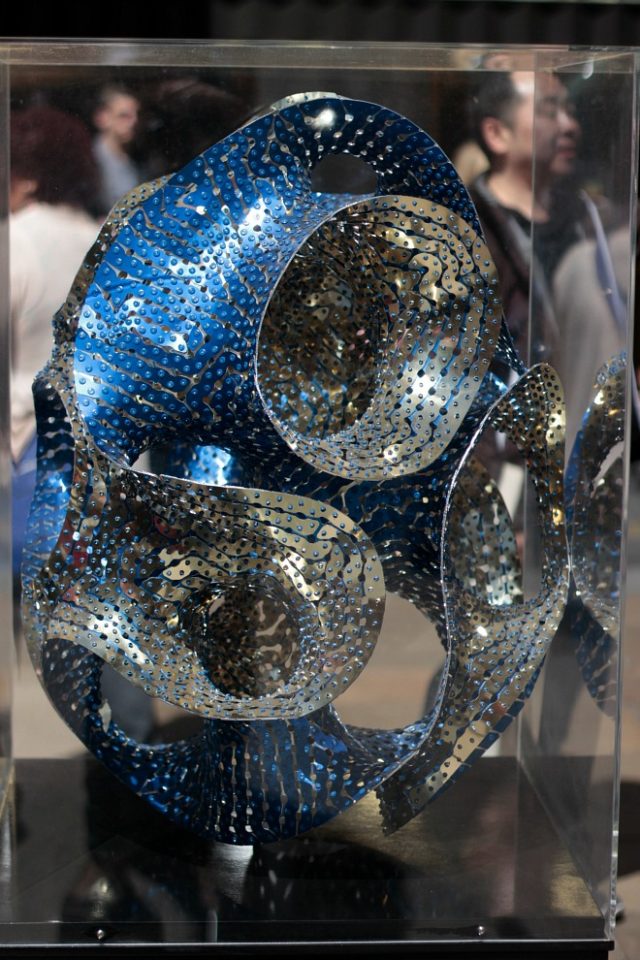 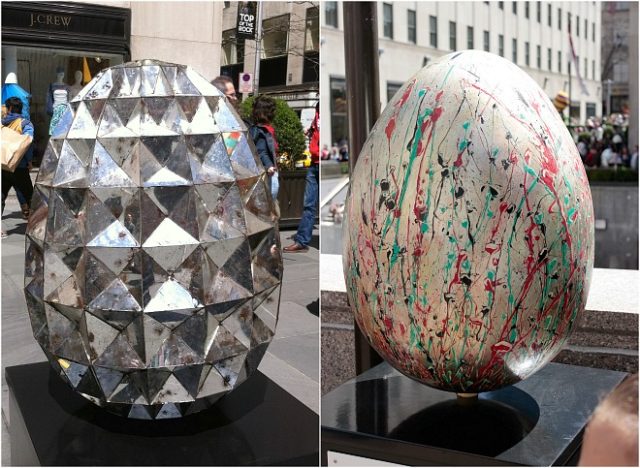 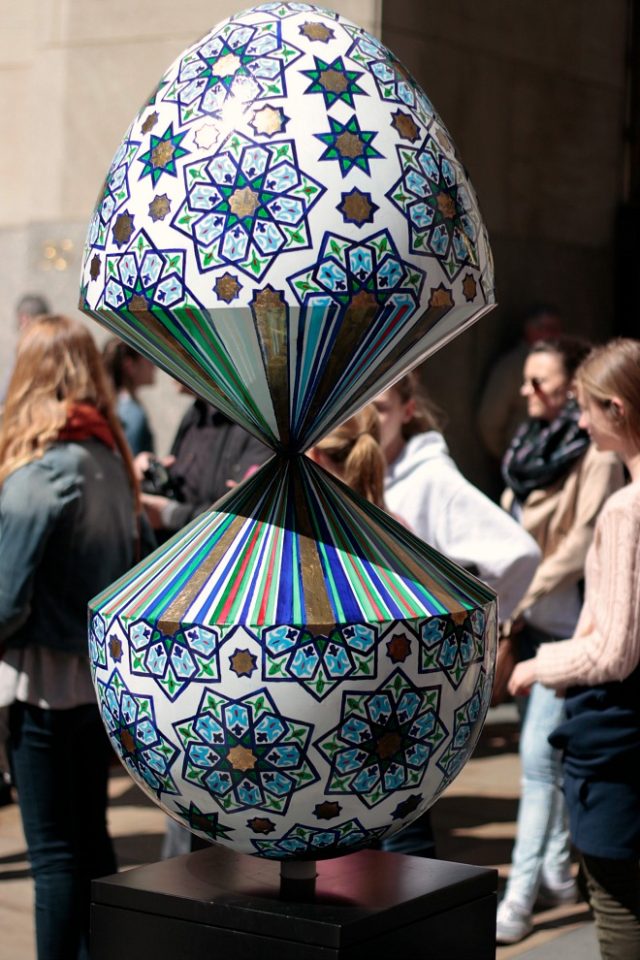 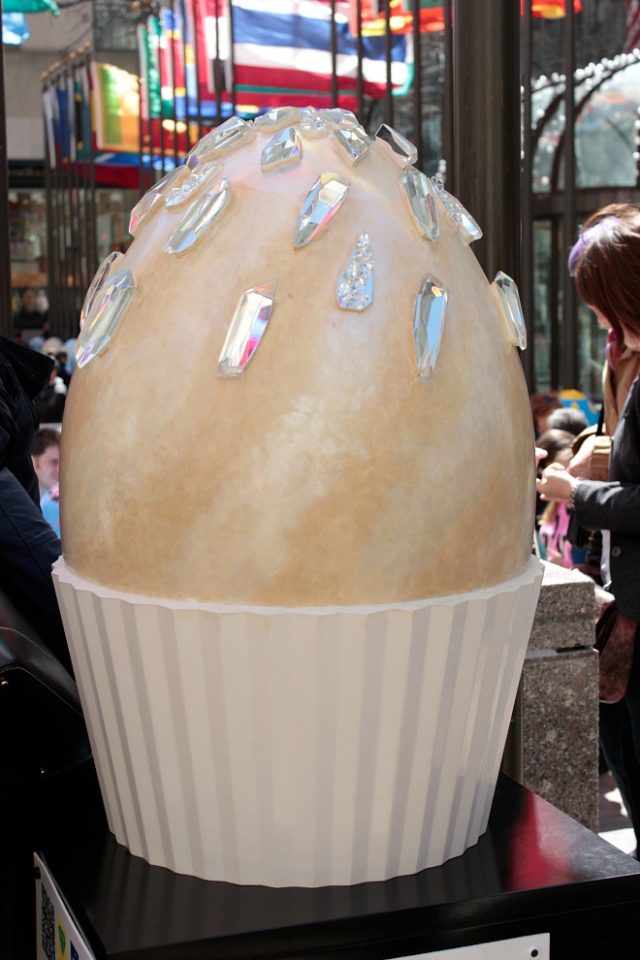 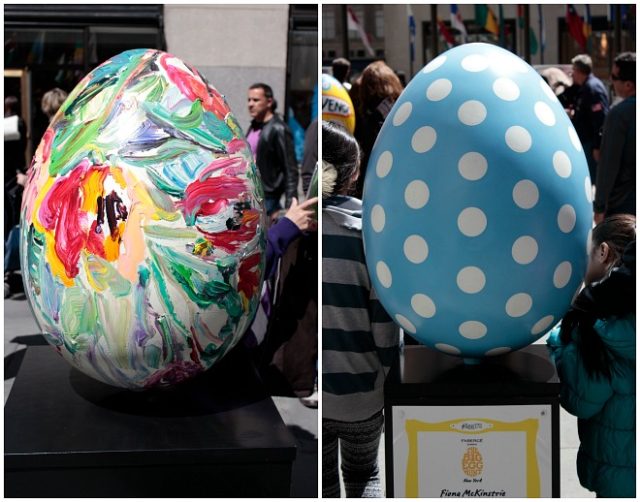 I loved the colorful brush strokes on the one on the left. 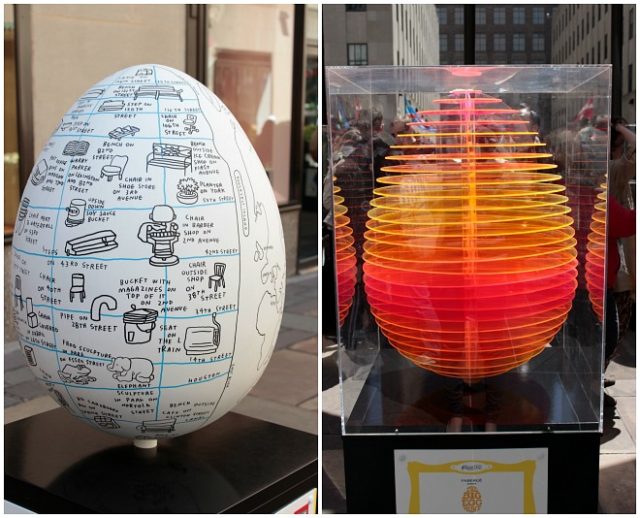 On the left is Warby Parker’s egg…an artist drew a map of all of the best places to hang out and read a book in Manhattan. Pretty cool! 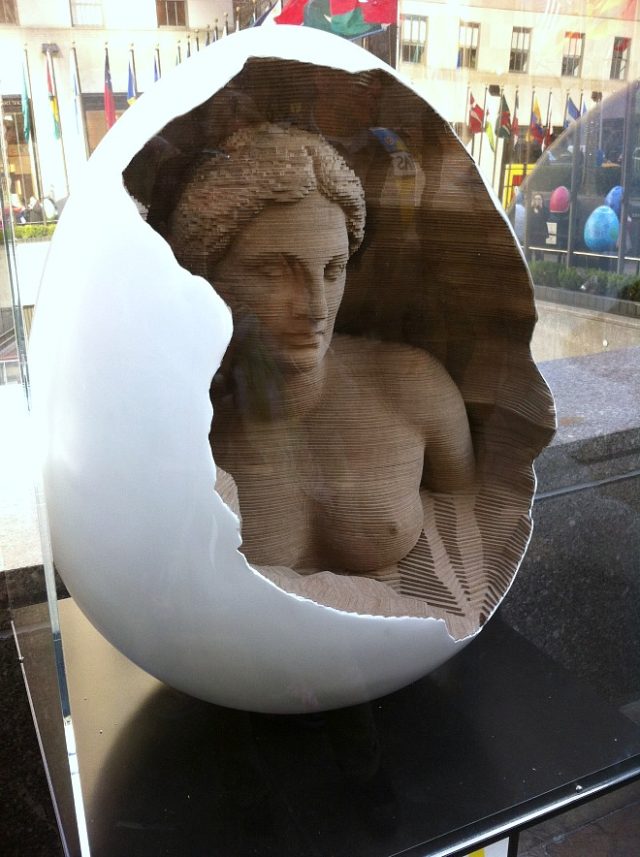 This one was hidden at The Metropolitan Museum of Art…very apropos. 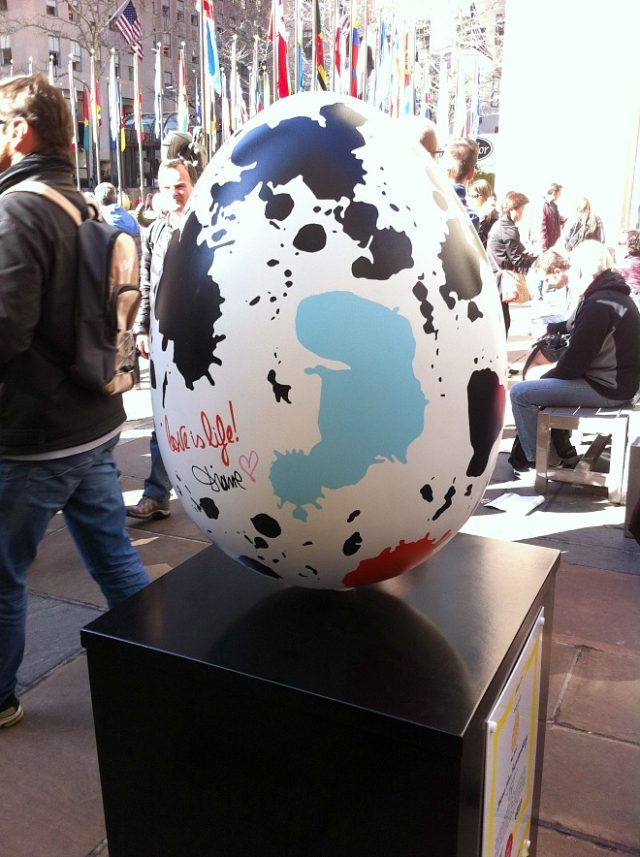 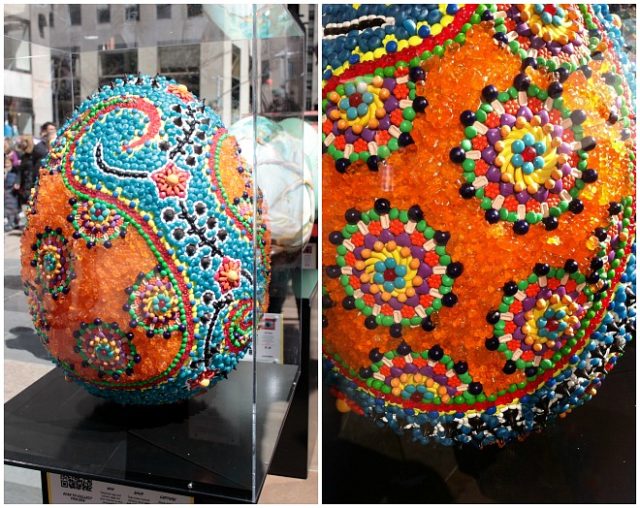 At first I just thought this one was made of beads, but upon closer inspection: candy! The orange is Gummi Bears, the yellow is banana Runts, and the beige one is Pez. 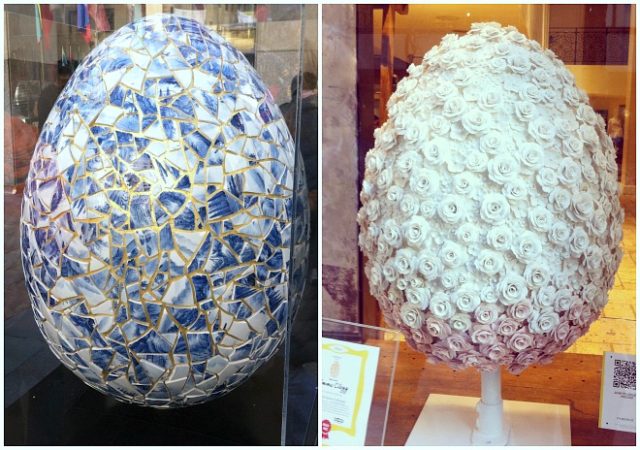 That GORGEOUS white and pink floral egg by Emma Clegg was hidden in the window of Mulberry during the egg hunt. After the hunt ended about a week ago, all of the eggs were gathered up and placed on exhibit at Rockefeller Center so everyone could see them (that’s where I took most of these pics). I was disappointed that the floral egg wasn’t on display (I’d seen it on Instagram and thought it was lovely). Just as I was leaving though, I happened to spot it in the window of Anthropologie at Rockefeller Center! I was so surprised and happy, because it was one of the ones I was hoping to see – and I loved that it was still a little hidden. 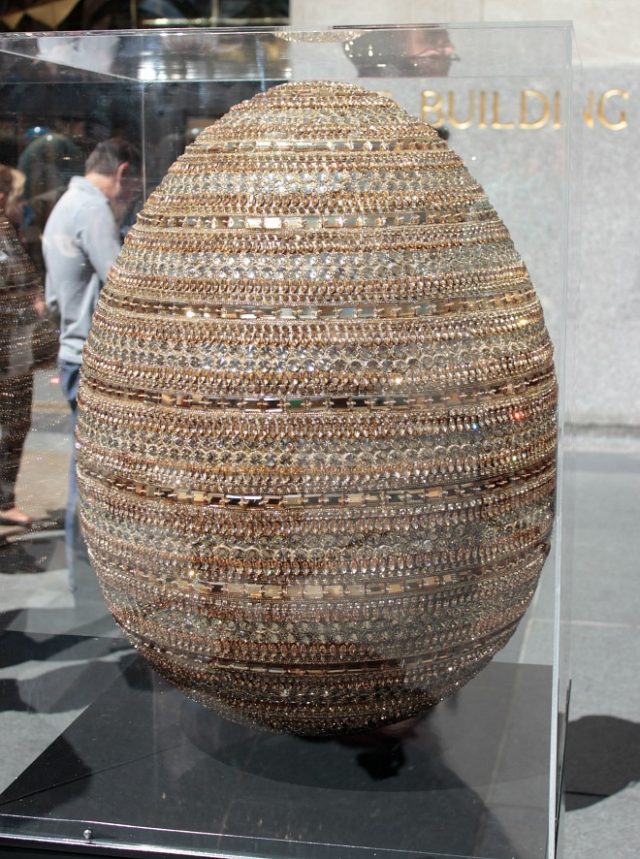 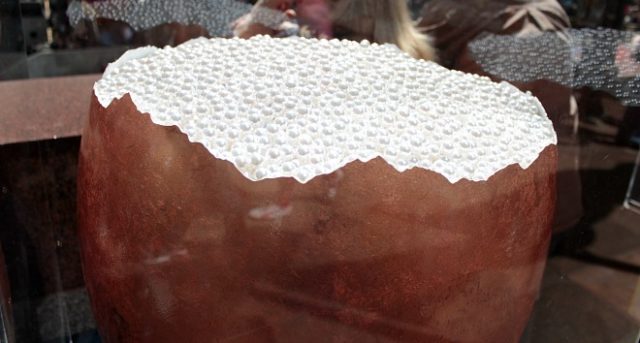 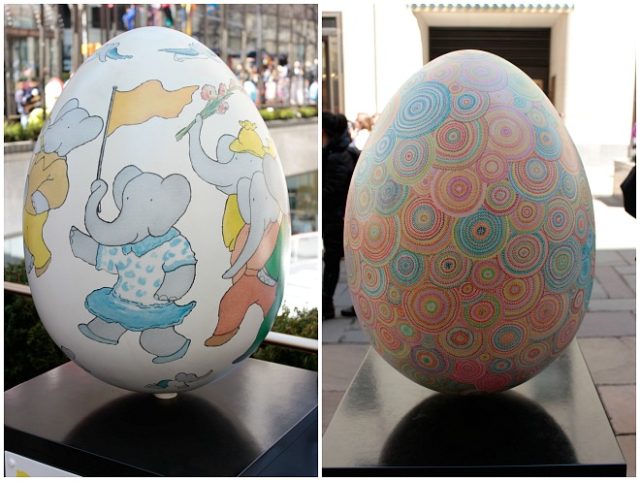 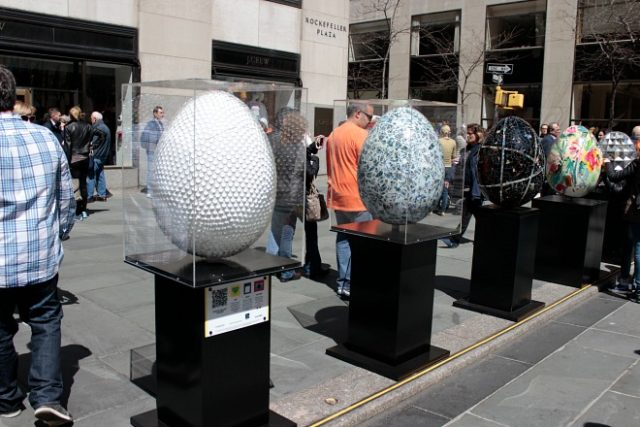 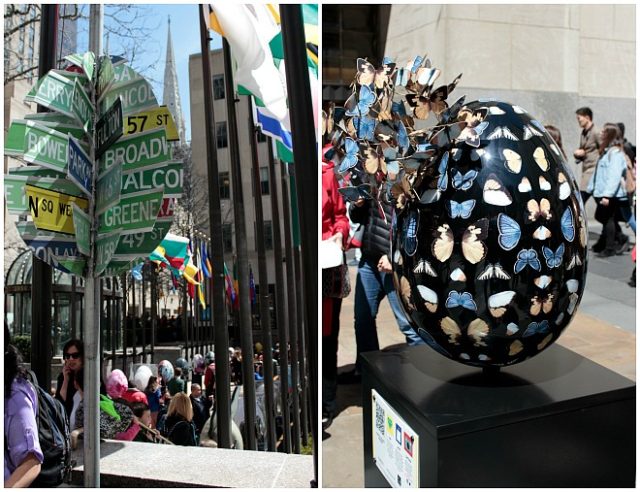 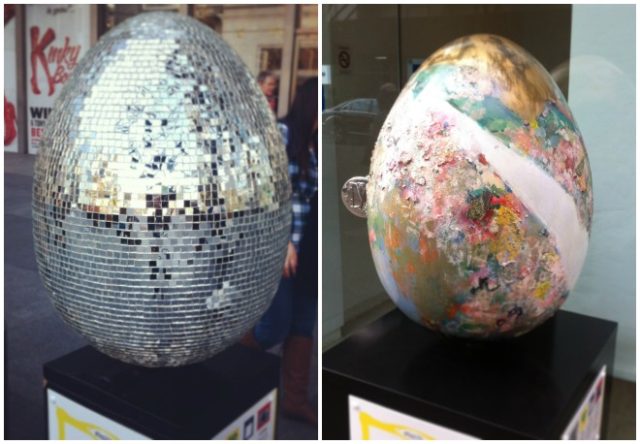 These were the only two that I discovered as I was walking around the city while the actual hunt was still on – the disco ball looking one was at Columbus Circle, and the gorgeous painted one was just out on the sidewalk on the Upper East Side. I didn’t actually know about the egg hunt while it was happening, but after discovering these two I looked into it and became aware of this whole cool thing. Then I was super pissed that I hadn’t known about it, because I would have loved to search for eggs around the city and get to explore different neighborhoods at the same time…but I was pretty psyched that I found these two anyway. Especially since they’re two of my favorites – how pretty are they?
The only egg that I didn’t get to see, which I really, really wanted to see, was this one. Pretty unfortunate, because it was “hidden” in a store very close to my apartment! It immediately reminded me of the Alessi blow-up basket that I blogged about here, and I would have loved to see it in person.
If you happened to have a few extra thousand dollars lying around, one of these beauties could be yours – they auctioned some off at Sotheby’s last night with all proceeds going to charity. You can check out the bidding and prices here – some are going for as high as $14,000! Anyway, if you’d rather spend your thousands on something else, you can still get to see the eggs (for free) at Rockefeller Center until Friday.
all photos by me