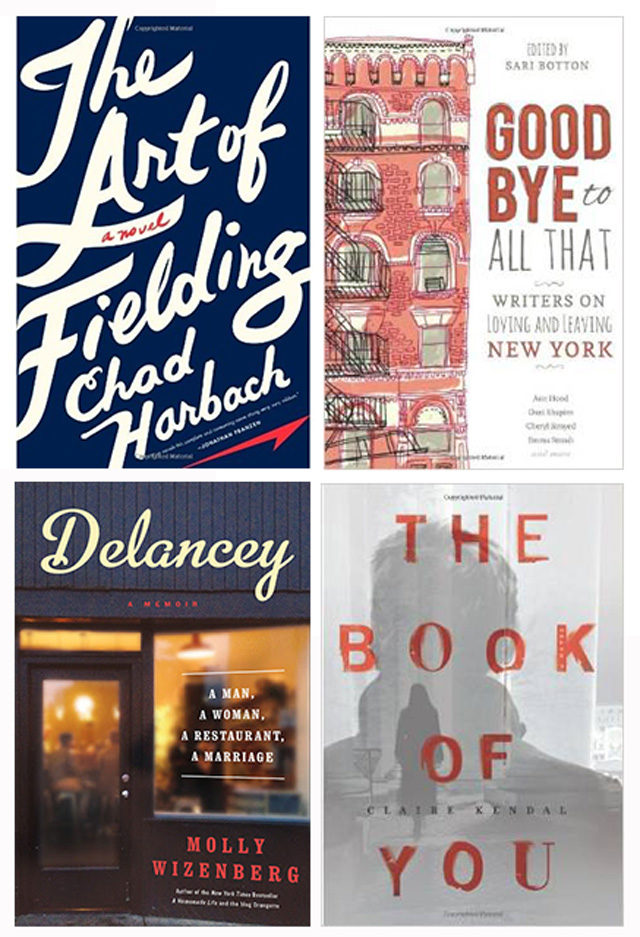 Today I’ve got a little round-up of the books I’ve read in the last few months that I really enjoyed, and would very much recommend (see another here, if you missed it). I’d like to make an effort to do book reviews more regularly! It’s tough because I do wind up reading a decent amount of things that I don’t enjoy, but I never really wanted to write about those books (just seems negative and kind of mean). If you’re just burning with curiosity, you can always check out my Goodreads. Anything you see that shows up on there and not on the blog well…you can guess how I felt about it! Onto the good stuff:

1. The Art of Fielding: This book was one of the best that I’ve read in a long time, which I’m sure everyone already knows because I’m way behind the times on this one! I wasn’t sure if I would like it since at first glance it’s a book about baseball, but I was completely wrong. It’s about way more than baseball. It’s about relationships, psychology, pressure, people’s inner lives, expectations…it encompasses a lot, and the writing is just amazing.

2. Goodbye to All That: This was one that I started off feeling “meh” about, and by the end I was totally hooked. I love reading about NYC but at first I felt like I wouldn’t be able to relate to any of the stories. However, as the essays progressed I did find a few that I could relate to, and even those that I couldn’t, I still enjoyed. I also found that as the stories went on, (not sure how to say this), it felt like they got more…modern? Not sure if that’s the right way of saying it, but it felt like as the book progressed more and more of the stories seemed to be from women closer to my age, or just felt more relevant to me. For an example, the essays in the beginning seemed to talk more about NYC in the 70’s and 80’s, then as the book moved on it was talking more about NYC in the 90’s….does that make sense? It was like a sense of time moving forward as you read on, which I’m assuming was done on purpose.
My favorite essay was a reprinting of My Misspent Youth by Meghan Daum, which originally ran in the October 1999 issue of The New Yorker (unfortunately, doesn’t seem to be available to read online). It’s the one I’m still mulling over.
I obviously love New York City and love living here, but I often don’t really think about it…it’s just the place that I live. But reading this book, it was so interesting to see how Manhattan really meant something to these writers. To some it meant negative, horrible things. To others it meant everything. But to all twenty-eight writers, New York City was an entity, a character that played a huge role in their lives. And who knows, maybe when I look back, it will be for me as well.

3. Delancey: I really enjoyed Delancey, the story of Orangette’s Molly Wizenberg, and her husband Brandon, opening a restaurant soon after they got married. It seemed to be more about the restaurant than about their marriage, but that didn’t bother me. If you like foodie memoirs, I think you’ll enjoy this and also Molly’s first book, A Homemade Life. I just like her and her writing, and I found the process of building a restaurant from the ground up (literally), testing dough recipes, buying dough mixers on Craigslist – really interesting. I’m actually planning on making some of the recipes she included too, like the penne alla vodka.

4. The Book of You: I read this based on Alyssa’s review, and it was just super creepy and freaky and entertaining and a stay-up-all-night page turner. You have to be into thrillers to read this one, and you have to kind of have a thick skin too, because there was some horrifying imagery thrown in there. I did have some issues with plausibility over one central point, but I don’t want to give anything away, and it didn’t really impact my enjoyment of the book anyway. I thought the author, Claire Kendal, did a good job of rendering the creeping sense of hopelessness, isolation, and loss of control that the main character felt, which really added to the dark atmosphere and sense that something very bad was about to happen.