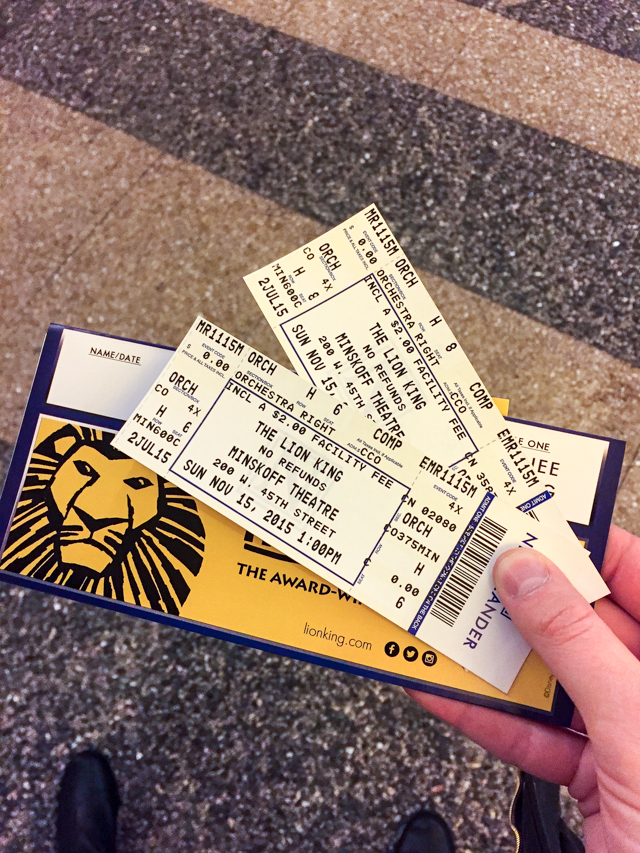 Before this I didn’t know much about The Lion King, aside from the fact that it had won Best Musical and tons of other awards. I knew that it would be a high-quality play, but wow. It was even better than I expected! First of all, the acting and music were superb – but what really makes the play unique are the costumes. We had the chance to talk to two members of the costume department after the performance (awesome), and they gave us an insider perspective on the puppets and costumes used in the play. 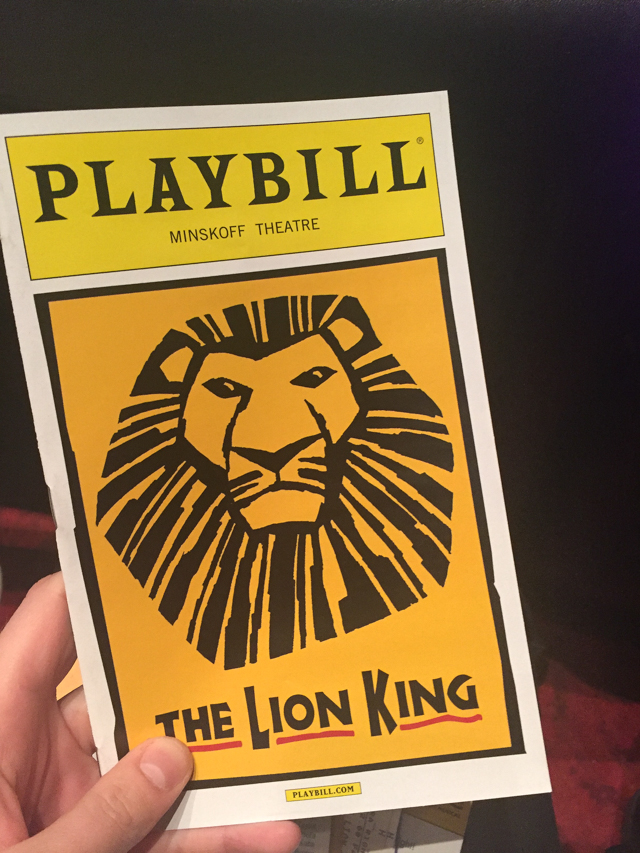 The Lion King was directed by Julie Taymor, and I was impressed to learn that she designed all of the costumes as well! Talk about multi-talented. Taymor conceptualized the play as a “double event” – you have the actor, and then an animal puppet (over 200!), which is attached to the actor and integrated into the costumes in the most interesting and creative ways (they’re called “puppets,” but I have to point out, these aren’t what I picture when I hear the word puppet – these are more like beautiful pieces of art). The double event concept means that the audience sees the acting and the emotion of the human, and almost transposes it onto the puppet. You can also view the play in two ways – focusing on the animal (puppet), or the actor. It’s hard to explain, but it was truly such an unexpected and smart way to conceptualize a play that stars only animals. I mean, that takes some creativity, to figure out how to do that – to not try to hide the humans inside some sort of animal costume, which would be the natural inclination. 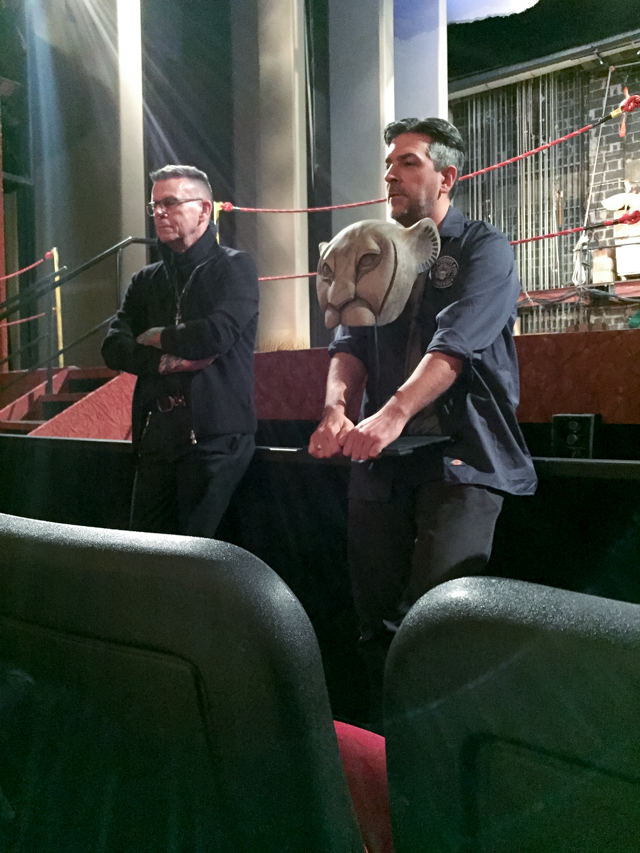 The puppet is also integrated so seamlessly with the actor that it’s almost as though they move as one – and they need to be able to move. For example, the headpiece for Nahla (in the picture above) weighs only three ounces (less than a banana!) – which is necessary because the actors have to learn to act and move with these puppets attached to them. Speaking of movement, the cast is so amazingly talented in the way they use their bodies to inhabit the animal characters. There was gymnastics, there was ballet, there were amazing jumps – at certain points the actors almost appeared weightless. They were athletic and muscular, yet so graceful and light on their feet – just like many animals! 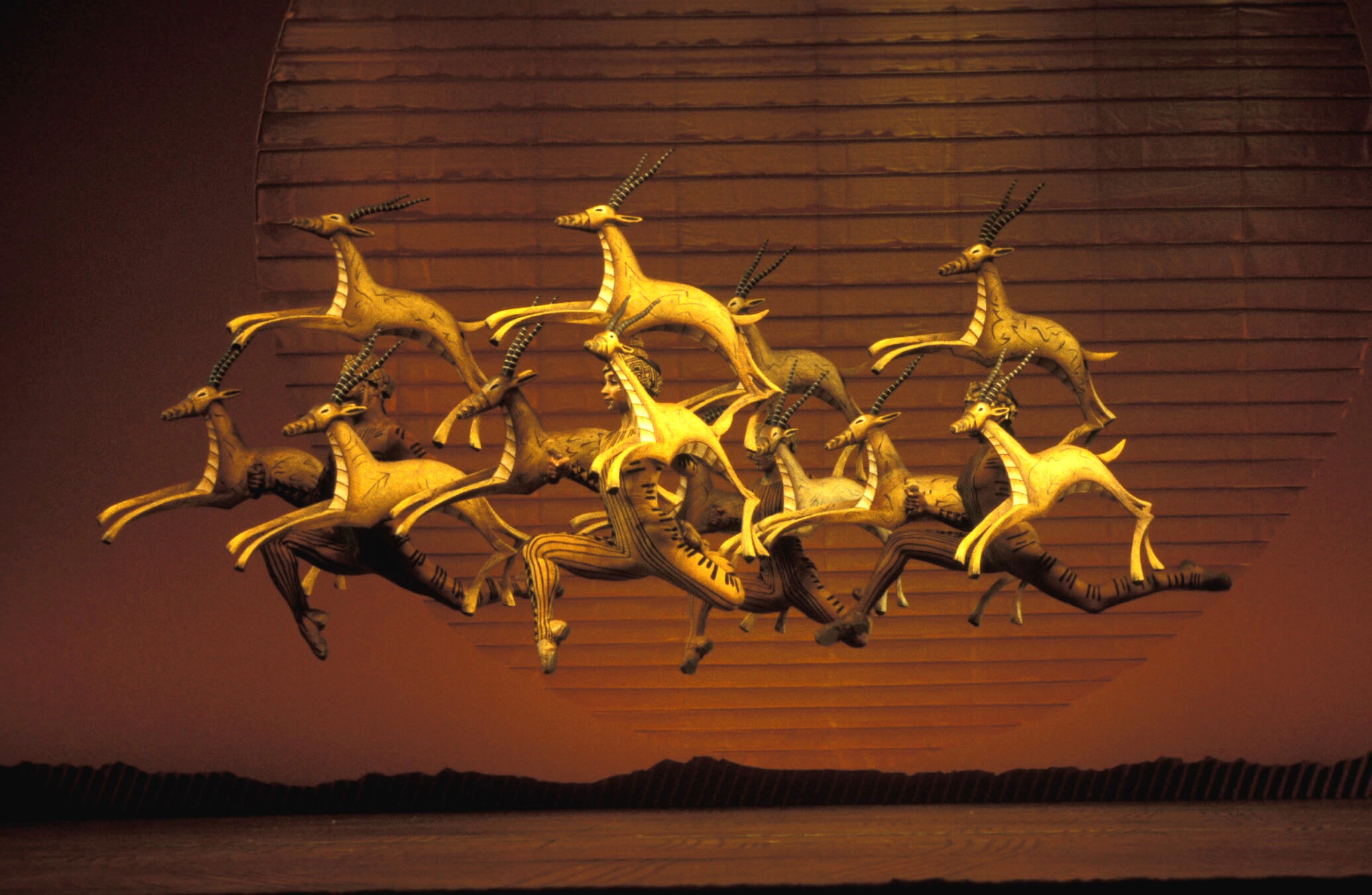 This picture (not taken by me) is a great depiction of the “double event.” (image source)

After the performance we were also lucky enough to get to chat a bit with L. Steven Taylor, the actor currently playing Mufasa. One of the bloggers asked him what advice he would give to an aspiring actor, and his answer was so great I just have to share it here. He said that when it comes to acting, or building any career at all, always keep adding to your “bag of tricks.” He told us about a time he was at an audition for a play, and it was whittled down to him and two other guys who looked exactly like him. The director randomly asked if any of the actors tumbled (as in, did gymnastics), even though the play had nothing to do with tumbling. Funnily enough, Steven actually could, as he was on the cheerleading team in high school. He did a tumbling pass, and he didn’t get cast in the play…but, the director was casting for a movie in which one of the roles involved tumbling, and that part went to him! So, this random skill that he had, which you wouldn’t necessarily think you need as an actor, came in handy and got him a job. He also told us about an actor friend of his who randomly knew how to knit, and got cast in a play where he had to do just that – not pretend to knit, but actually knit – throughout the course of a play. So, the point is to learn as much as you can and be open-minded to acquiring skills that may not seem applicable to your career – because the deeper your bag of tricks, the better off and more hire-able you are.

And now for the giveaway! One lucky reader will win two tickets to The Lion King on Broadway on Thursday, March 3rd, at 7pm. The contest runs through next Monday, and this would make such a wonderful holiday gift! Good luck!

Terms and conditions: Tickets will be held at the box office for redemption up to 2 hours prior to performance time. To redeem tickets, a valid government issued identification of the winner of the tickets must be presented. Offer not valid on prior purchased tickets and may not be combined with any other offer. No exchanges are valid on tickets. Tickets are not transferrable. Blackout dates and other restrictions may apply. Dates, times, and cast subject to change without notice. Offer may be revoked without notice. Offer expires 12/31/15.