Anyone who knows me knows of my fondness for Dominique Ansel Bakery in Soho. I wrote about the bakery a few years ago and have visited countless times since then. Even though it became a big tourist destination and a bit of a madhouse when Dominique Ansel invented the Cronut pastry, it’s one of the few places that actually lives up to the hype. I’m so impressed with how Chef Ansel has continued to grow his business and innovate in the pastry world without sacrificing the handmade quality of his desserts. His creations are incredibly creative but even more important, incredibly delicious! 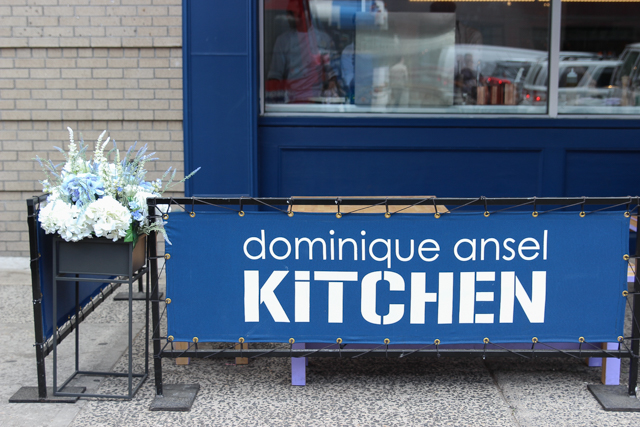 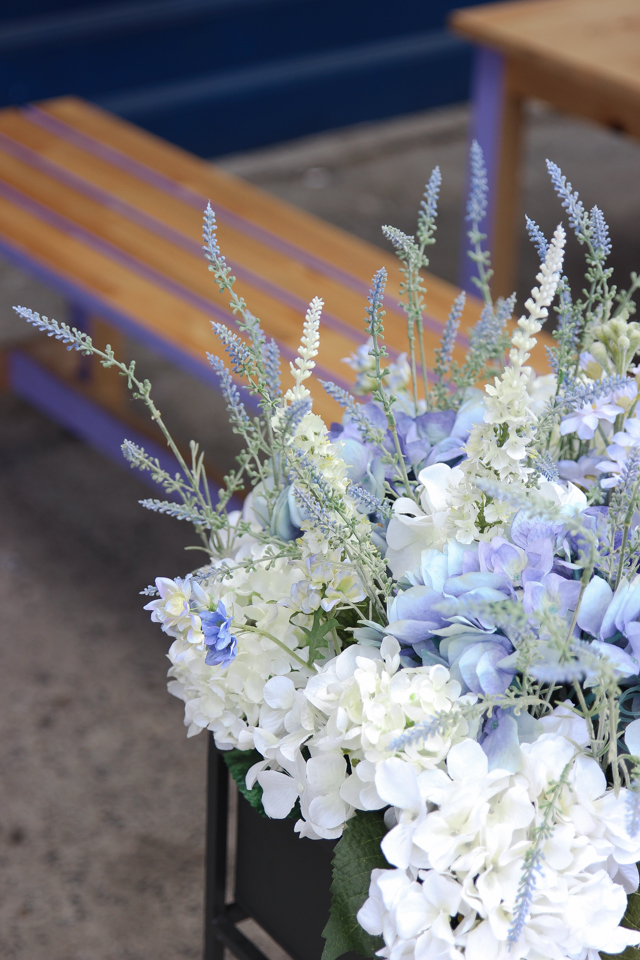 Chef Ansel’s newest venture is Dominique Ansel Kitchen, his second bakery in New York. Located in the West Village, the Kitchen introduces a unique premise: more than 70% of the menu is made-to-order. The kitchen is visible from the front of the shop, so you can watch as Chef Ansel and his team bake, assemble, and plate savory dishes, desserts and pastries. Chef Ansel’s thinking is that “time is an ingredient” – as I’m sure anyone who’s ever had a chocolate chip cookie warm and gooey from the oven knows, certain desserts just taste better freshly made! This isn’t a new concept for the Chef – in his original bakery in Soho, they’ve had made-to-order madeleines on the menu for some time. I can attest to the fact that they are incredibly delicious, in large part because they are served fresh (and also baked to perfection!). This new bakery is his continuation and amplification of that concept, and I think it’s wonderful to see something new and fresh from such a talented chef. 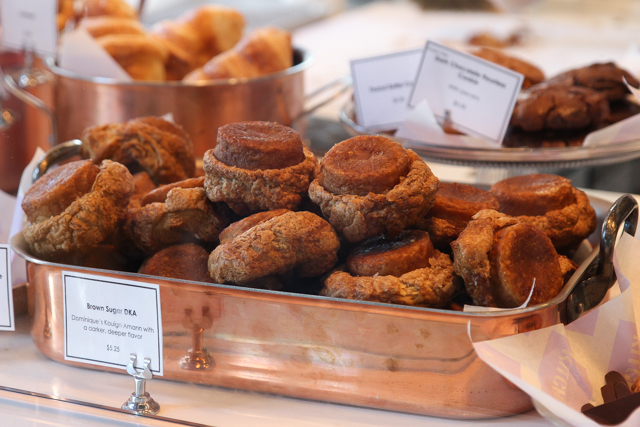 I’m especially fond of the DKA at the original bakery, since an article about it in Daily Candy was the thing that propelled me to go visit Dominique Ansel in the first place when I had just moved to the city. At The Kitchen, they have a brown sugar version, which I loved. So fun to taste a different version of a beloved favorite. 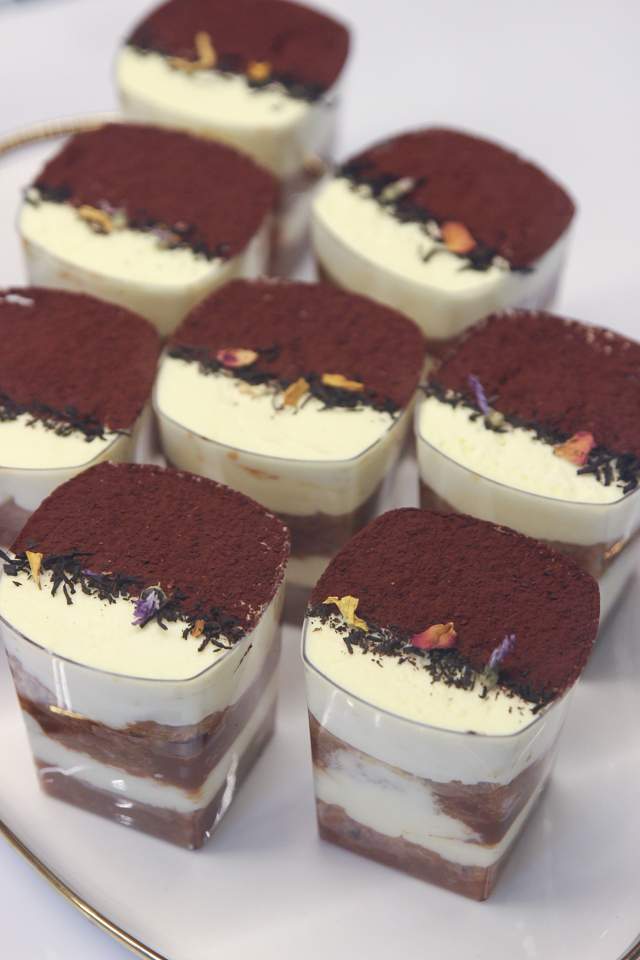 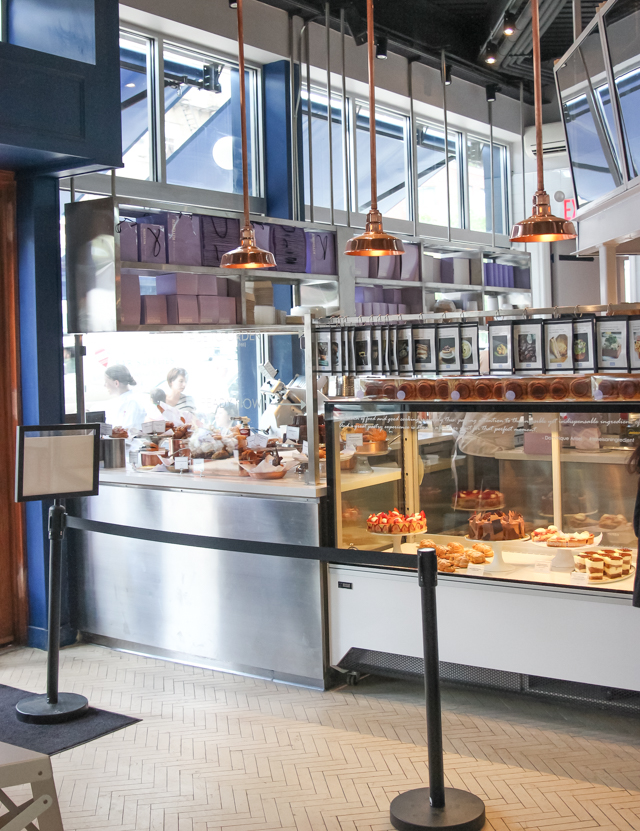 You can see the pastry chefs hard at work in the open kitchen, while waiting on line or enjoying your pastry in the stadium seating across from the kitchen:

I love the lavender menus and boxes. They continued the theme to their outdoor seating as well, where the benches are lined with lavender paint. So pretty:

The brown sugar DKA has a deeper, darker flavor than the original – it almost had a little whole-wheat flavor to me (but in a good way!). 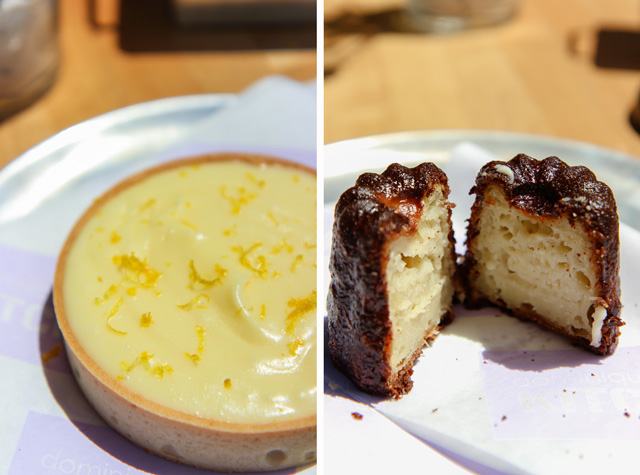 On my second visit I wanted to try a few made-to-order items. We sat outside (love that they have outdoor seating), and tried the Lemon Yuzu Butter tart, which they  mix using a milkshake maker! Anything made with a milkshake maker is a-okay in my book. It was perfectly citrus-y (but not too tart), with a smooth, silky texture and perfectly light crust…perfection. We also tried the cannelé, a French pastry consisting of a custard center with a crisp, caramelized outer shell. Delish!

I don’t even like chocolate mousse, but this made-to-order chocolate mousse was so deliciously smooth and milk chocolate-y that I may have to revise that opinion. It reminded me of the flavor of the homemade chocolate frosting that my Mom makes for our birthday cake recipe, but the texture was much lighter obviously. So, so good! 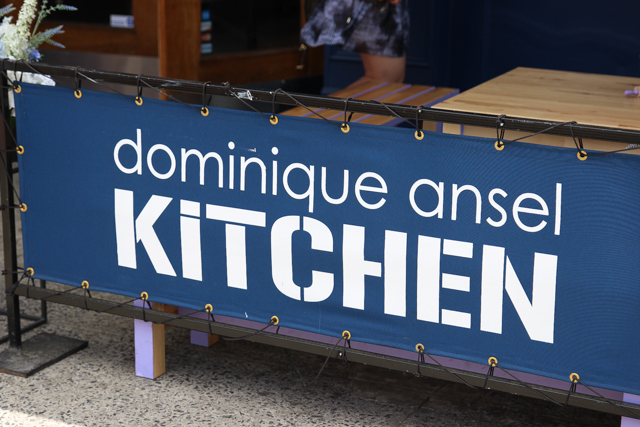 Another exciting thing happening at The Kitchen is something called U.P. (Unlimited Possibilities), which is an “after-hours” dessert tasting that will be taking place in the production kitchens (apparently on a table that descends from the ceiling!). There will be two seatings each on Fridays, Saturdays, and Sundays (a 7:30 and a 9:30), with tickets going on sale each Monday for 7 weeks out. U.P. will consist of an eight-course dessert only tasting (my dream come true) served to a table of just eight guests. You can see the first menu here, for which the theme is (fittingly) “Firsts”. I cannot WAIT to get tickets for U.P. – I missed the first round, but I’m determined to get there eventually!