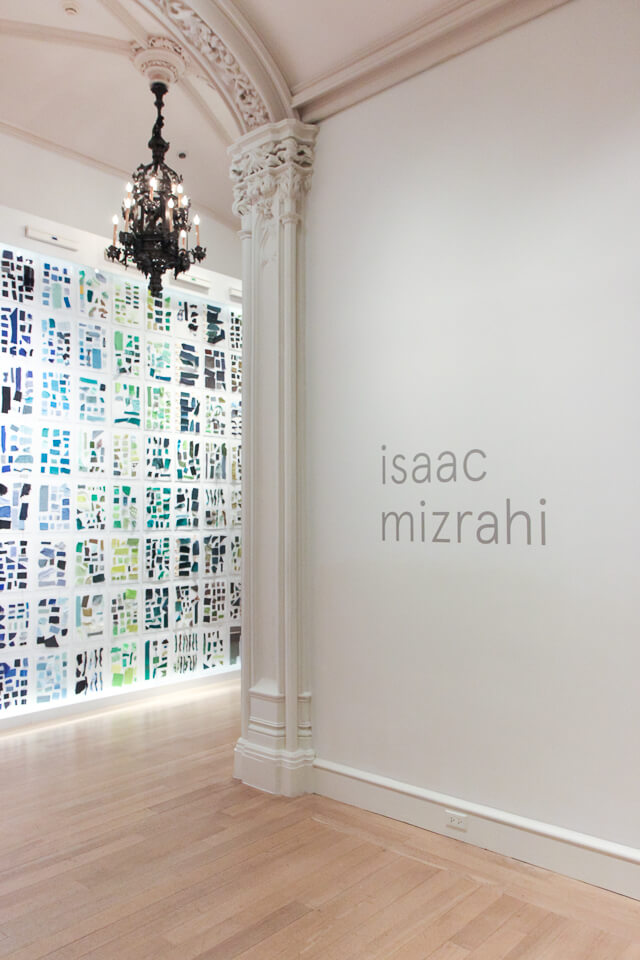 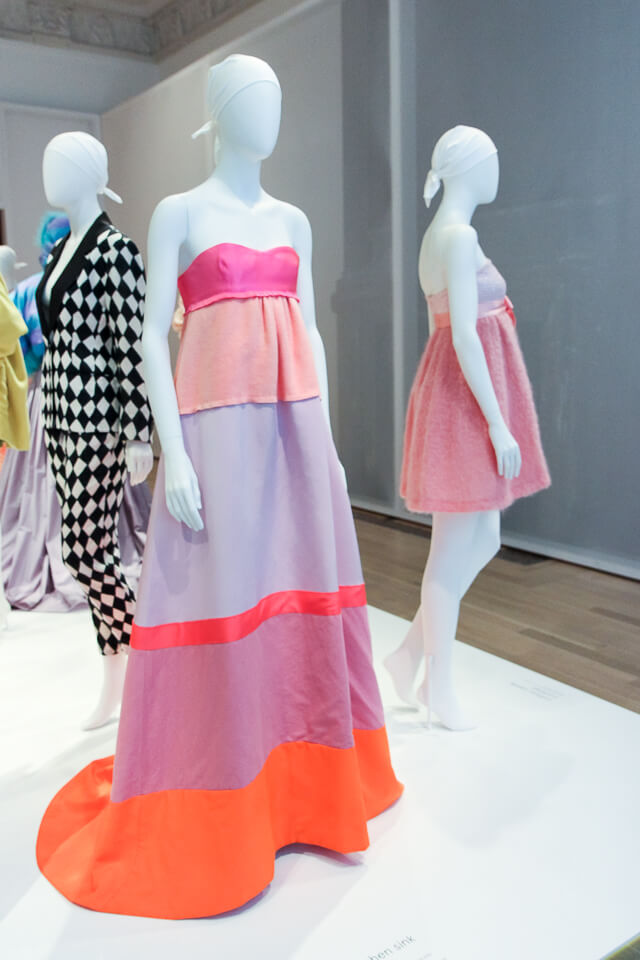 While my Mom was staying with me a few weeks back we visited the Isaac Mizrahi exhibit at The Jewish Museum, and we were both shocked by how much we enjoyed it. Not knowing much about the designer, my expectations weren’t super high, but it turned out to be such an engaging exhibition. Unique features like a wall of fabric swatches, Isaac’s fashion sketches (amazing), and of course lots of his colorful and inventive designs made it a really unique and original experience. At the end there was an interesting video that showed clips from some of his runway shows and other career highlights (he’s done a lot more than I realized). Read on to see more from this bright, colorful, and fun exhibition! 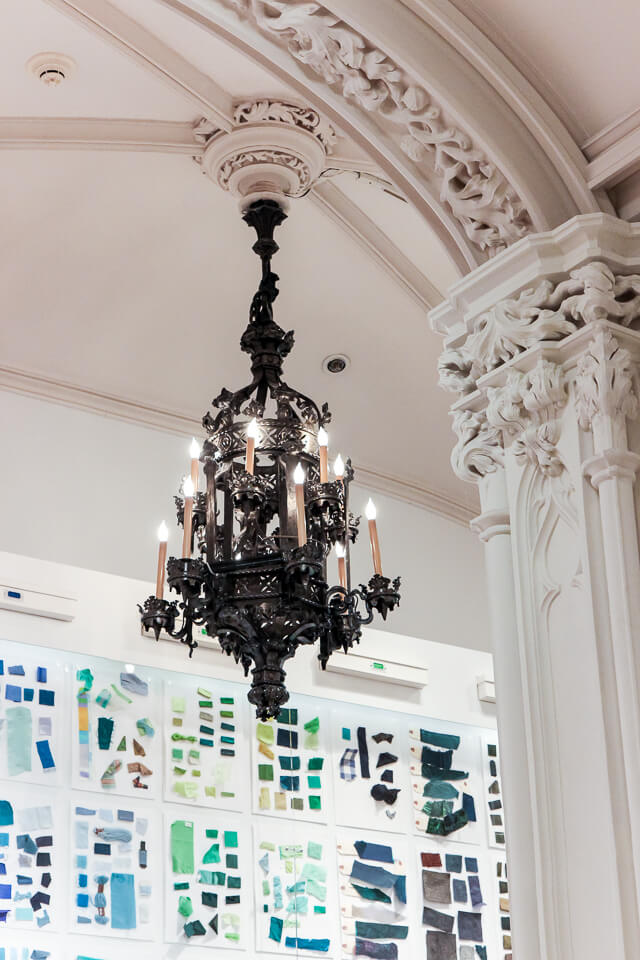 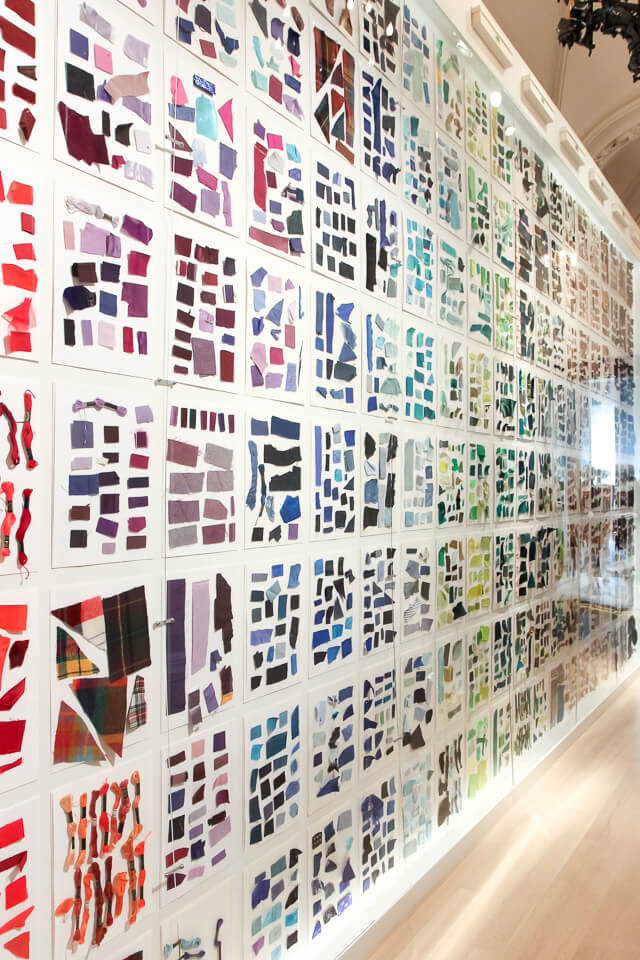 One of our favorite parts was this wall of fabric swatches that Isaac has collected over the years as part of his creative process. This is only a small fraction of his color archive! They’re all different textiles, and together they create this beautiful mosaic. Isaac said he sees himself as a kind of keeper of colors, which is why he tends to collect them. He also said “there are no ugly colors, just ugly people.” Ha! 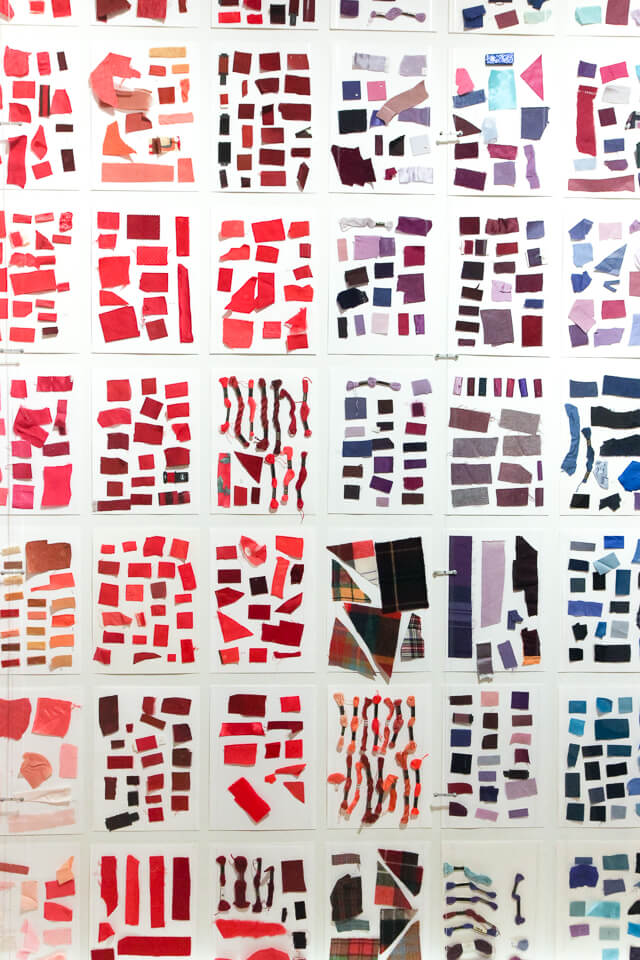 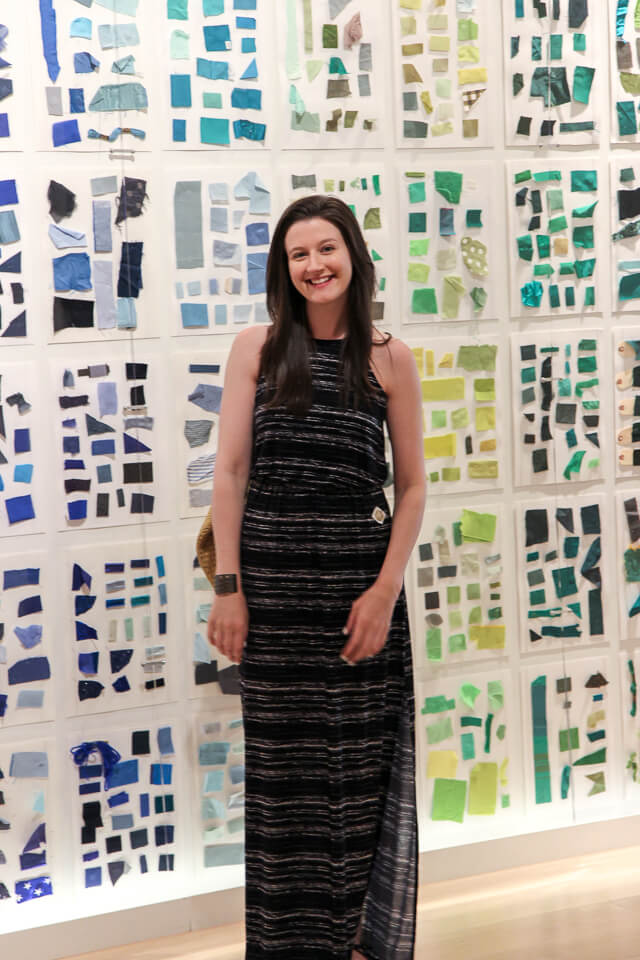 Had to pose in front of this…I mean, what could be a better backdrop? 🙂 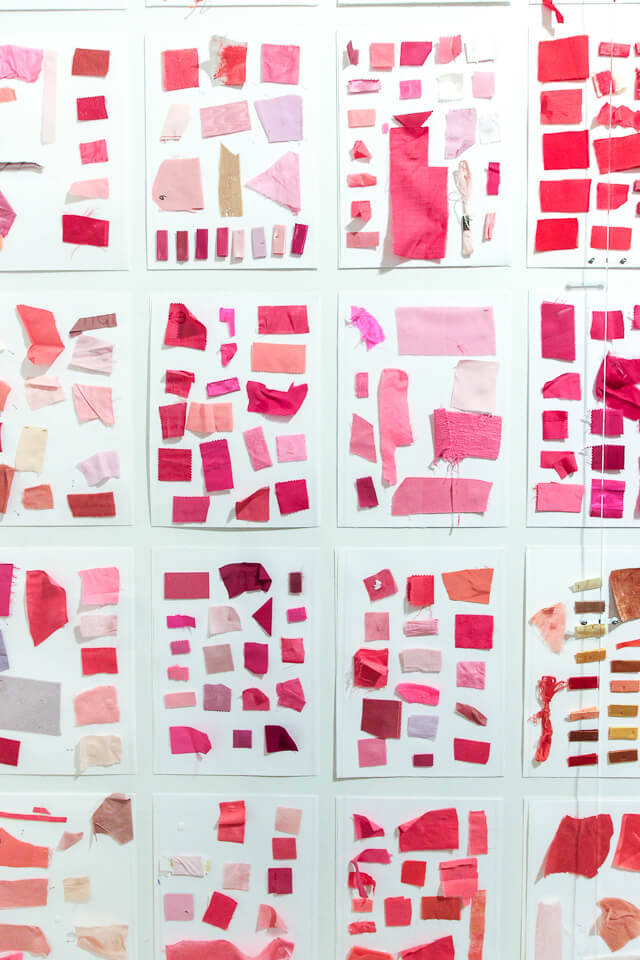 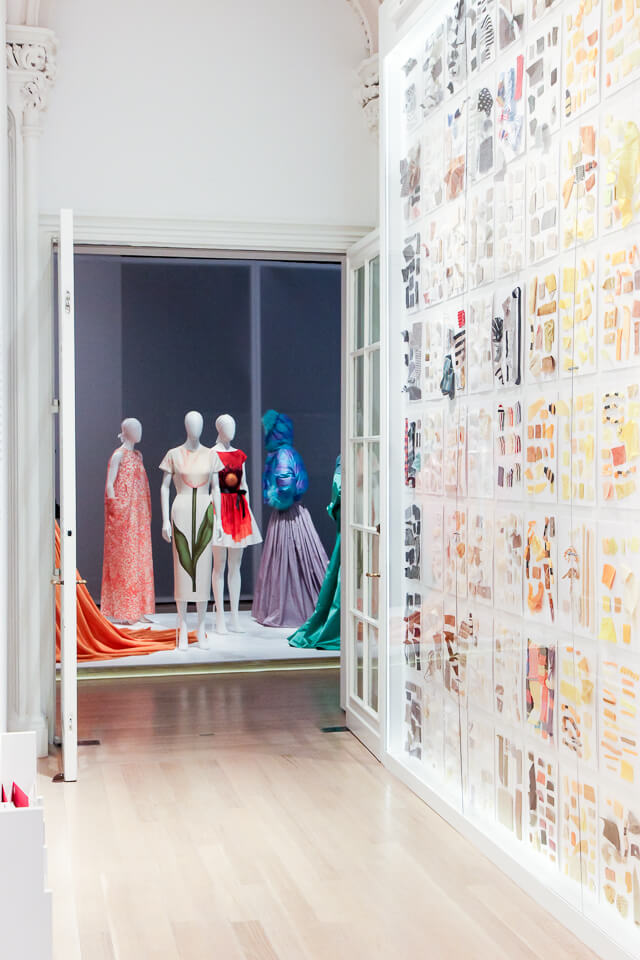 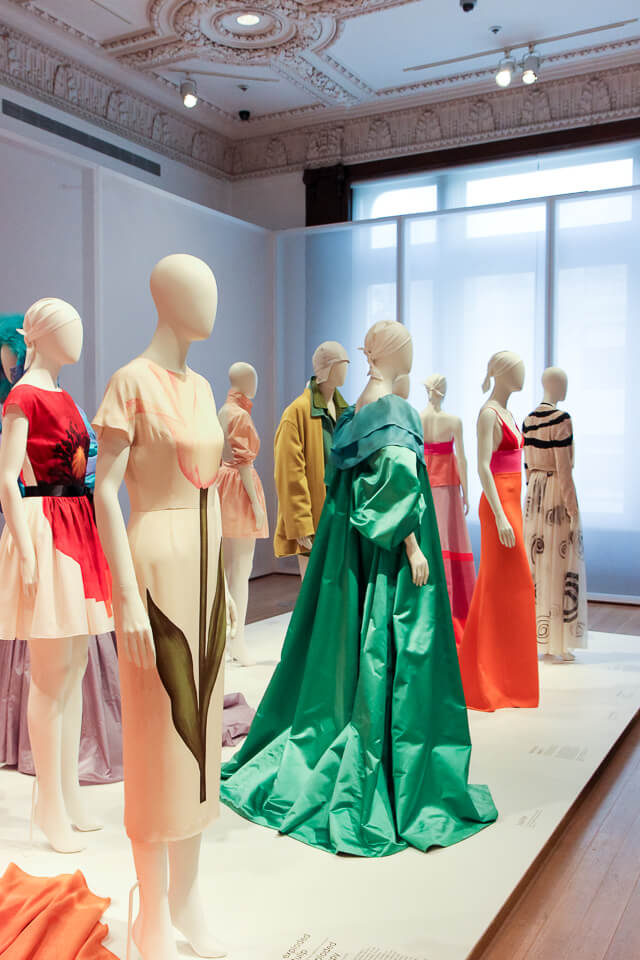 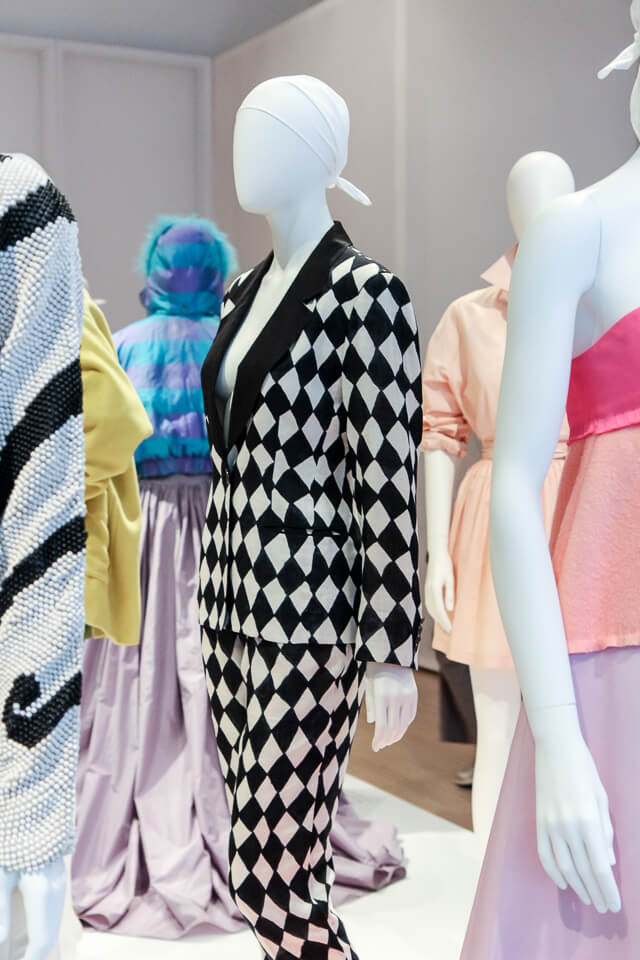 I love the vibrant colors and creative shapes and patterns that Isaac employs in his designs. Truth be told, before this exhibition when I thought Isaac Mizrahi, all I thought of was Target…I just didn’t realize he had such a long and successful career doing high-end fashion before delving into affordable fashion. His first collection actually debuted at Bergdorf Goodman in 1986, and he was twice named the CFDA’s Womenswear Designer of the Year. When his fashion house closed in 1998, he worked in set and costume design for Broadway, and later became the first designer to launch an affordable line with Target (a concept which has obviously blown up over the years). 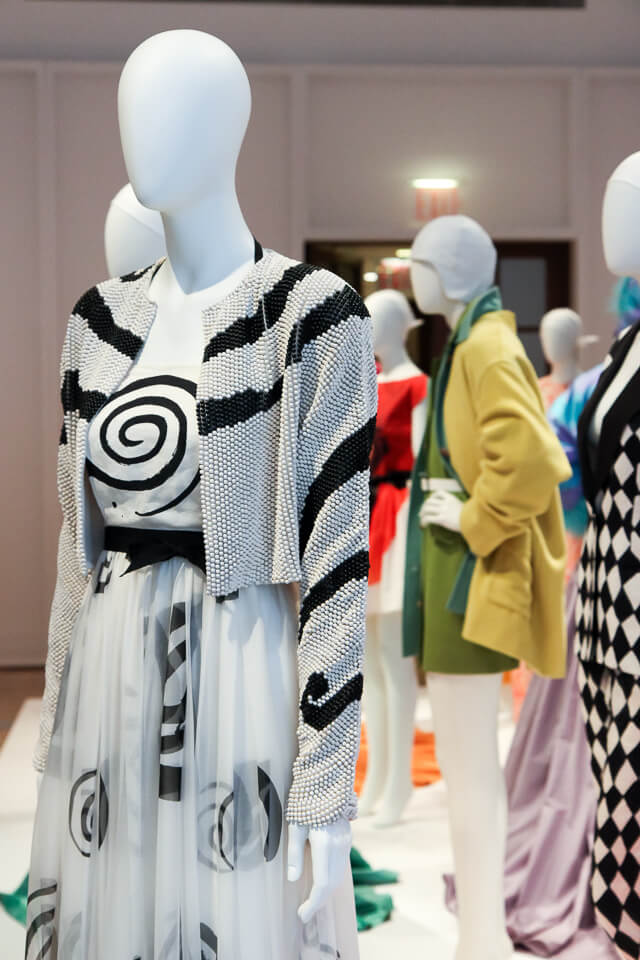 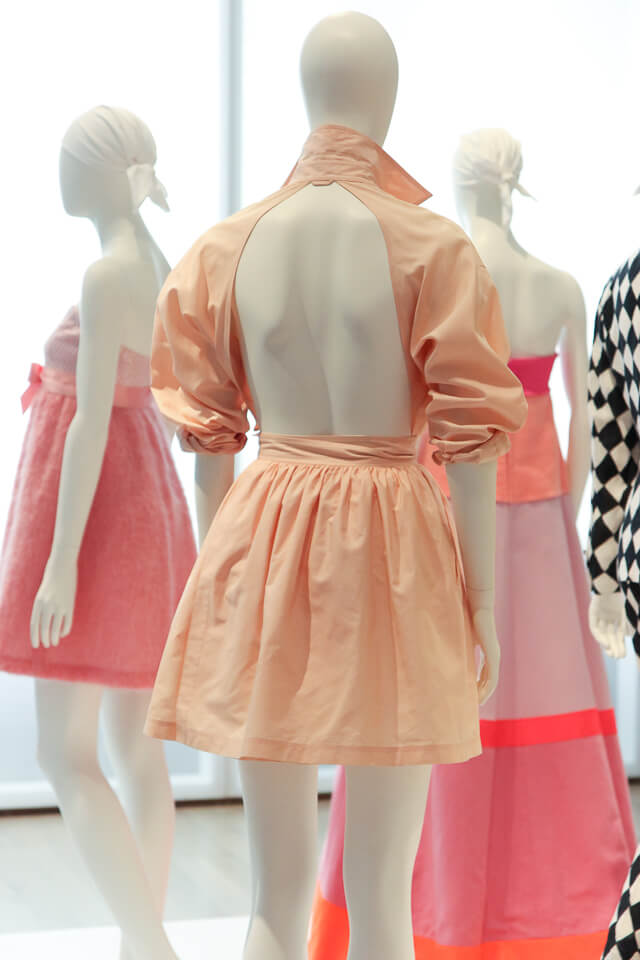 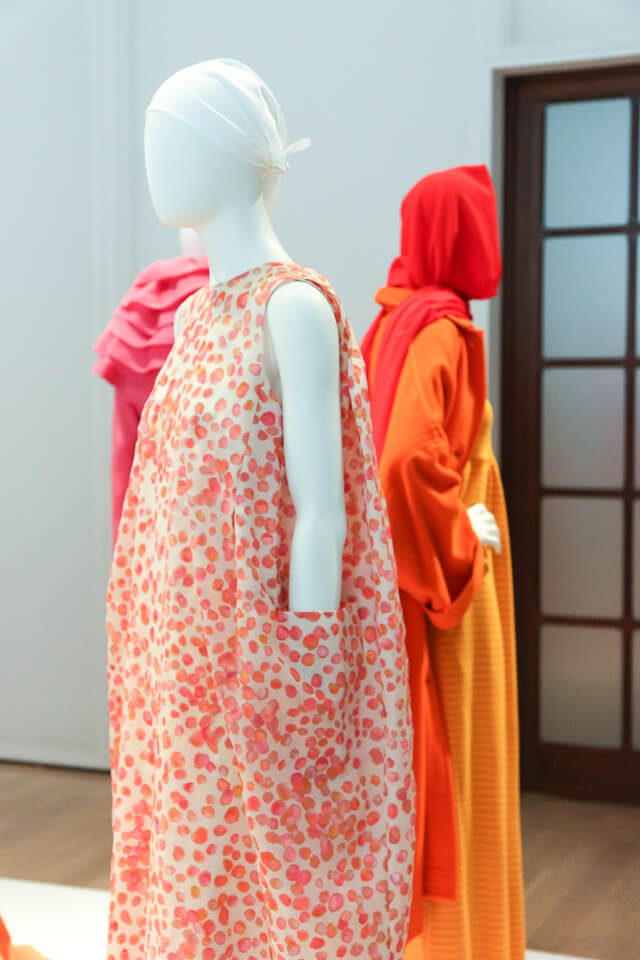 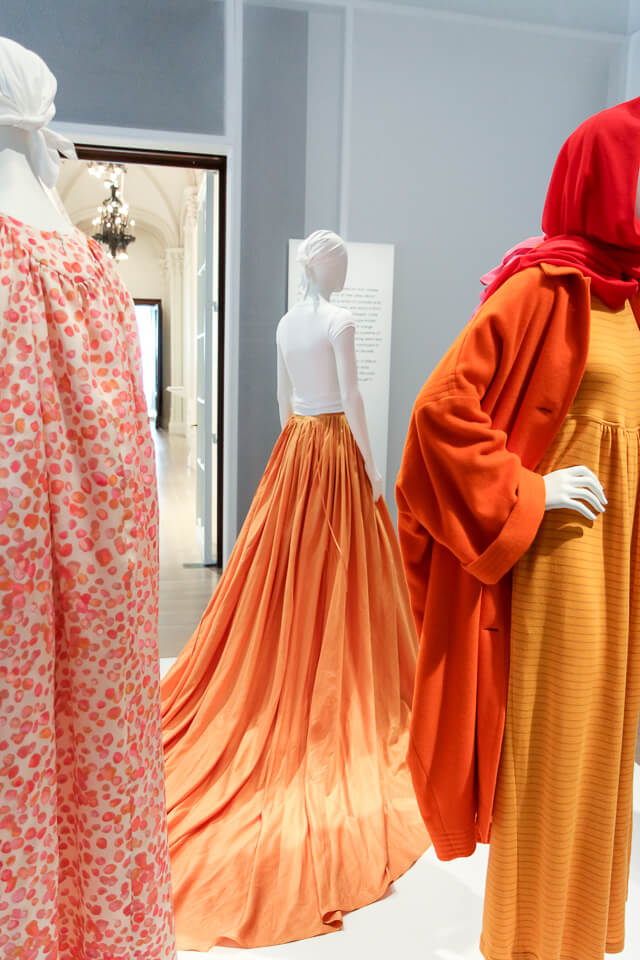 Isaac was the first to pair casual items, like this white tee, with ballgown-esque skirts (oh except for my Mom…she wore an outfit very similar to this to a wedding back in the day. Very fashion-forward!). 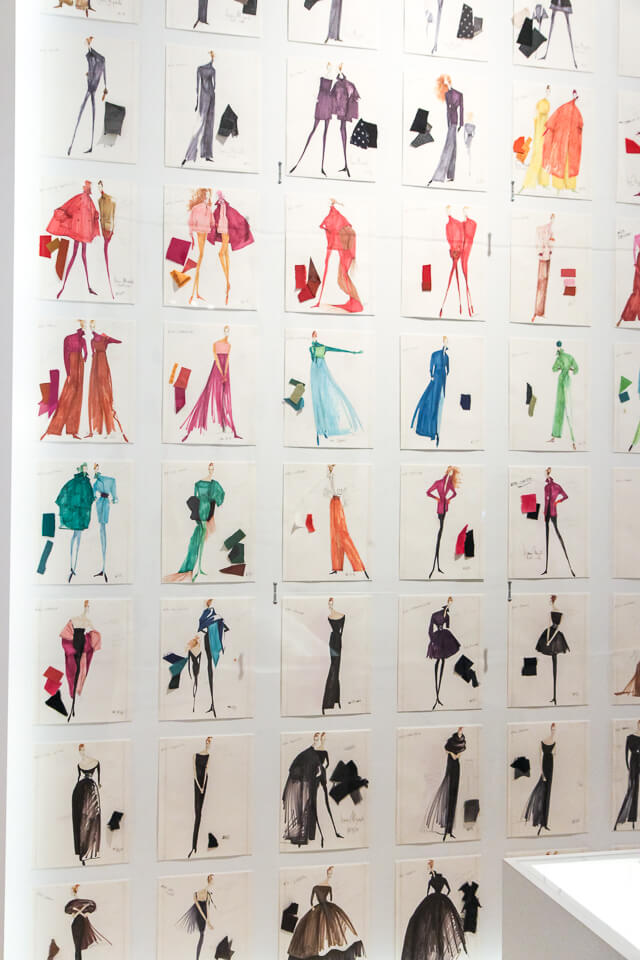 Another major highlight of the exhibit – Isaac’s fashion sketches. Aren’t they amazing?? I LOVE fashion illustrations and design sketches so these just thrilled me. 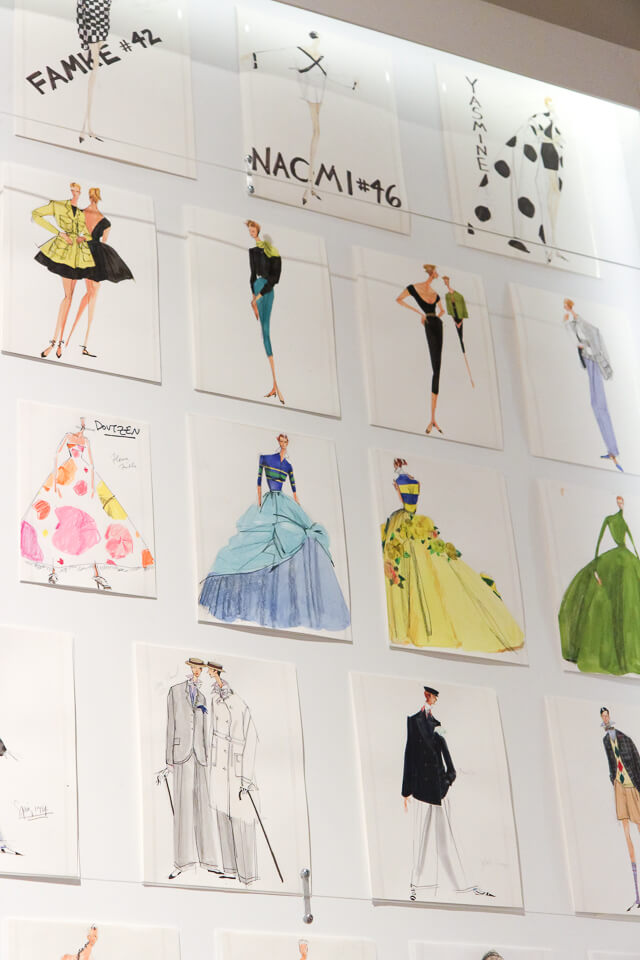 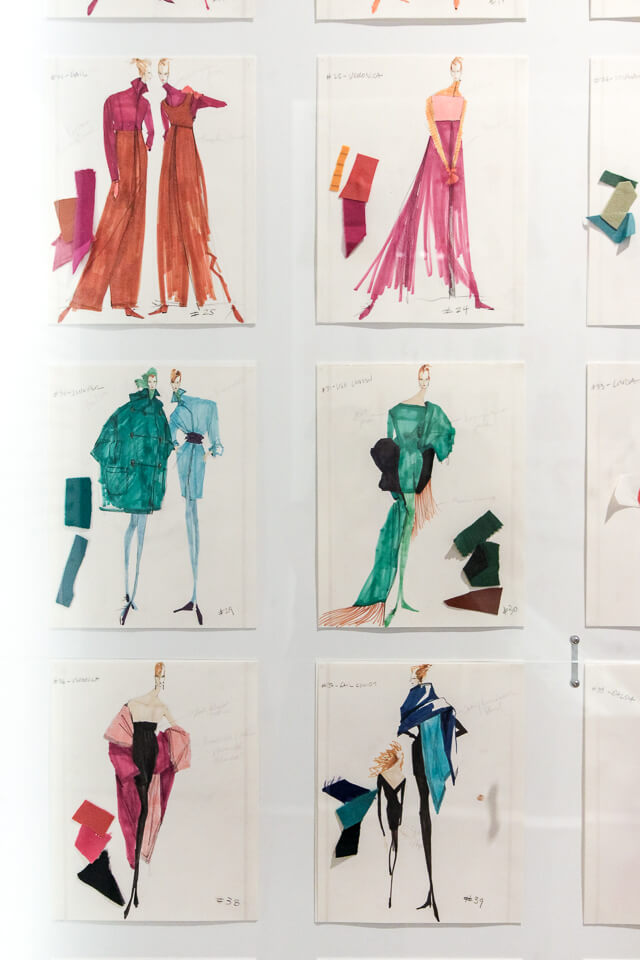 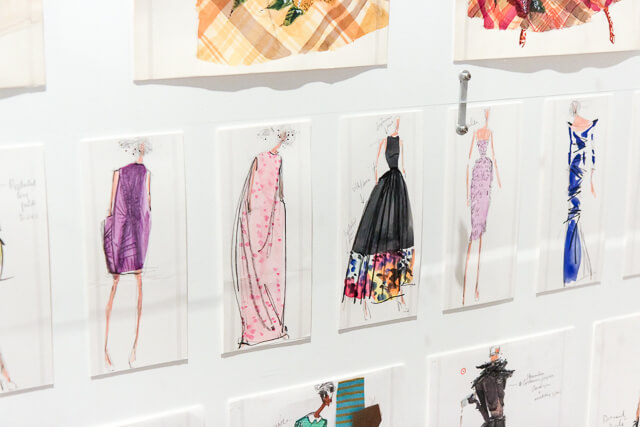 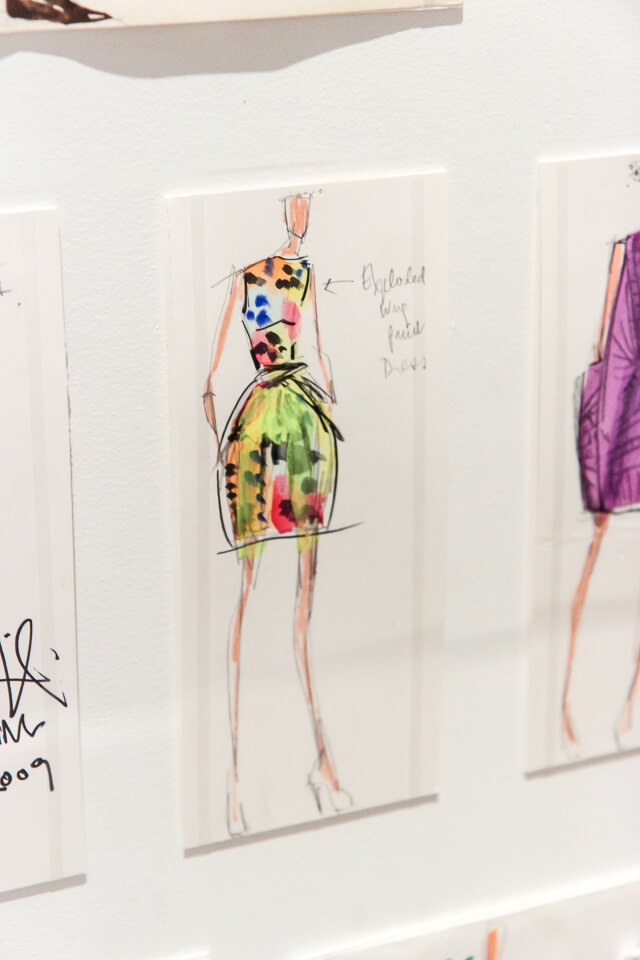 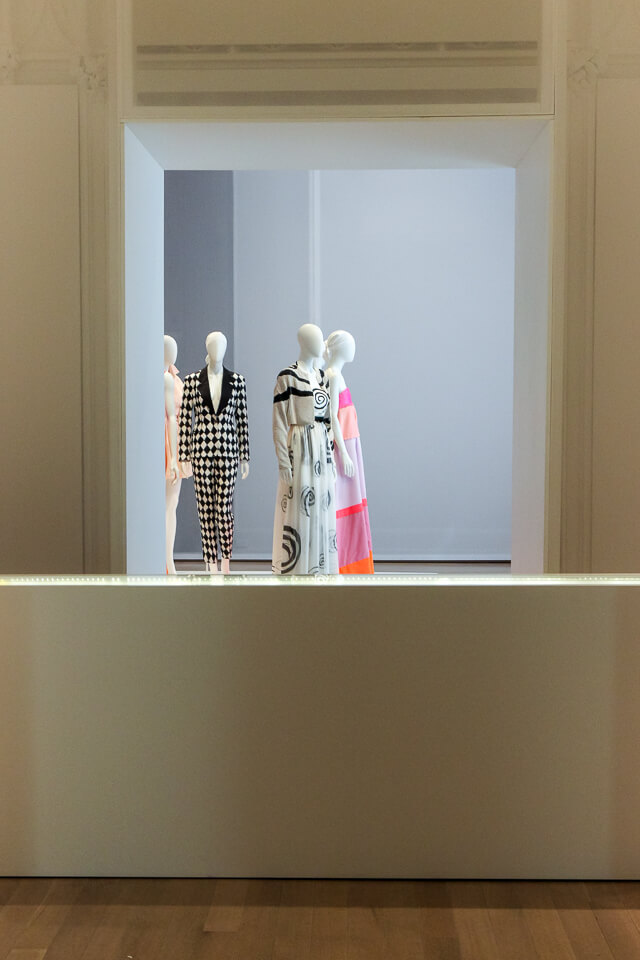 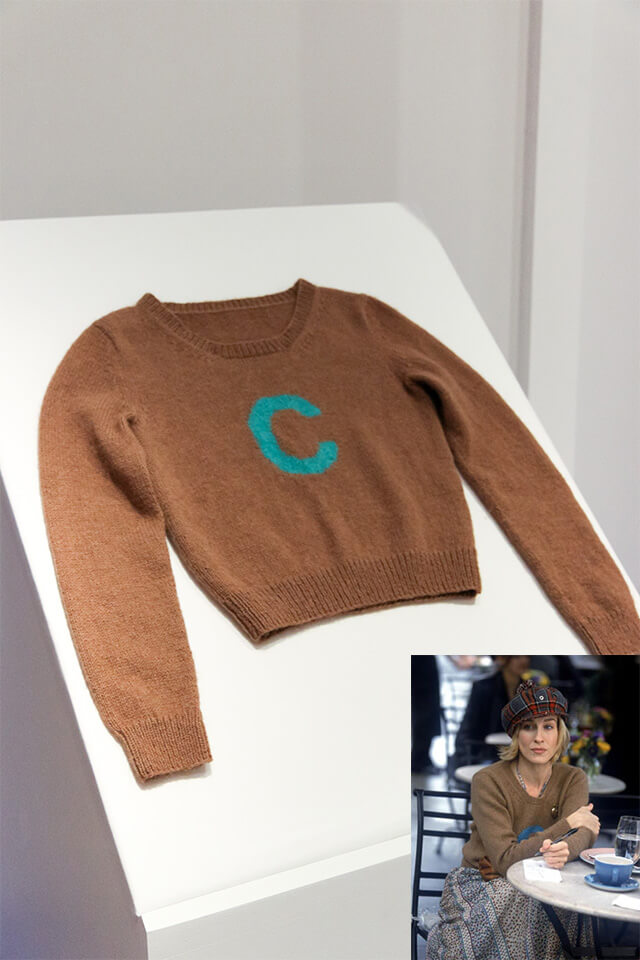 Carrie’s sweater! Remember that episode? And remember the episode that Isaac himself had a cameo in? (Ok so maybe I know like, every episode by heart…). 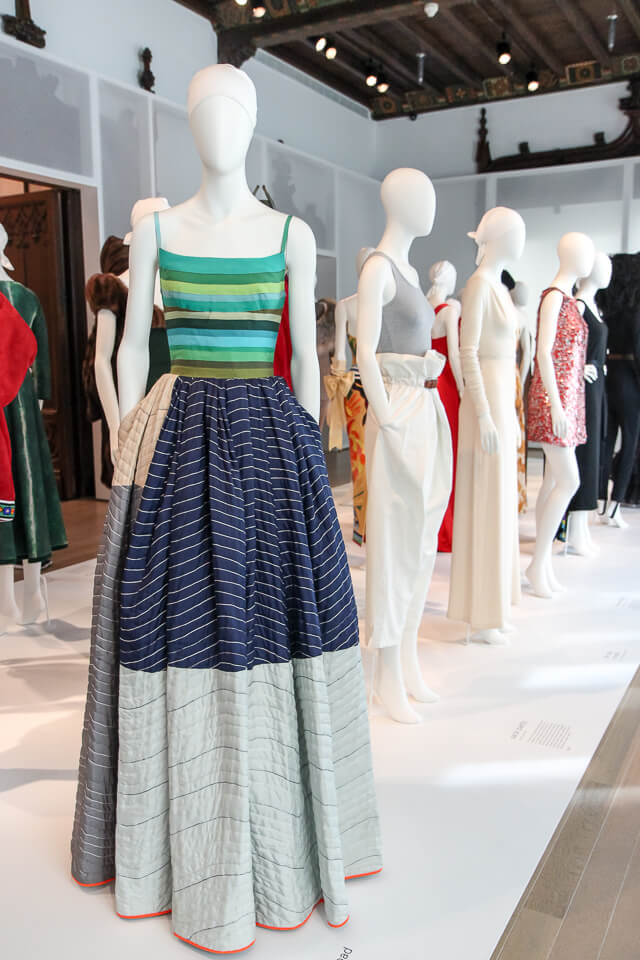 Isaac has a thing for elevator pads, which is what this skirt is made of…the bodice is grosgrain ribbon. 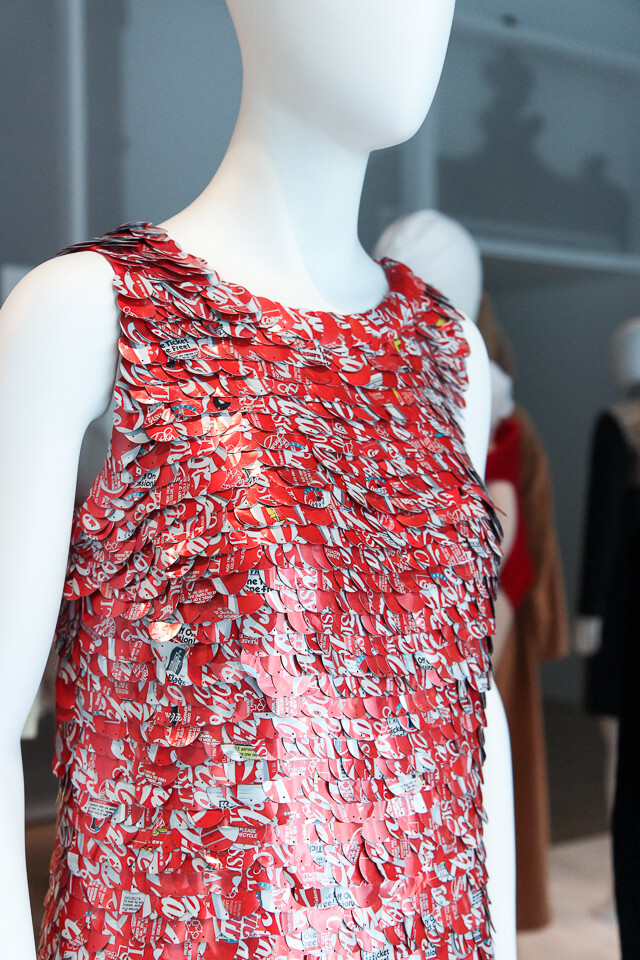 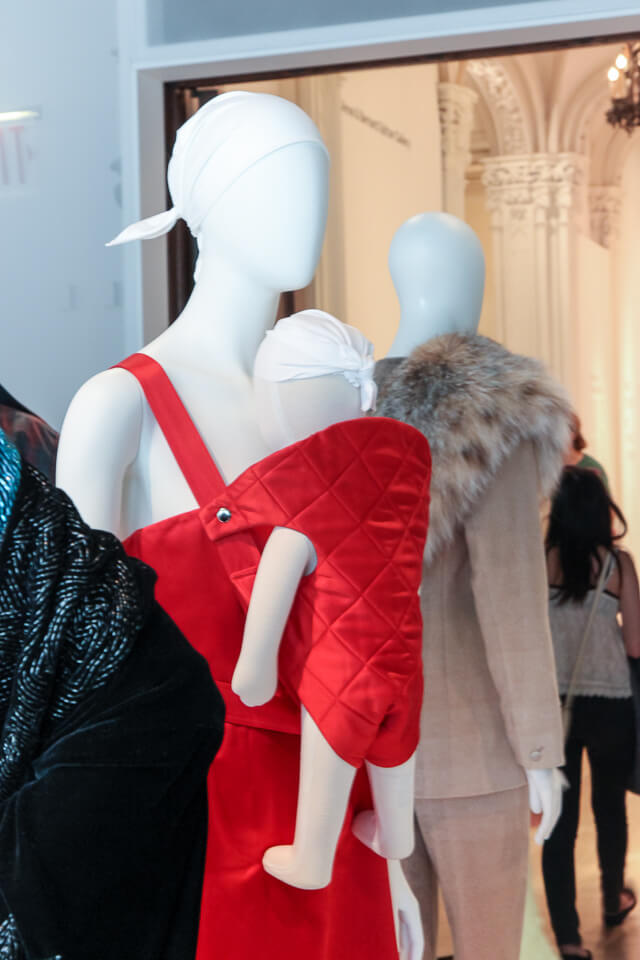 Gisele wore this down the runway, before she had babies of her own…in fact, she still looked like a baby herself at the time! 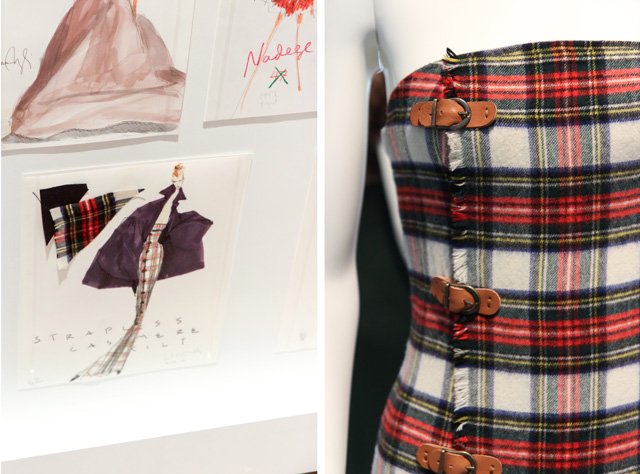 From sketch to reality. 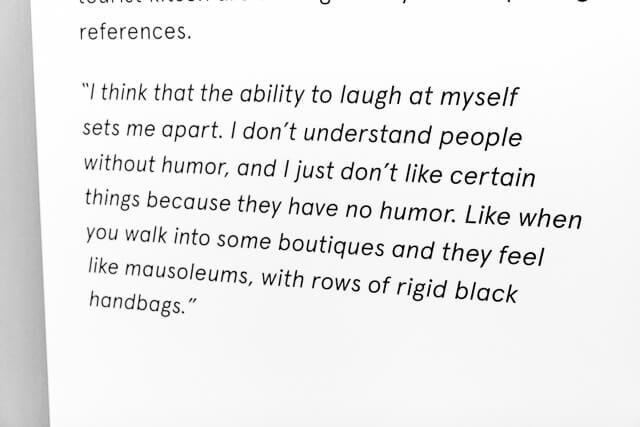 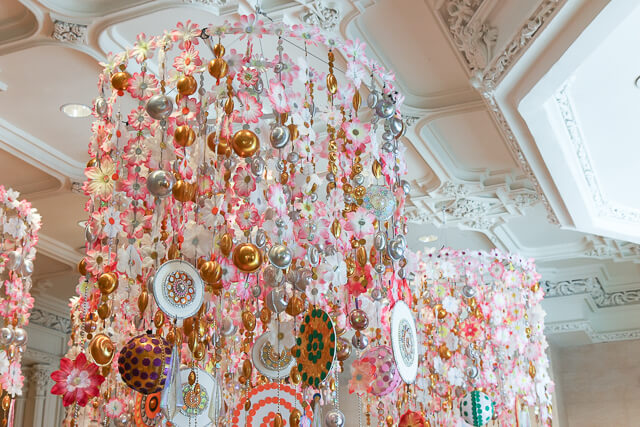 This installation in the museum lobby wasn’t part of the Isaac Mizrahi exhibit, but it was too pretty not to include. It’s called Using Walls, Floors, and Ceilings: Beatriz Milhazes, and it will be on view through September 18th. It’s actually part of an ongoing exhibition at The Jewish Museum, where they invite different artists to create installations in the lobby. 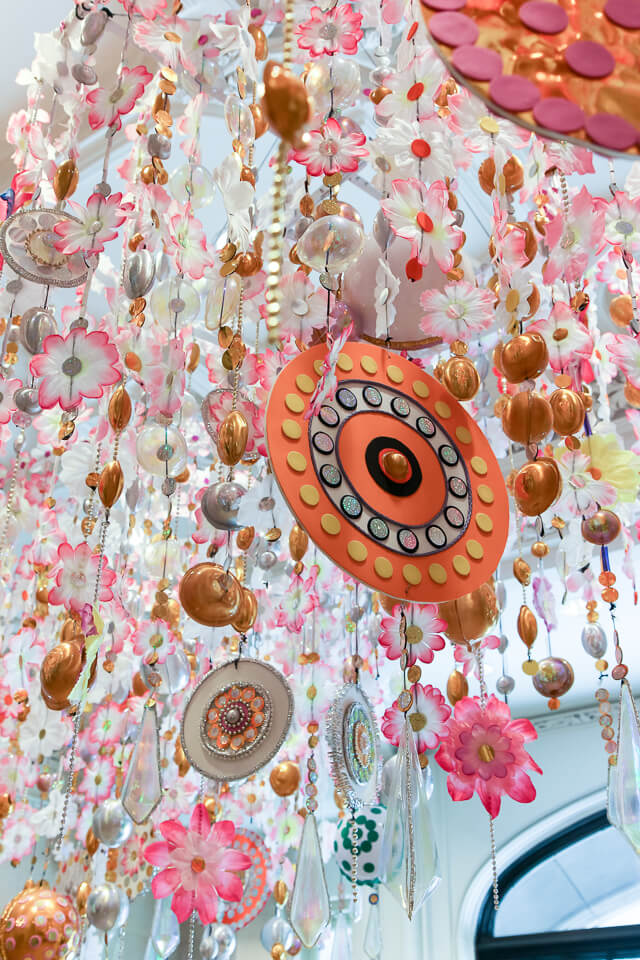 This was such a great exhibition – well-designed, well-curated, not too big and not too small. This was my first time visiting The Jewish Museum and I was thoroughly impressed. Highly recommend catching the Isaac Mizrahi exhibit before it closes in August!