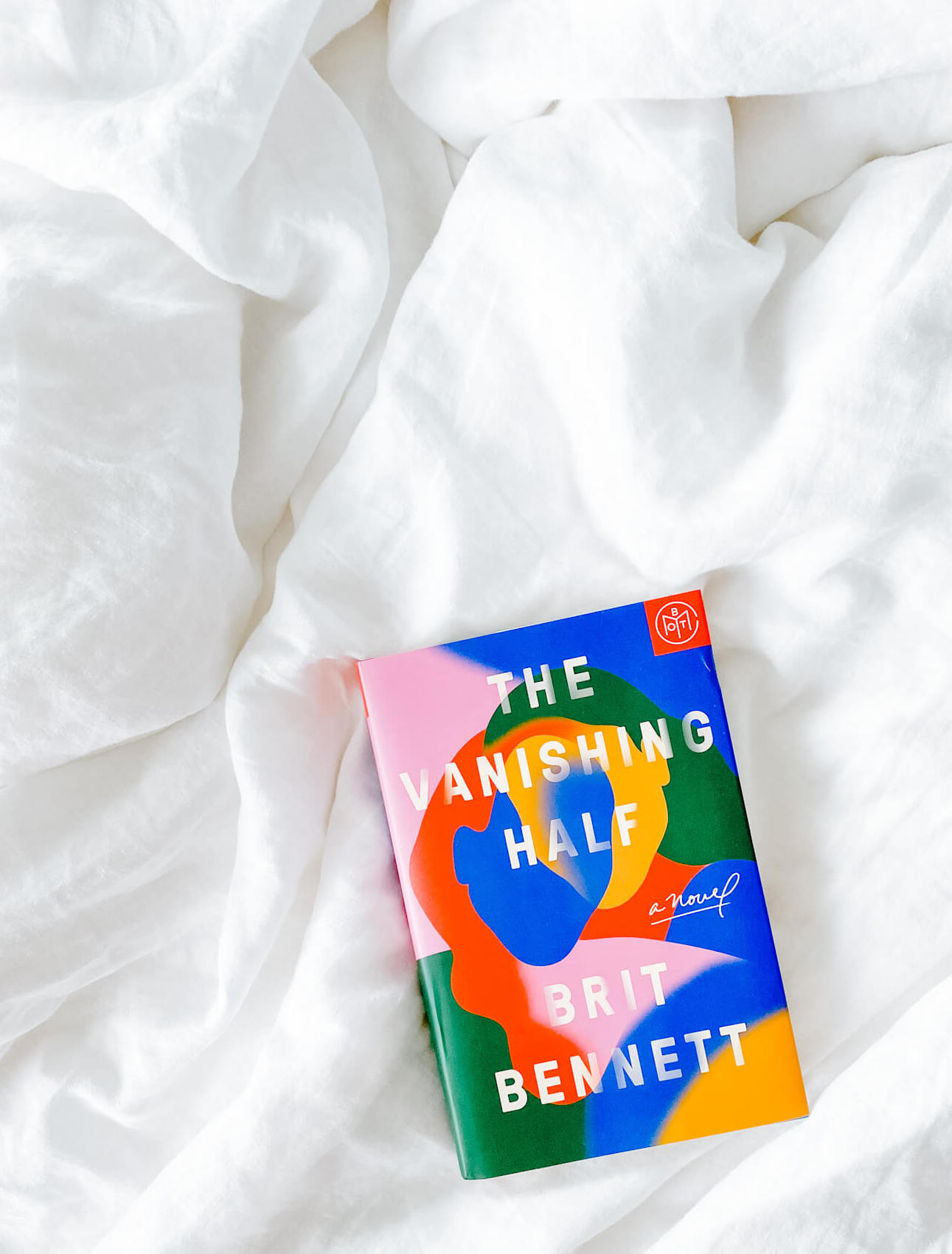 I read 11 books in June, which I was surprised to realize because I felt like I was really falling behind! I had a good month of reading…a few four and five star books and only one or two that I really didn’t care for. As a reminder, I’ve linked all of the books here to bookshop.org, which shares profits with independent bookstores and is a great alternative to Amazon! You can keep up with what I’m reading on Goodreads and/or follow me over on my bookstagram. Onto the list!

The Vanishing Half: This was for sure the best of the month. I’d be surprised if anyone doesn’t know the synopsis by now (this book is allll over the place, rightfully so!), but it’s about a pair of Black twins from a very light-skinned community in the 1960’s South. They run away at sixteen and the book follows their lives as one marries the darkest man she can find and returns with a daughter, while the other passes for white and keeps the secret from her husband. It’s SO GOOD. Brit Bennett is a beautiful writer and it was an engrossing read that touched on a lot of thought-provoking themes. There were so many lines in there that I wanted to underline because they were just beautifully expressed and really struck a chord.

Pretty Things: I loved Janelle Brown’s book Watch Me Disappear so I was excited for this one, which revolves around a con woman and the heiress she’s looking to scam. While I think Janelle is a great writer and I did enjoy the book, I thought it could have been about 100 pages shorter. It was a good premise but I found myself feeling like it dragged a bit – I think only because it was almost 500 pages long so I got a little bored. I have no problem with long books but only if they need to be! If this was more tightly plotted and moved at a much swifter pace, I would have liked it a lot more.

Fantasticland: This was one of my very favorites of the month – so good! Fantasticland is about a Disney-esque amusement park that gets hit by a massive hurricane. In the aftermath, hundreds of employees are stranded and it devolves into a Lord of the Flies type situation. One thing I really enjoyed was the structure of the novel -it’s told as a series of interviews to a journalist who’s writing a book about the event, so you get to hear about it from all of these different people who were involved. So there are tons of characters and they’re all kind of situated in different areas of the park, and sometimes their paths cross – it was just a perfect way for the book to be structured I think. Overall just immensely entertaining! Also as a warning, it’s pretty gory and violent so reader beware.

Normal People: I read Normal People for book club and we had a great discussion about it. For such a short novel, there turned out to be a lot to say about it. I actually watched the show on Hulu first (loved it), so it was interesting to compare and contrast. The script was written by Sally Rooney so it really hews closely to the source material. I think the book cleared up some issues I had with the show, and overall I really liked both. For anyone who doesn’t know, Normal People focuses on an Irish couple from high school through college and just follows the ups and downs of their relationship. Rooney is somehow able to take a sort of ordinary story and really elevate it into something that feels profound and at times heartbreaking. There were so many parts to the characters and the story that felt incredibly relatable, which I think is part of why people connect with the story so much.

The Turn of the Key: I really really liked this one! It’s about a nanny who goes to live with a family in this old, creepy mansion, and weird things start happening. The kids are a little off, there’s a mysterious locked garden, strange sounds in the night…that’s a setup that I’m pretty much guaranteed to love. I thought it was pretty atmospheric and actually did the whole maybe-haunted house thing well (UNLIKE Lock Every Door by Riley Sager which I think is highly overrated and wasn’t remotely scary or atmospheric). I like Ruth Ware, her books are solid 3.5-4 stars for me and this is now one of my favorite of hers.

The Lying Game: I went for another Ruth Ware and this one was pretty good. It’s about a group of school friends who gather together as adults when a human bone is found washed up in the river where one of them lives. Clearly they all had something to do with this human bone and the story unfolds around that. It was good…just didn’t grab me as much as the previous one because it lacked that creepy factor. But I always like things about boarding school friends – even though this focused more on their adult lives, I still enjoyed it!

The Scholar: This is my second Dervla McTiernan – I really enjoyed The Ruin so I went for the second in the series. I liked it! It follows the same detective Cormac Reilly from the first novel, and centers around a hit and run near a college campus. It was a good mystery but I actually guessed one aspect of it (that almost never happens), so maybe a tiny bit predictable? I’ll read the next one in the series for sure though.

The Talented Miss Farwell: Worst of the month. I feel bad saying that but I prefer honest reviews and I have strong opinions that I clearly cannot keep to myself, hah. This is about a girl who grows up poor and as an adult starts siphoning money from her local government job to start a side career/life of crime as an art dealer. Ostensibly with a plot like that it should have been high tension and high stakes, but it just never was…it was kind of boring. She wasn’t an interesting enough character and it was just so lackluster. It felt like nothing happened. She stole money, bought art, sold it. Rinse, repeat. I wanted it to be more of a Talented Mr. Ripley type drama and sadly it was not.

My Sister the Serial Killer: SO GOOD! SOOOO good. The more I think about this book the more I liked it. This is about two sisters in modern day Nigeria – the outgoing (and possibly sociopathic) Ayoola, and the more reserved Korede. In the beginning of the book, Ayoola calls Korede for help – she’s killed her boyfriend and needs help hiding the body. It was self-defense, of course!….only this isn’t the first time. And when Ayoola sets her sights on a handsome doctor Korede works with and just happens to be in love with, Korede has to decide how much she’s willing to sacrifice to protect her sister. This book was short, to the point, and not a word was wasted, which I really appreciate. It moved along at a clip and yet it didn’t feel shallow – I felt like I got to know the characters and their situation and there were even amusing side characters. To do that in such a short novel is pretty dang impressive! Plus the premise is just so good. I read a LOT of thrillers and this was WAY better than most of the ones that get tons of hype (cough, Riley Sager, cough).

The Chiffon Trenches: This is Andre Leon Talley’s memoir of his life in fashion, from interning with Diane Vreeland while she curated one of the first Met Costume Exhibitions, to working with Andy Warhol at Interview, living in Paris while at Women’s Wear Daily, and eventually landing at Vogue where he became creative director and Anna Wintour’s right hand man. He was friends with every designer and became especially close with Karl Lagerfeld, and he shares the ups and downs of it all. I really appreciated how honest he was about his own personal issues – his struggle with his weight, the difficulties of his childhood in the Jim Crow South, and the challenges of being a black man in the world of fashion publishing. He’s seriously smart (he has a Masters degree in French literature), and obviously extraordinarily well-versed in fashion. His passion for every aspect of it propels his life and made for a really interesting story. I listened to it on audio and it was great to hear him read it himself!

All Adults Here: This is the third Emma Straub I’ve read and I liked this one more than Modern Lovers but less than The Vacationers. It’s basically about a family – the grandmother, Astrid Strick, witnesses a freak accident and the book takes off from there. It really gives equal time to pretty much all members of the family – Astrid’s two adult sons and their kids and her adult daughter. There were a lot of characters and it’s a credit to Straub’s writing that they all really did come to life as individuals; I can’t imagine how hard it must be to have so many characters and give them all a voice and a point of view. The book hit on a lot of topics, some lighter and some more weighty, but to me it didn’t come off preachy. I would’ve preferred if it focused more on the adult kids and less on their kids, but that’s just me. I think anyone who enjoys literary family dramas will enjoy this one!