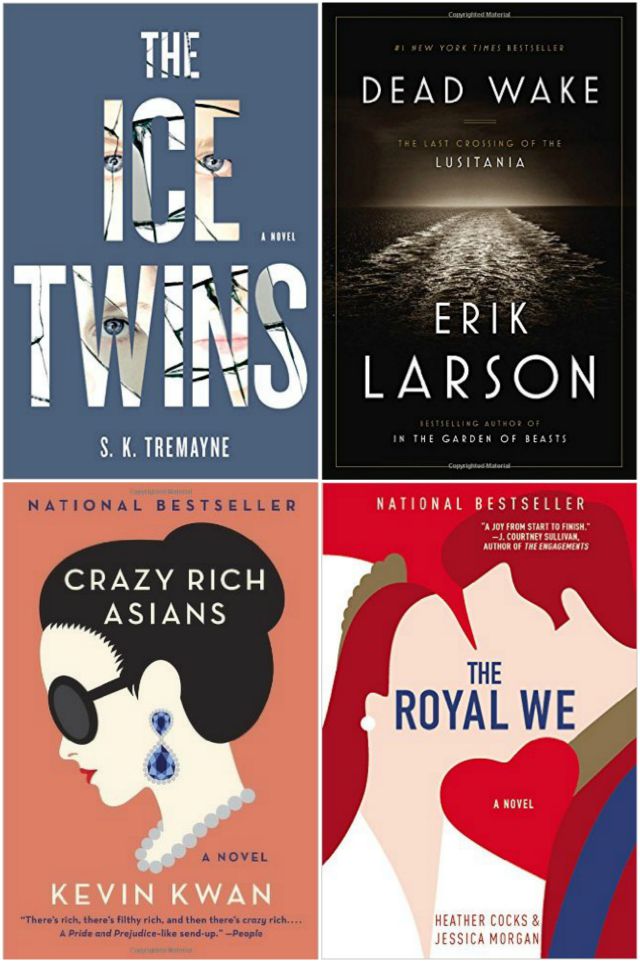 The Ice Twins (S.K. Tremayne): I loved this psychological thriller, with its intriguing premise, complicated characters, and twisting, turning plot line that continually kept me guessing. Set on a desolate, remote island in Scotland, the book centers on a married couple who have recently lost one of their identical twin daughters in a tragic accident (not a spoiler, you find out right away). That eerie feeling starts to creep in when the living twin (Kirsti) claims to actually be Lydia (her dead twin) – and her parents aren’t sure if she’s lying, acting out, or if they’ve made a horrible mistake. I loved the writing and the atmospheric setting, so I definitely recommend this one.

Dead Wake (Erik Larson): Loved this book as well- no one writes non-fiction like Erik Larson! His books always manage to turn what could definitely be boring and dry into an adventure that reads like a fast-paced, character-drivin novel. This one focuses on World War I and the Lusitania, and I feel like I learned so many interesting facts from it, about the war and America’s involvement in it, about submarines…things I did not think I would be super interested in learning about! The book focuses on real people who were aboard the Lusitania on its fateful voyage from New York, and by honing in on these characters, Larson really brings the past to life. Instead of feeling like some far off event in history you could never relate to, his writing makes the reader feel engaged and connected to the story, while highlighting the fact that simple choices made by individuals are really what drive these huge events in history.

Crazy Rich Asians (Kevin Kwan): I liked this book while I was reading it, but upon further reflection I decided that it was lacking a bit. It was entertaining and I liked the premise, but ultimately the plot and character development felt really thin. This book centers on a Chinese-American girl who is going to Singapore with her boyfriend of two years to meet his family – unbeknownst to her, one of the richest families in all of Asia. First of all, it really stretches plausibility to lay the whole premise on the audience believing that you could date someone for two years and know NOTHING of their upbringing, family, childhood, etc. I think not. More than that, though, the characters just weren’t developed, and the relationship between the main characters just felt like a big nothing. The main guy was such a nothing I can’t even remember his name – the author just didn’t bring him to life, endear him to the audience, anything. Overall it wasn’t bad but definitely a beach read, I’d say.

The Royal We (Heather Cocks and Jessica Morgan): I read this book because the premise was sort of similar to Crazy Rich Asians (regular girl falls for extraordinary guy), but I was hoping it would have what that book was lacking – and it did! The characters were well-developed, the relationship felt real, and you kind of felt like you went on a journey with these characters. For anyone who doesn’t know, the book is about an American college student (Bex), who goes to Oxford to study abroad and finds herself thrust into the world of the British royalty when she falls in love with Prince Nicholas, future King of England. Sound familiar? Yeah, it’s basically Kate Middleton/Prince William fan fiction, except if Kate Middleton were American – but at the same time, the authors made the characters their own, not caricatures. I really enjoyed it, and if you’re interested definitely listen to this Jess Lively podcast where she interviews the authors – it’s really interesting to hear about their process in writing a book together. 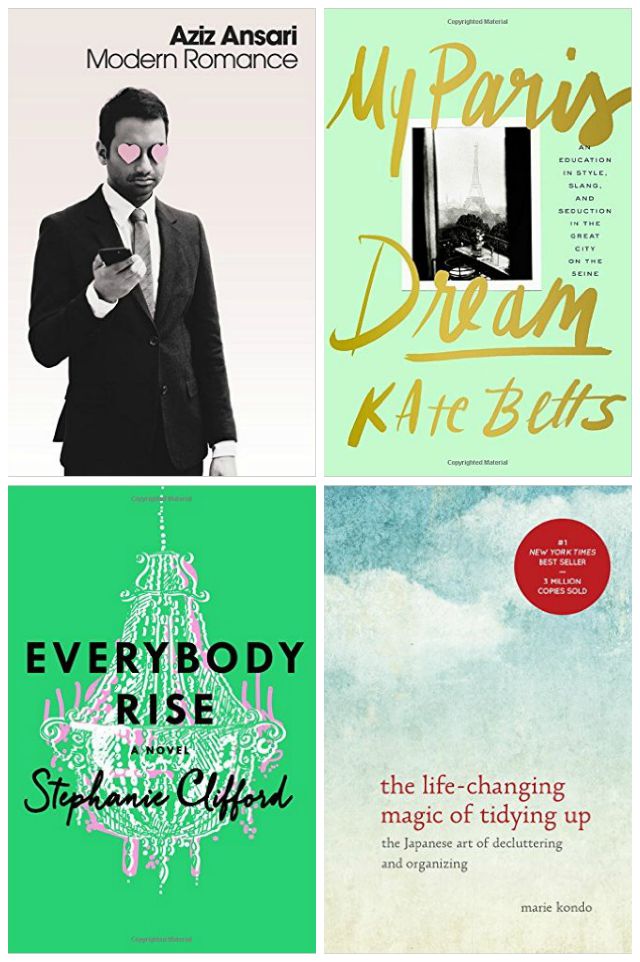 Modern Romance (Aziz Ansari): Loved. This. Book. It was so good and really surpassed my expectations. Comedian Aziz Ansari partnered up with sociologist Eric Klinenberg to research dating and marriage both in older generations and young people today. Along the way they conducted hundreds of interviews, traveled far and wide to get the scoop from daters in other countries, and analyzed statistics from websites like OkCupid and Match.com in order to gain a well-rounded perspective on romance and dating in our modern, swipe-app driven world. What emerges is an entertaining, but also in-depth and enlightening read that compares and contrasts dating in the past and present and opens your eyes to the actual humans behind the screens on these (sometimes) ridiculous apps and dating sites. I think anyone from teenagers to older folks will enjoy and be able to relate to this book in some way. Modern Romance wasn’t just a comedian book at all – Aziz actually had a lot of really interesting and thought-provoking ideas and insights to share. And if you don’t think he’s funny or aren’t familiar with his comedy, just watch this and this (not at work!).

My Paris Dream (Kate Betts): A must read for anyone who dreams of moving to Paris. In this memoir, former editor-in-chief of Harpers Bazaar, Kate Betts, recounts her adventures doing exactly that. I liked that she didn’t romanticize her time in Paris, but shared the struggles and uncertainties as well as the magical moments that make living in Paris the dream of so many. It kind of reminded me of New York – movies and books idealize the hell out of it, but actually it’s a place, and it has its good and bad parts. But no matter how bad the bad, there’s still that magic and beauty to it that keeps some people wanting to be there, and nowhere else (even if not forever). Anyway, if you’re a fashion lover (or even just marginally interested in that world) and want to read about someone who worked her way into top spots at Harpers Bazaar, Vogue, and Time Magazine with grace, talent, and integrity, I think you’ll enjoy this!

Everybody Rise (Stephanie Clifford): See my review of this book here!

The Life-Changing Magic of Tidying Up (Marie Kondo): I finally got around to reading this – it’s a quick one which you can skim through in a day. Of course, being the decluttering, organizing, throwing-away-unused-items fan that I am, I liked the ideas behind this book. However, she kind of lost me when she was talking about storage ideas – like when she suggested keeping your books in your closet. Um, no. Just no. By the time she got around to suggesting that you dry off your shampoo and conditioner bottles and remove them from the shower after each use, thus leaving nothing behind in that damp, mildew-breeding environment, I felt like she had kind of lost the plot. I mean, come on. That’s just not realistic. So yes, I liked a lot of the ideas and I think it’s great when it comes to decluttering motivation, but I’m really not into living in a minimalist space where you don’t even have a bookshelf! Overall though, good motivation for getting rid of stuff you don’t love or need.