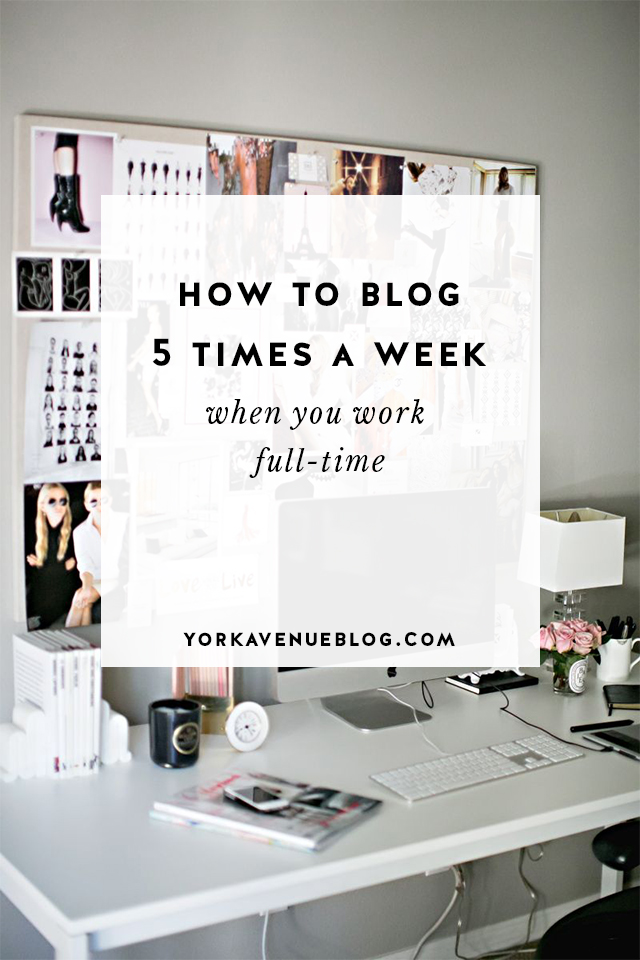 One of my awesome readers (hi Krystal!) mentioned that she was curious to hear a little bit about how I manage to blog five days a week while working full-time, and I am more than happy to oblige as I love to talk “shop.” I say “manage” to post five days a week because it is not the easiest thing ever, and it does require a lot of time, some late nights, and some sacrifices, but, it is totally doable! I want to share a few strategies and most importantly, mental shifts that have been helping me lately.

I think a lot of people might say that the key to posting five times a week is to be super organized and keep an editorial calendar. I tried an editorial calendar a while back and it wasn’t for me – I prefer to get ideas straight into a draft in WordPress so that instead of taking an extra step in adding it to the calendar, I’ve made progress toward completing the post by starting a draft (even it it’s literally just a title). So, whenever an idea strikes me, into my drafts it goes. This way I’m really never scrambling for ideas at the last minute, because I have a lot of drafts (more on that in a minute).

I don’t try to get too far ahead of myself, planning out entire months at a time, post-wise. In a way I feel like I like the blog to be a little more spontaneous, but I do have over 100 posts in my drafts folder. It’s good to have those as backups and I hope to eventually actually get to all of those posts, and sometimes do, but a lot of the time things just pop up that I want to blog about on the spot, and that always takes precedence. I don’t want to stick strictly to a calendar, but rather blog about what I’m most excited about in that moment. That said, it is always great to have the drafts there for those weeks when the inspiration well is running dry.

Scheduling a Week Out

So here’s the routine I’ve fallen into – I get all of my posts “queued up” on the weekends – meaning I start 3-5 posts. This could mean starting to edit photos and getting some of them into the post, starting on writing a post, creating a collage, etc. So by Sunday I’m happy if I have 3-5 skeletons of blog posts ready to go, and usually I’ll know roughly in my head which days I will post them – lately I’ve been going as far as to schedule them (which feels slightly risky because I’m scheduling unfinished drafts, but it helps me to see what will go on which day). Then during the week, I polish up each one the night before it’s to go live (or sometimes in the morning after it’s published, I’ll read it over and do some quick edits if I didn’t have a chance the night before).

Would it be cool if the full posts were all done by Sunday? Um, yeah! That would leave me time during the week to get ahead on next week’s posts, promote current and past posts on social, read my favorite blogs, actually have a life…but alas, that rarely, if ever, happens (like, I think it happened once). The main thing I try to avoid is having to start a post from scratch the night before it’s to go live. It happens occasionally (like for this post, where I came home from the party and immediately uploaded and edited the photos and wrote the post) – but then it’s going to be a late night and I’m going to be tired the next day – or I just won’t do it at all and then a post didn’t go up. So basically I don’t let that happen, since I’m now committed to posting five days a week.

Thinking One Week Ahead

I like to always be thinking one week ahead – meaning, I feel a little anxious if it’s, say, Wednesday, and I have no ideas for what I’m going to post the following week. So I’m always working on the current week while getting an idea in my head for what the following week will look like. As long as I have some drafts that I know will work for the next week (maybe some pictures sitting on my camera for an NYC Guide post, some book reviews waiting to be written), then I feel good.

So, when do I find the time to work on the blog? Morning before work, on my lunch break, evenings after work (usually with CNN or the Real Housewives of NYC in the background…don’t judge), weekend mornings, weekend evenings. If that sounds like pretty much all of my spare time, well…I guess it is. But I have found that there are way more hours in the day than we account for! Sometimes I’m like, ohhhh, I’m soooo busy…but then I find myself watching four episodes of Friends and I’m like, wow that’s two hours of my life that I could’ve spent accomplishing stuff. See: this article from the Times “The Busy Person’s Lies.” I usually get together with friends and things during the days on weekends, which leaves my weekend evenings pretty free to work on the blog (I’m not a big fan of going out on the weekends drinking or whatnot, so it works for me). Of course if it came to getting dinner with a friend or working on the blog, I’m going to choose the dinner, and just find time somewhere else for work. That’s where not needing to write posts the night before they’re due to post becomes key!

So probably the most important component to posting five times a week when you work full-time is committing yourself to it. For the longest time, pretty much ever since I started blogging, I’d grappled with it in my head. Should I post five times a week? Is it necessary? Do people want five posts a week? Is quality better than quantity? There were times where I posted five times a week because I wanted to and I had something to share. There were times where I said, ya know what? This is just supposed to be fun! I’m going to post whenever I feel like it, even if that’s once a week – I’m not getting paid for this, why should I push myself?

For the past year-ish, I’d been posting every other day during the week (so three times per week), and it felt good and fine. But honestly, there’s always been this little drive inside me that said “post five times a week.” I just want to. I don’t want to torture myself or ruin all of my free time, but I do want to post every day. In a way I see it as a fun creative challenge, and in another way it has just always felt like the one thing, and the very least thing, that I can do to try to grow this blog.

Recently I’ve just naturally come into this major mental shift, where I’m no longer wishy-washy about blogging. I love blogging. I love writing, I love sharing the things I enjoy, I love hearing from my readers, I love photography, and I love the people I’ve met and the friends I’ve made through blogging. I’m feeling a new determination and commitment to putting my all into the blog that I’ve not really felt before. So for me it’s about no longer making a choice – the choice is made. I’m doing everything I can to put my all into this blog, and posting five times a week, again, has just always felt like the right thing to do in that respect. I think there’s a whole other post in here about deciding whether your blog is a hobby or a business…might write about that soon!

Sacrifices, but also not

So yes. Sacrifices. When you commit yourself fully to something and are absolutely determined, sacrifices have to be made. It means getting up early on weekends to shoot photos for posts and write posts. It means late nights after work staying up to finish posts, even though you’re tired. For me it means going home on my lunch break and working on the blog (TBH, that’s not a sacrifice though, I like doing that). It means working on the blog sometimes instead of cooking or cleaning or reading or going to Central Park. But at the same time, I know that living my life is what fuels this blog. Without getting out and seeing friends, taking photos, exploring the city, reading books, and just generally living, I wouldn’t have anything to blog about or any energy and happiness inside of me to blog. So it’s not all sacrifices – it’s just some. And that’s why everyone says you have to love it. You can’t blog to get famous or make money or whatever. You have to genuinely enjoy the hell out of it.

There ya have it! Sorry that was so so long…apparently I have a lot to say on the topic. I’m thinking of putting together a post on how I come up with ideas for blog posts, if that would interest you guys. Hope this provided some insight into the “behind-the-scenes” of blogging, and if you have any questions let me know in the comments!

image via Erika Brechtel with graphics added by me