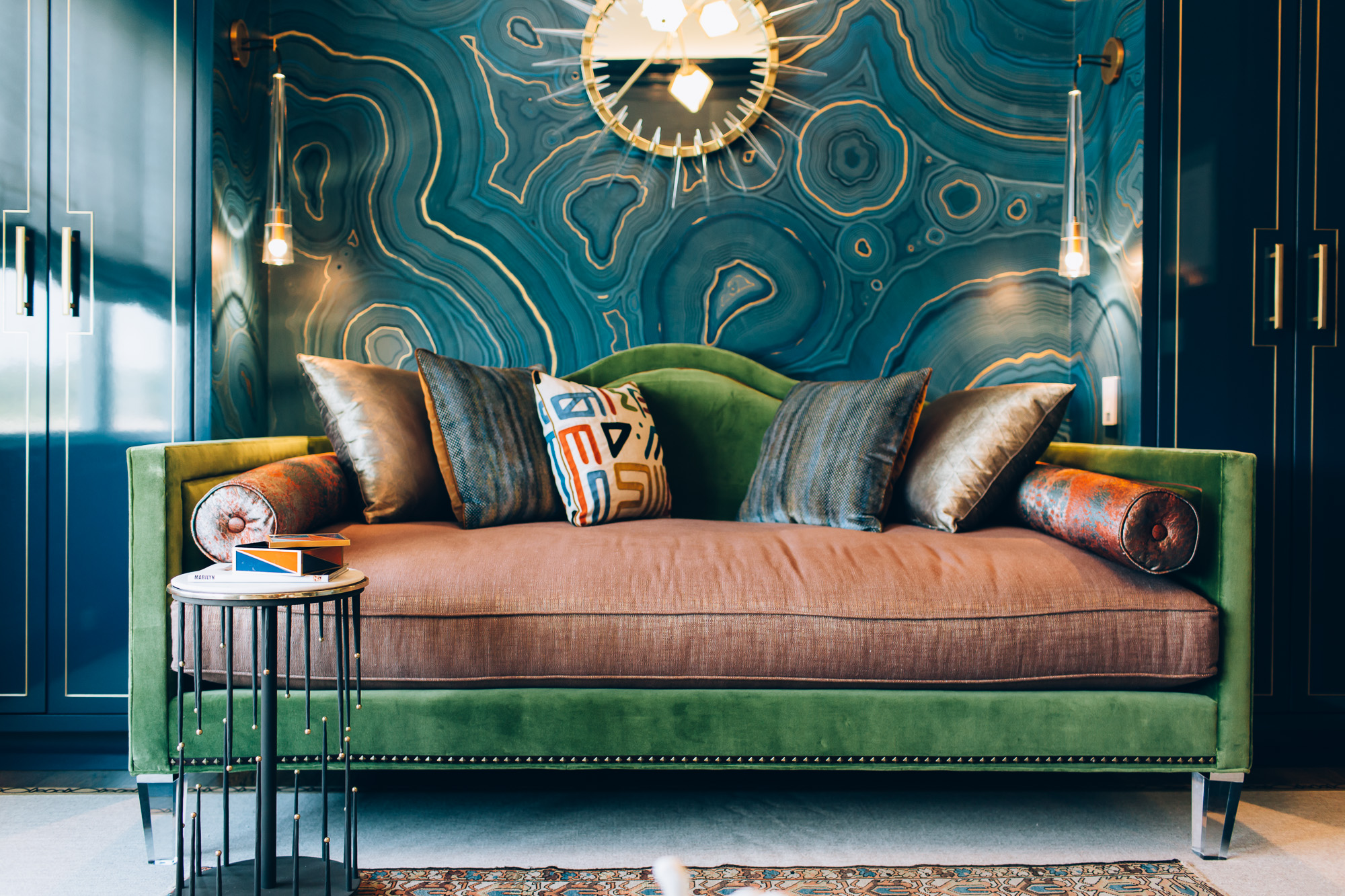 One thing I love about going to showhouses is the opportunity to see such a mix of different design styles all in one place. Some rooms are more preppy, some are more restful, others are a color explosion…and this boudoir created by Rajni Alex Designat the 2017 Hampton Designer Showhouse definitely fell into the category of “glamorous” and “dramatic”!

One of the interesting things I’ve noticed when talking to designers about their showhouse rooms is that they usually create the “client” in their head. They always envision the person they’re designing for – create a character of sorts. More so even than describing the details of the design, they often seem most animated when describing the character who lives in their design. When I met Rajni while touring the Hampton Showhouse, she told me that she created this room for what she called a “modern swan” – a young woman who’s bold, intelligent, stylish, and strong…who has upscale taste, but with an edge. I think that comes across in the design, which Rajni said was inspired by the beach, but infused with a cosmopolitan flair.

This agate accent wall was hand-painted by decorative artist Caroline Lizarraga. How cool is that?! I’m amazed at how often I see walls in a showhouse that I think are wallpaper and which turn out to be hand-crafted by an artist directly onto the wall. I love the edgy mirror and the lucite legs on the custom daybed.

Talking to the designers is the another incredible part about visiting showhouses (and often they are there periodically throughout the duration of the house, not just during the press previews). There are always a million little details that come to life when the designers point them out, and I always appreciate the space ten times more after hearing about all of the thought that went into it and having the details illuminated. For example, in the images above you can see that Rajni carried the little gold line on the custom-built closets through to the agate wall and the sconces hung over the daybed in order to incorporate the metallic accent, but without overdoing it.

The large photograph by Grace Morgan is of street art in Spain, adding another urban element to this Hamptons bedroom. 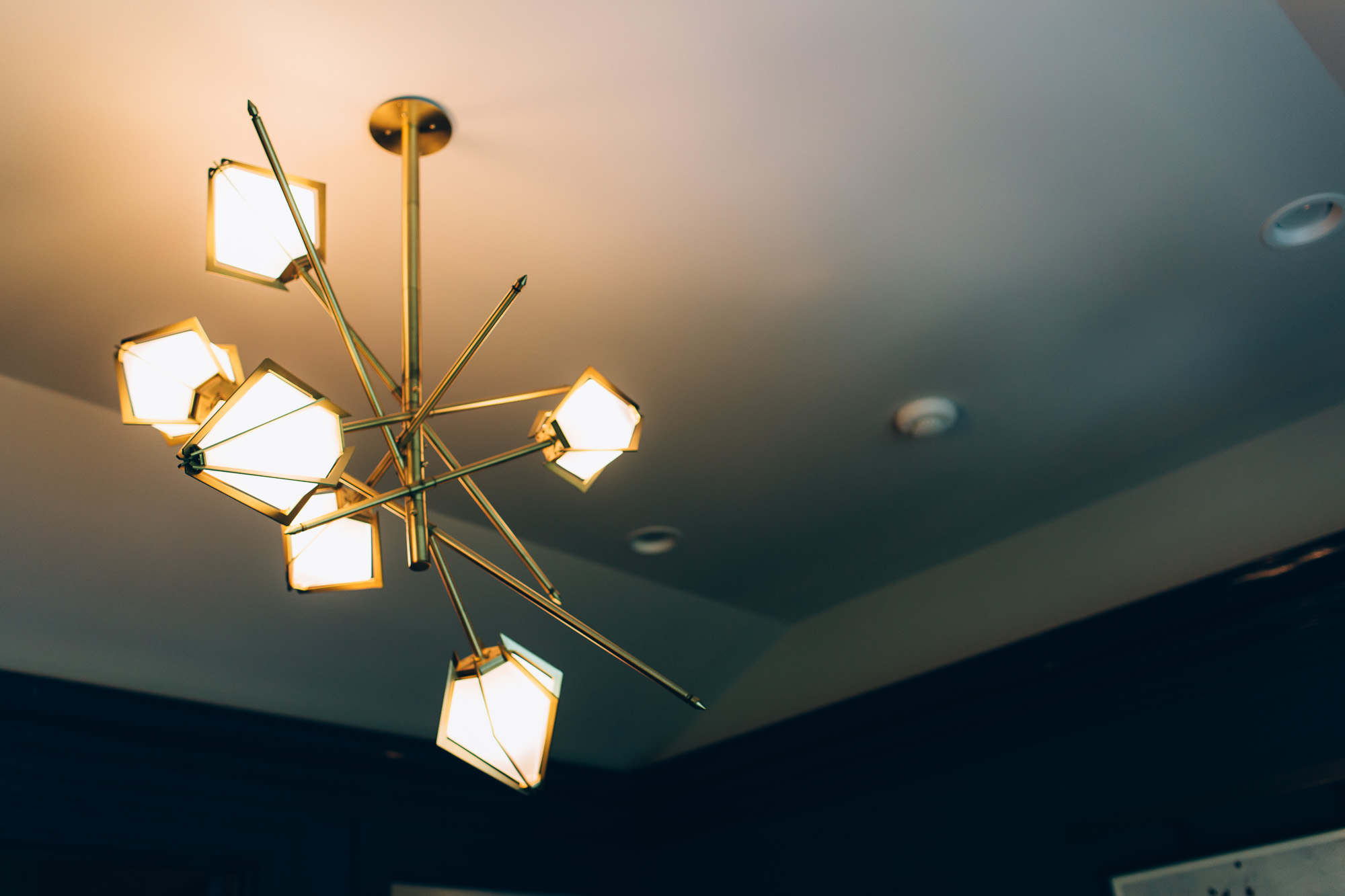 This chandelier by Gabriel Scott is amazing – part of his Harlow series.

Lacquered orange evokes Hermes in the interior of these  built-in cabinets by Arte Wood Cabinetry.

Details from the bathroom – I love the tile and the wall treatment.

As I mentioned above, it’s great being exposed to so many different styles at showhouses. This room isn’t done in a color palette that I typically would gravitate toward, and it’s completely different from my own aesthetic – which is part of the fun! In the interior design course I’m taking they stressed the importance of studying design in real life, by reading design magazines and really studying what makes the rooms work, by going to museums and looking at examples of classic furniture, etc. A showhouse is literally the perfect way to study design, and explore how a designer creates a successful space completely unique to their own aesthetic. Not only is it fun to see, but it’s a great learning experience – and not just for someone who’s pursuing a career in design, but really for anyone who wants to know more about how to decorate their own homes!

The 2017 Hampton Designer Showhouse runs through Labor Day! If you’d like to see more from the house, be sure to check out my previous posts on rooms by Eddie Ross and East End Home Co..