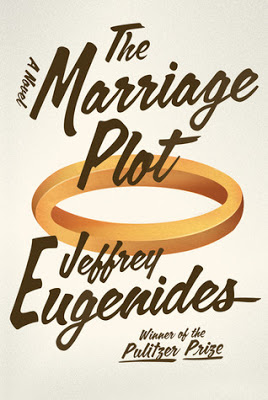 I am so happy that The Marriage Plot is the first book I get to write about for my blog, because I really and truly loved it. Basic plot summary: we follow three college grads in the midst of a love triangle as they navigate graduation day and the year beyond. Madeleine is an English major studying the Victorians, Leonard is a biology major who struggles with mental illness, and Mitchell is a religion major who goes travelling across Europe on a sort-of spiritual journey.

I felt the Marriage Plot hit on a lot of the key criterion that make a book great, to me. The writing was amazing. There were many pages that I actually stuck little Post-Its on just to bookmark certain lines (something I’ve pretty much never done) because the way Eugenides conveyed a thought was so eloquent and original. The characters are richly drawn and so real-not real as in I know anyone remotely like them, but real as in three dimensional, multi-layered, and interesting, with both good and bad qualities. I think Eugenides captured the confusion and uncertainty that can follow college graduation, when you’re thrust out into the chaotic adult world after years of being safely ensconced in the regimented “school” world. These three are trying to create lives for themselves as they embark upon relatively unconventional paths. This is especially true of Mitchell, who is searching for some sort of religious epiphany while also carrying an ever-burning torch for Madeleine.

Madeleine and Leonard carry on a complicated relationship throughout the novel. At certain points I did wonder, why are these two people staying together?, but Eugenides draws you  into an understanding by bringing you inside the character’s minds. “Being with Leonard made Madeleine feel exceptional. It was as if, before she’d met him, her blood had circulated grayly around her body, and now it was all oxygenated and red.” And Leonard: “If Madeleine left, he would be alone again, as he’d been growing up in a house with his family, and as he’d been in his room at the psych ward.”

Eugenides even had me laughing a few times, injecting a lot of humor into his writing-“..Mitchell had been recovering his emotional equilibrium. That was to say, he now thought about Madeleine two or three times a day rather than ten or fifteen.” And Leonard: “It was time now, to the extent possible, to show some backbone and power up. This he achieved by collapsing slowly sideways until he was curled fetally across the sofa.”

The novel is mostly told from the perspectives of Madeleine and Mitchell, but I thought the most compelling section was the briefer glimpse into Leonard’s mind. To me he was the most interesting character, partly because I went from loving him to hating him and back and forth again within the space of ten pages, several times throughout the novel. You can’t help but have a strong reaction to him, and the way Eugenides captured his struggles and his inner world was to me, extraordinary. Eugenides found a way of making him so sympathetic to the point that you could almost cry for him, and then so repulsive all of the sudden-and yet, it was NEVER not believable. I’ve never encountered a character like this, or like any of the characters, in another novel. Even Madeleine’s family members, who only make a few appearances, were fully and richly brought to life.

Overall, I found this book hard to put down and I looked forward to reading it each day, which to me means it’s good! I felt invested in these characters and in their stories. Highly recommend.