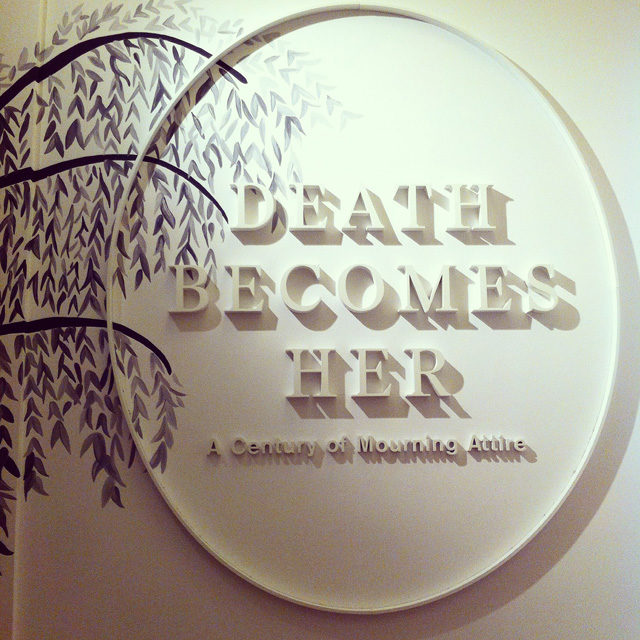 Over the weekend, my friend and I popped into the Metropolitan Museum of Art to check out Death Becomes Her: A Century of Mourning Attire, the fall exhibition mounted by the Met’s Costume Institute (which, unbeknownst to me, was renamed the Anna Wintour Costume Center in May). The exhibition explored the societal and cultural standards set for mourning attire throughout the 19th and early 20th centuries in both Europe and America. It was really interesting to see the extremely formal dresses, capes, and accessories worn during times of grief, while also learning about the the societal standards to which women were expected to adhere sartorially during their time of mourning. Read on for more pictures and a little more of what I learned at the exhibit: 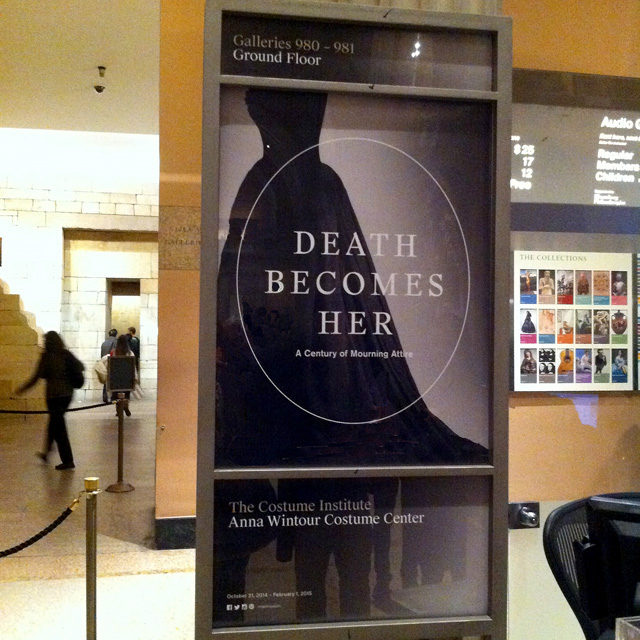 During the time periods explored (late 1800s and early 1900s), mortality rates were up due to war and high rates of death in childbirth and infancy. The average life expectancy being less than 50 made mourning a familiar part of life for many. Prescribed social norms dictated what women were supposed to wear during the period of mourning, which would reflect their taste, their status, and their level of refinement, but ultimately it was up to the individual to interpret and translate these dictates for herself. For some women, mourning attire became a central part of their identity and a way to express and work through their grief, while for others, it was simply an inconvenient and expensive duty performed out of social obligation. Queen Victoria would be an example of the former – after losing her husband, she continued to wear mourning garb for the remainder of her 40 years of life. 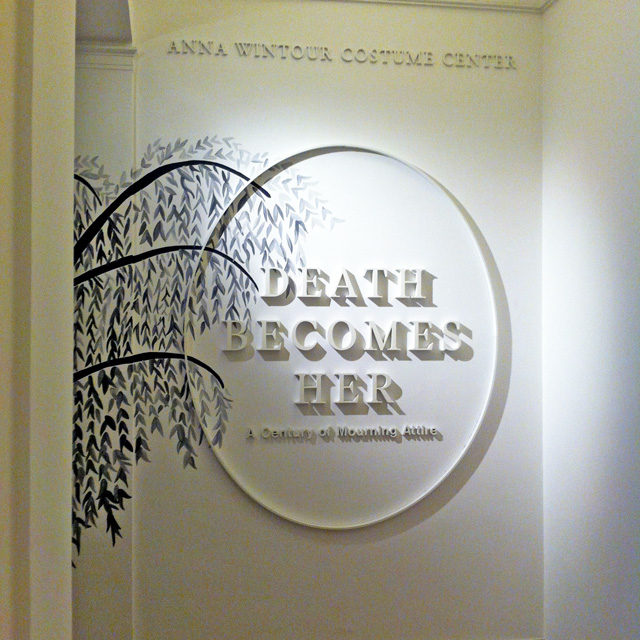 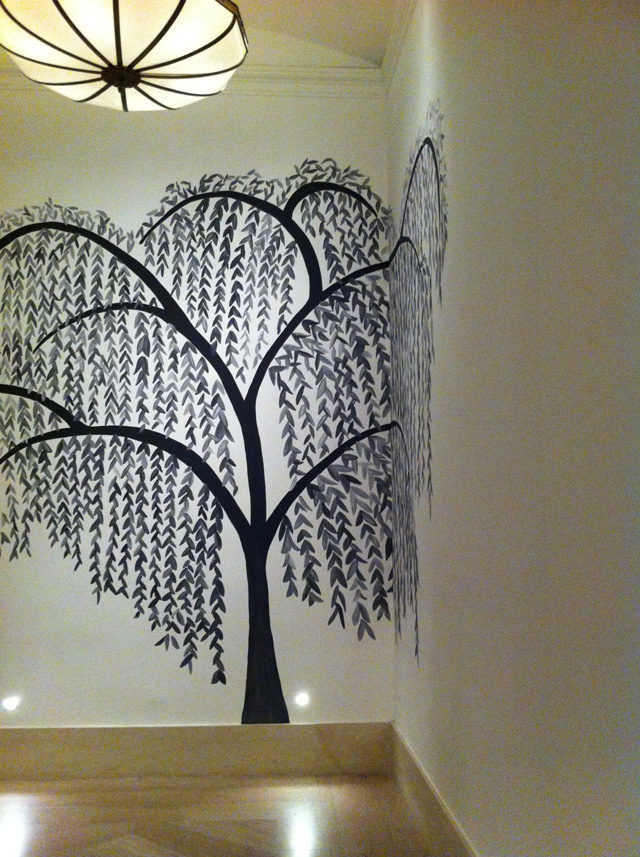 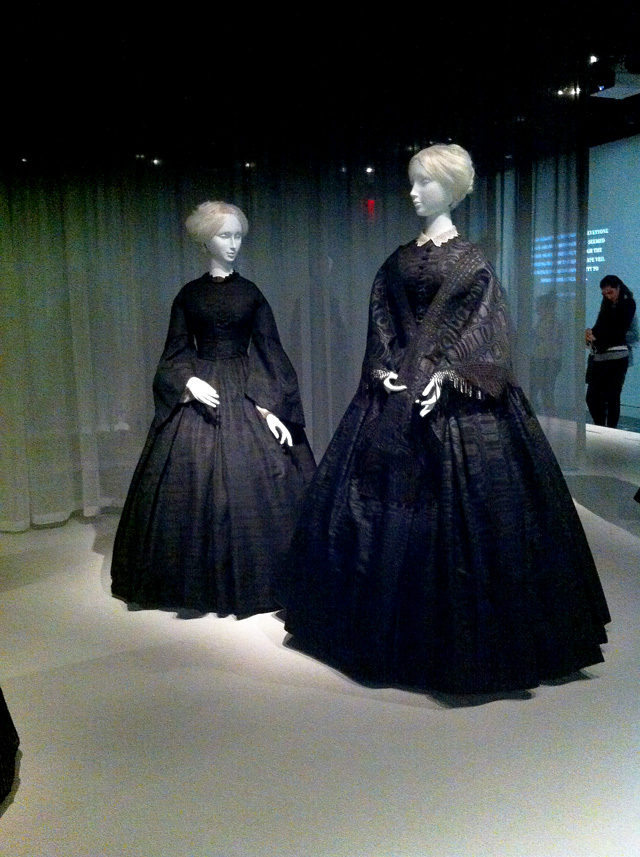 Different types and shades of fabric were deemed appropriate for the different stages of the period of mourning – a period which was sometimes expected to last for two or more years. In the first stages of mourning dull shades of black were expected. As time passed, more sumptuous fabrics of the same shade could be worn, which then transitioned to garments in deep shades of mauve or gray. This progression was meant to mirror the journey through mourning back to normal life. 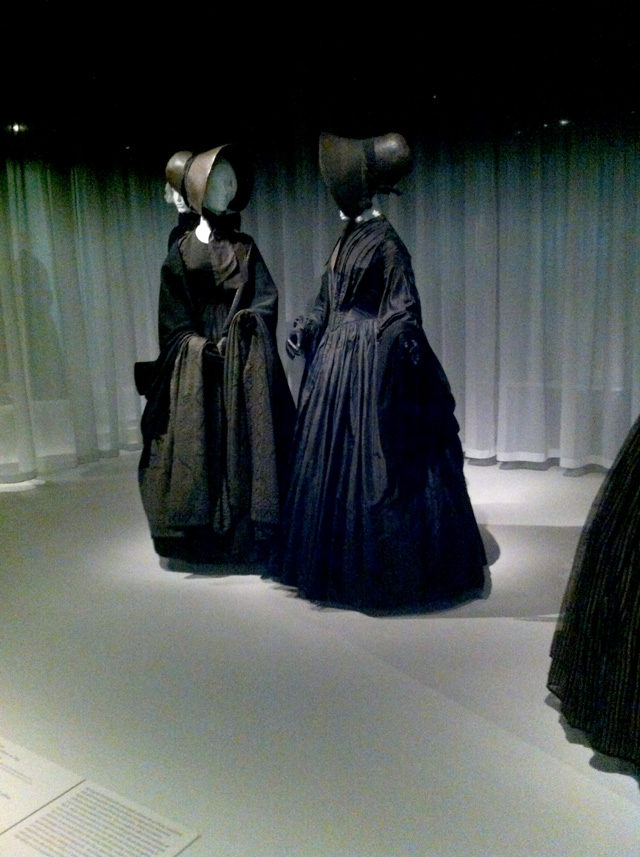 Black mourning crape, a crinkled silk gauze with a matte finish, was a material used exclusively for bereavement garments in both America and Europe. It was sold for high prices, as it had aristocratic connotations. The process of producing it involved a heated metal roller which impressed a design on the textile until it gained a crinkled effect. The fabric was dyed black, then starched to look dull. Later cheaper alternatives were introduced, one of which was known as crepe cloth. Crepe cloth came with a pre-woven pattern to imitate the crimped surface of mourning crape. While the materials used for mourning garments were purposely dull, the silhouettes and design details of the garments often cleaved to the popular fashion conventions of the day. 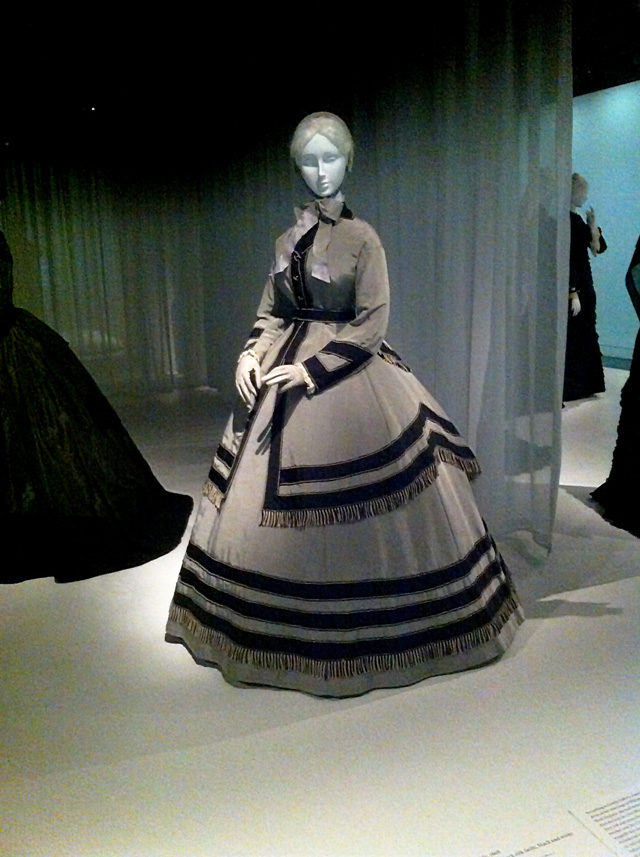 This dress was very interesting in that, surprisingly, it was a wedding dress. The bride, Amelia Jane Carley, had it created in these half-mourning shades of gray and black as a way to honor those who died in the Civil War, even though she and her groom personally did not lose any family members. Rather than serving as an individual expression of grief, this wedding dress/mourning attire was chosen to reflect the period of mourning that many other families were experiencing at the time of her wedding (1868). 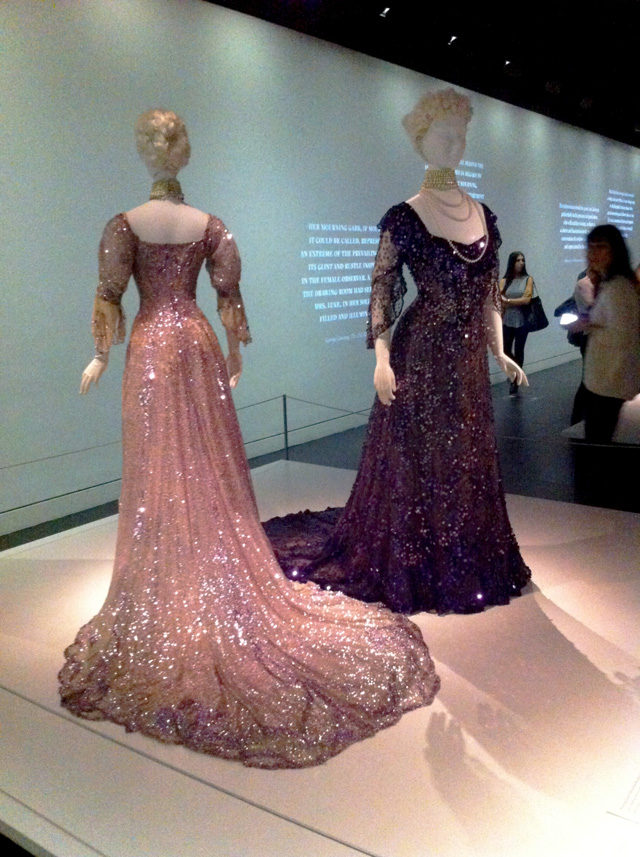 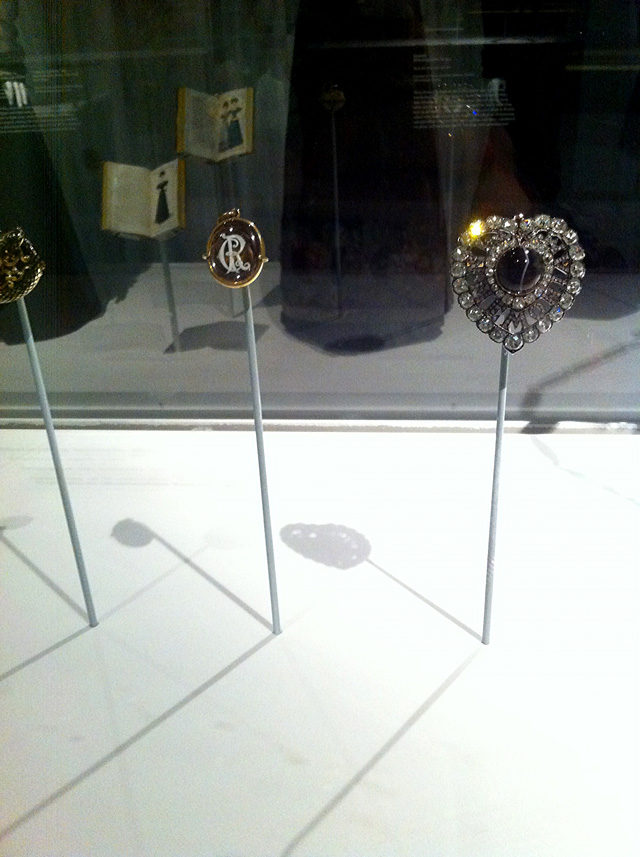 In the middle there is a mourning locket, engraved with “In memory of 17 May 1859” on the back. It’s made of gold and glass, and guess what’s inside….Hair! From the deceased I assume. Gross but interesting. 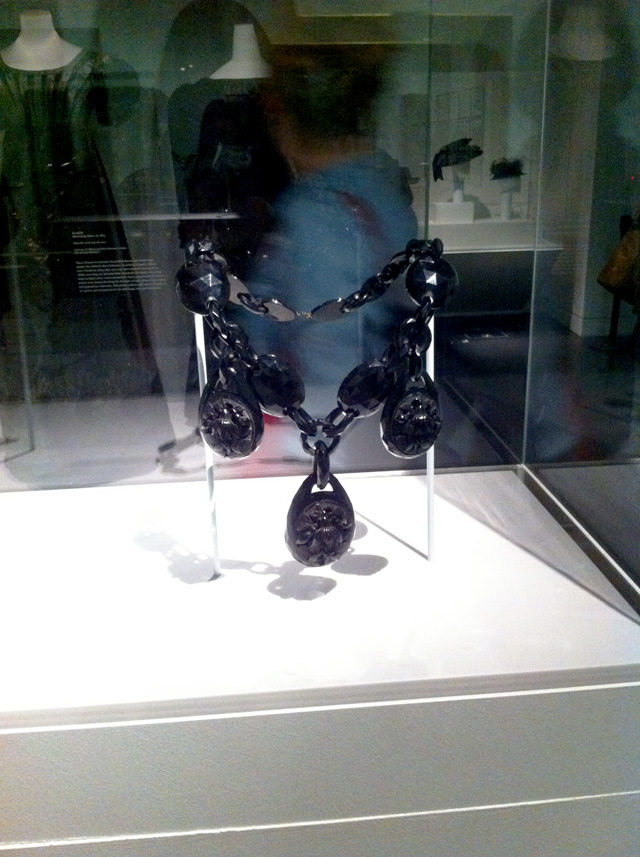 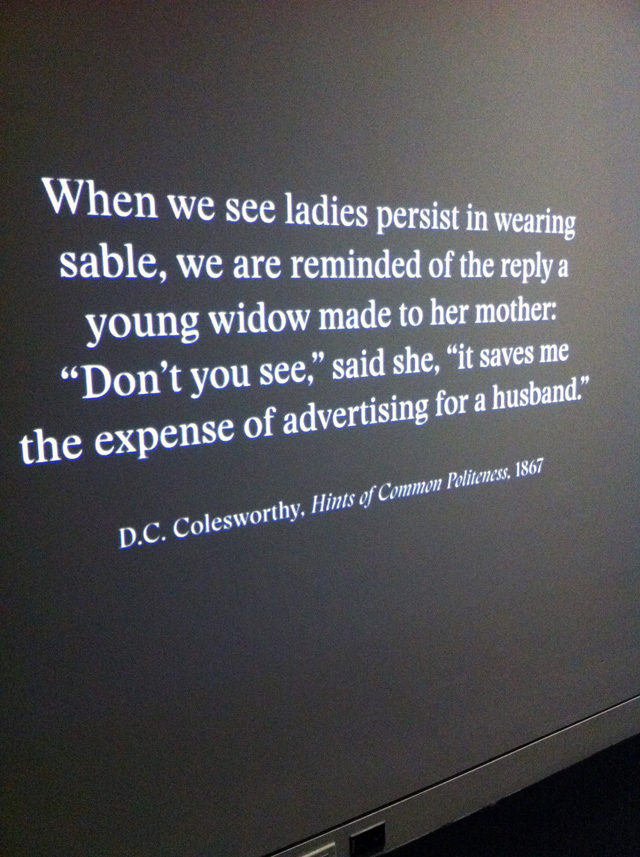 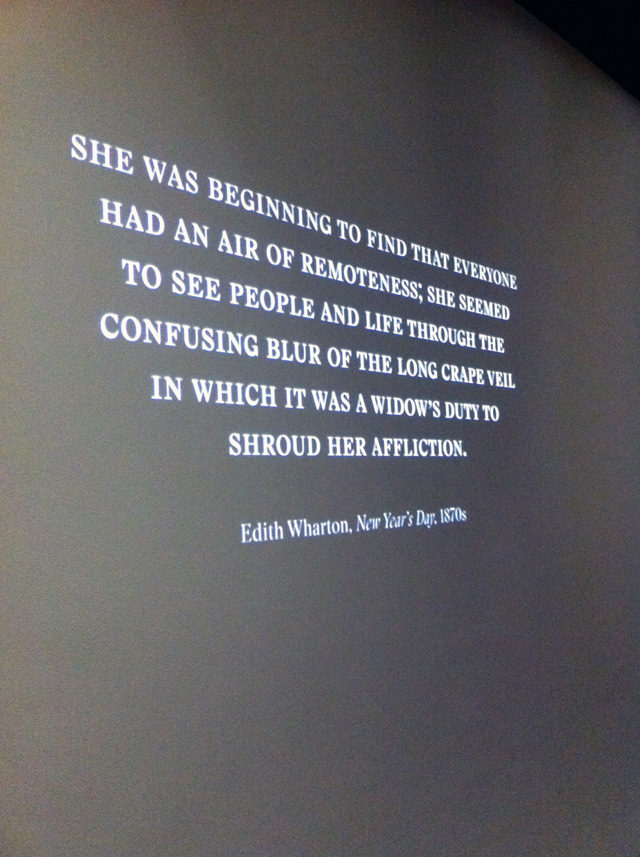 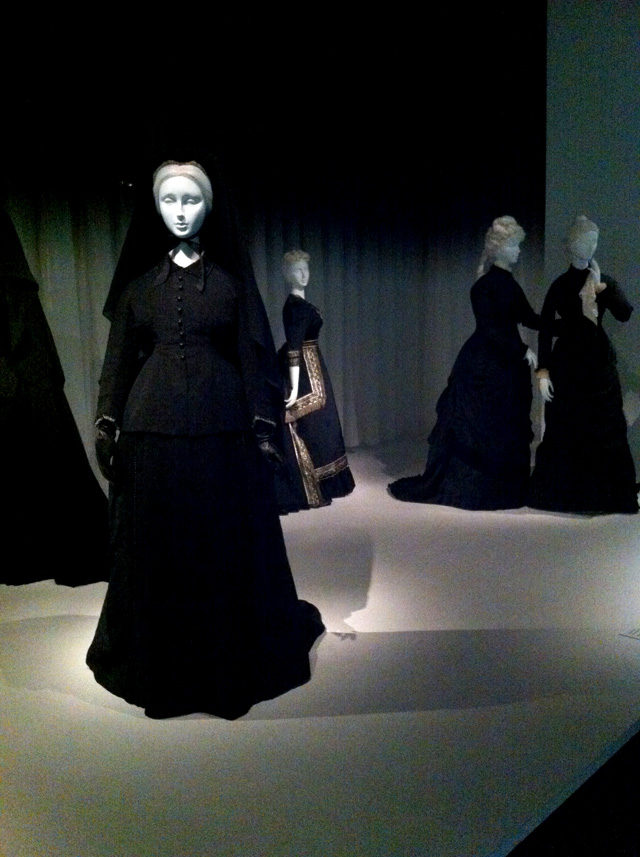 This exhibition was a really cool way to learn a bit about fashion history, which is a fascinating subject, but also to learn about cultural expectations placed upon women through the lens of fashion. I recommend getting over there ASAP if you want to check it out, as it finishes it’s run on February 1st.