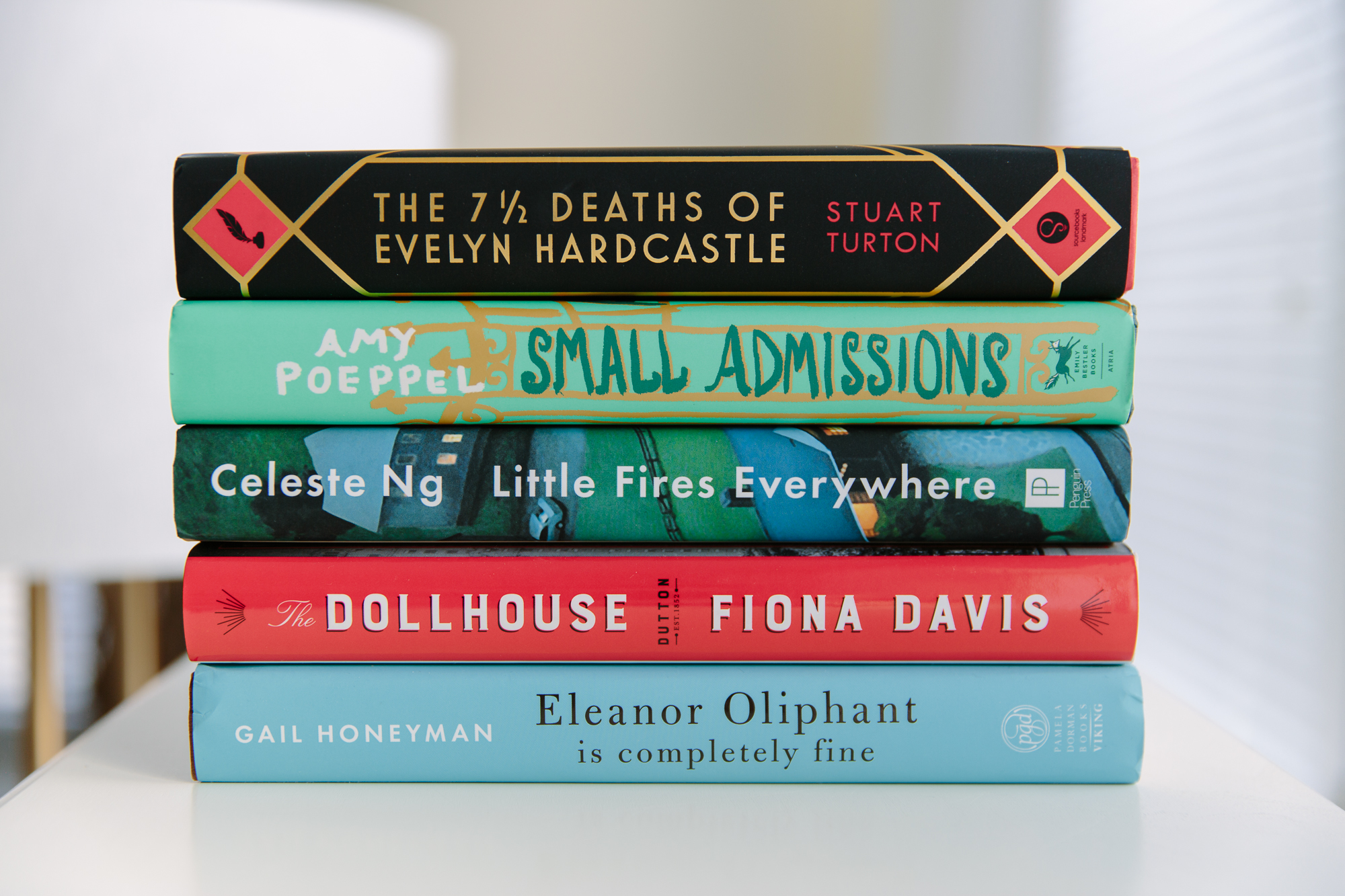 It’s been forever since I wrote book reviews so I have a lot – the ones pictured above plus more! So if you’re looking for a new read, look no further:

The 7 1/2 Deaths of Evelyn Hardcastle, by Stuart Turton: This was definitely the most unique of all the books I’ve read recently, if not the most unique I’ve ever read! I feel like it’s hard to explain but as the publisher puts it, it’s kind of like Agatha Christie meets Quantam Leap – a manor house murder mystery with a sort of sci-fi aspect that structures the story. For me, for most of the book, it was that Agatha Christie aspect that was most in the forefront and that made me absolutely love the book. Actually, this is completely random and I’d be shocked and delighted if anyone knew what I was talking about, but it reminded me of a computer game I used to play when I was a kid called Laura Bow: The Colonel’s Bequest. I could go off on a real digression about how much I loved that game (which was/is so antiquated you had to type in commands), but I won’t bore you with that…suffice it to say it’s kind of like the game Clue, which is also similar to this book in a way. Anyway I totally recommend it – very gripping and I’ve never read anything like it. I don’t want to give anything away which is why I’m being a little vague but I’ll say too that if you’re a fan of Black Mirror I think you’ll like this!

The Dollhouse, by Fiona Davis: I liked this! It focuses on two women in New York City, one present day and one in the 50’s, both living in the Barbizon Hotel, and it weaves their two stories together. I pretty much love anything to do with New York City history so though I did find this a little light and fluffy, I still enjoyed it. I think I’m going to like her other books as well, as they follow the same blueprint of two NYC stories, one contemporary and one historical.

The Shark Club, by Ann Kidd Taylor: This book was so charming. Actually I feel bad for recommending it now because it’s a perfect summer read – it takes place at a beachside hotel in Florida and while it’s light, there’s still substance to it. Our main character Maeave, a marine biologist, moves back for the summer to the beach hotel where she was raised by her grandmother. While there she comes across her ex-fiance (now a widower), and his lovely young daughter…but at the same time she’s still embroiled in a budding romance with a fellow marine biologist, and also investigating a shark-finning crime that starts to become more complicated as she investigates further. I found the book to be well-written and I’d definitely recommend it.

Ready Player One, by Ernest Cline: Loved it! The movie was very meh but I loved the book…it was compelling, fun, really imaginative, and just engrossing. It takes place in a futuristic world where the Internet has become a thing you can enter like virtual reality. When the creator of this Internet (called The Oasis) dies, he leaves a challenge behind in which the winner will get the ultimate prize – total control of The Oasis. We follow teenager Wade Watts as he navigates the challenges and meets tons of crazy characters and bad actors along the way. Just so, so good. I don’t even really like young adult books or virtual reality stuff but I loved this.

The Woman in the Window, by A.J. Finn: This is a classic psychological thriller, in the vein of Rear Window. A reclusive woman thinks she witnesses a murder while peering into her neighbor’s windows…but you soon start to wonder – did she? The narrator is questionably reliable and you’re not sure who to believe as you move through the book. There are a lot of books out there like this nowadays (and I’ve read a lot of them!), but I particularly enjoyed this one. It felt atmospheric and had a Hitchcock-ian vibe to me, and there were some shocking surprises – definitely a page turner!

The Outsider, by Stephen King: Really liked this one and raced through it. Total page turner. A beloved boys baseball coach in a small town is arrested for a heinous murder, based on seemingly irrefutable DNA evidence – but when more irrefutable evidence shows up that places him in a different state at the time of the crime…well, things start to get weird. It’s Stephen King after all!

Little Fires Everywhere, by Celeste Ng: Also enjoyed this immensely! You’ve probably read and/or heard of it by now as it’s been optioned by Reese Witherspoon and I think is being made into a limited TV series? It takes place in a small suburban town where the Richardson family lives a seemingly idyllic life. A mother and daughter enter their lives and thing start to change as the two become embroiled in things with the Richardsons, while at the same time a custody battle ensues when an old friend of the Richardsons’ tries to adopt a Chinese-American baby. All of the elements are weaved together to create a really compelling story.

Eleanor Oliphant is Completely Fine, by Gail Honeyman: Loved this book! I had no idea what to expect and found myself first startled, and then completely charmed by the main character. And then you learn more about her as the book goes on and it becomes kind of heartbreaking. It’s mainly about this character who is very closed off and socially awkward (and inadvertently hilarious), and what happens when a chance encounter causes her to start to open up to a new friend. It was really wonderfully written and this is such a unique character, unlike any I’ve come across before – she sticks with you. I can’t recommend this book highly enough.

Social Creature, by Tara Isabella Burton: Really liked this one – it’s basically an updated version of The Talented Mr. Ripley, for modern day – a young woman befriends an exciting girl lives a seemingly charmed life in NYC, and their friendship takes a turn for the sinister as events one night spin out of control. At first I found the “exciting” character kind of grating but I think part of that was the way the narrator read her (I listened to it on audiobook). Once that faded and I got into the story I started to really enjoy it. It takes place in NYC so I also liked that aspect of course…another definite page turner.

The Talented Mr. Ripley, by Patricia Highsmith: Once I read Social Creature I realized I should read the inspiration! This is the classic psychological thriller. Also a really good movie – the movie was so beautifully filmed and acted I think I liked it just as much as the book!

You, by Caroline Kepnes: I LOVED THIS BOOK. This is my absolute favorite of the whole bunch – can’t say enough good things about it. This is a book I would love anyway because it’s a thriller and suspenseful and all that, but what takes it to a totally different level is the main character. First of all, you can tell from the first page he’s evil and awful, but scarily enough, you start to like the guy. He’s funny, and sardonic, and totally twisted but somehow you find yourself pretty much rooting for him as he creepily stalks a girl that he becomes interested in. That sounds crazy to say, but see for yourself! Seriously though just a really good book elevated by an amazingly unique character who’s just fun to read.

Hidden Bodies, by Caroline Kepnes: The follow-up to You, which picks up pretty much right where the first one left off – I liked it but just not quite as much as the original. I still enjoyed the main character just as much and found him as enjoyable and hilarious and twisted as in the first, but I found one of the ancillary characters (the love interest) to be a little weak. Overall though I still really liked it and it was still funny and really enjoyable.

Small Admissions, by Amy Poeppel: A quick, light read about a girl who becomes an admissions officer at a small Upper East Side private school. I liked the NYC aspect again and it was just a fun, fast read – a little fluffy but fun.

How It Happened, by Michael Koryta: FBI investigator Rob Barrett is an expert at extracting confessions, and he’s in the midst of exactly that when the book opens. A couple was killed in a hit-and-run and Rob is getting what seems like a cut-and-dry confession from Kimberly, a girl who was involved…but when investigators go to recover the bodies, they’re not where she said they’d be. She and her story are quickly discredited, but Rob isn’t ready to give up on Kimberly’s version of events, and neither is the father of one of the victims. This was another quick read that was suspenseful and kept me guessing. I wouldn’t call it a psychological thriller, but more a crime thriller. I also really liked another book by the same author called Those Who Wish Me Dead.

Two books I’ve read recently that I didn’t love: Saints for All Occasions (just meh for me) and The Wife Between Us (did not enjoy).

What have you been reading recently? I just started this and am loving it so far!