Skip to content
As I mentioned in a previous post, I really enjoyed Deborah Needleman’s The Perfectly Imperfect Home. A section I found especially interesting suggested adding a touch of quirk to your space, in the form of  irreverent accents, some small animals, an odd chair, things where they shouldn’t be (like a frame leaning against a wall, instead of hung up), and more. Her definition of quirk is really wide-it shows that even things you might not personally classify as “quirky” can fit the bill and accomplish what these accents are meant to accomplish-just imparting a sense of ease and spirit into a space. Any unexpected or off-kilter accent shows that you have a sense of humor and don’t take decorating too seriously. It catches the eye and keeps things from being too stiff, over-decorated, or uptight. Here are a few touches of quirk I’ve come across and loved: 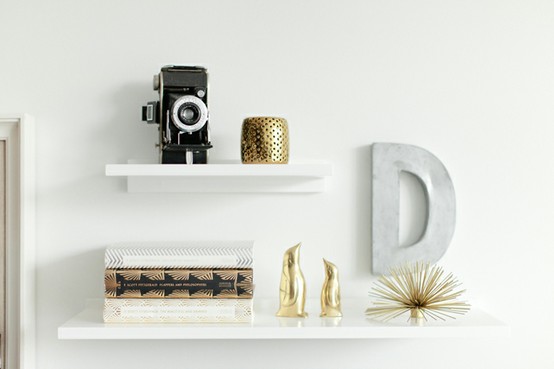 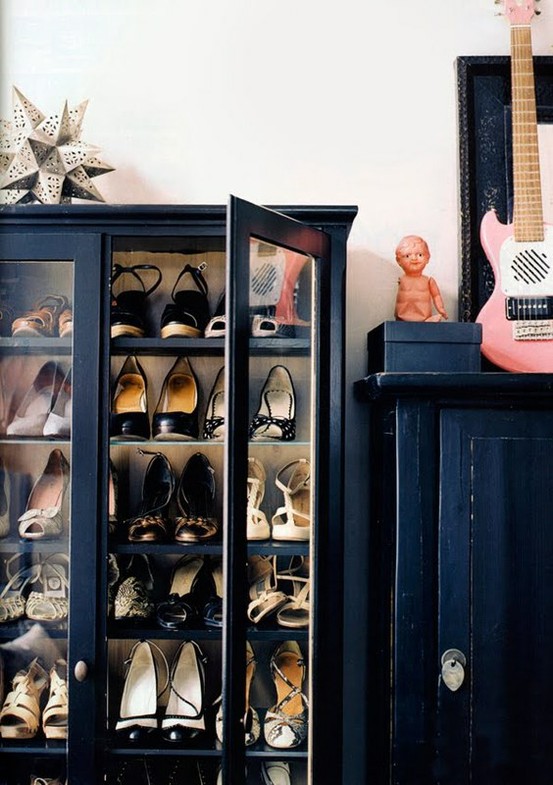 via?
With the fabulous shoe closet as the focal point, you almost don’t realize there’s a weird little armless baby doll on the other cabinet! Not exactly the quirky piece I would choose, but you can’t deny it adds a little interesting, off-kilter touch. 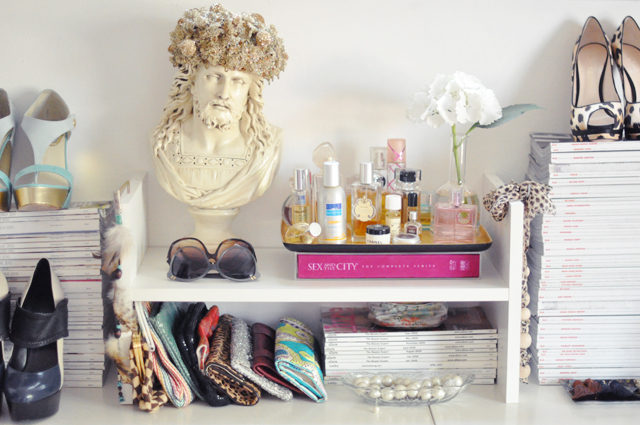 via lovemaegan.com
I love this touch of quirk-obviously, since I’m obsessed with busts. And the wreath just adds an extra little *wink* to this one. 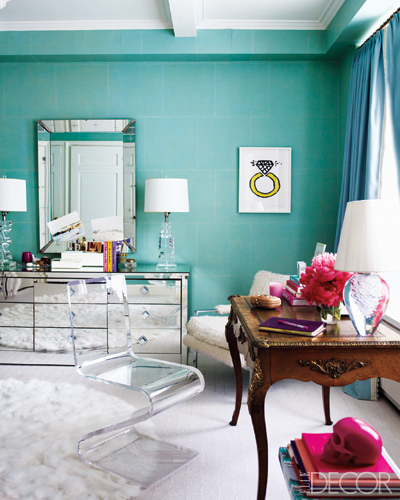 This space is full of quirk, in the form of the hot pink skull, the interesting chair, and the piece of artwork on the wall-but it still retains an overall look of sophistication. (PS-I WANT THAT CHAIR). 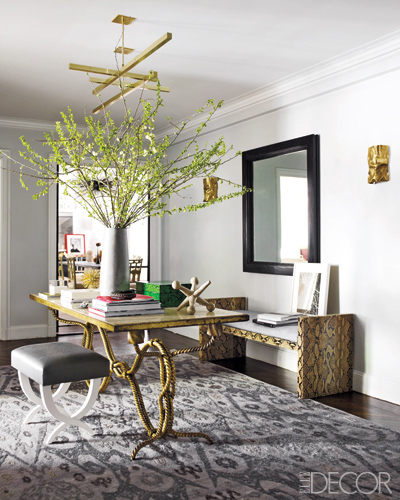 Another room from Ashley Stark’s Manhattan apartment via Elle Decor-the oversized scale of the plant is “something unexpected-“adding just the perfect surprise to this very upscale looking space. 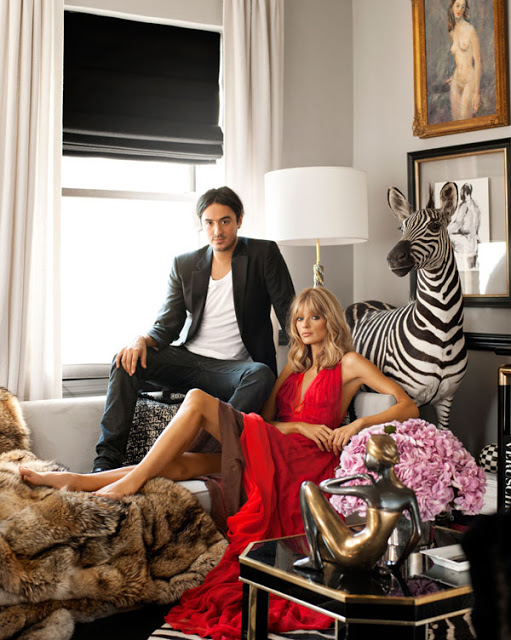 via
How’s that for quirk? A giant zebra! Not too realistic for most of us, but definitely fits the bill. 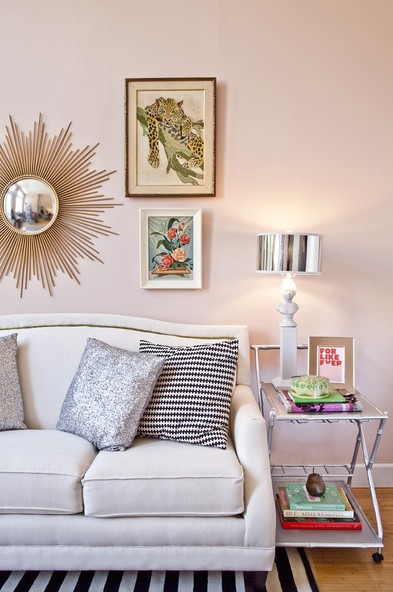 via
Look closely at the lamp-you don’t notice at first glance, but on closer inspection, you catch a little quirky surprise. 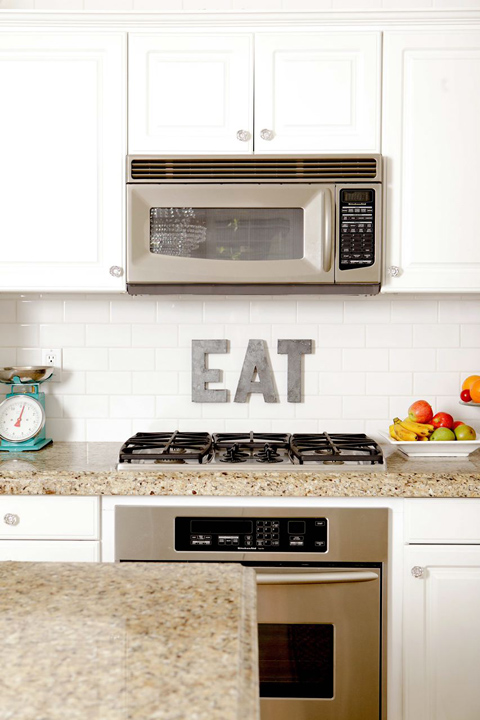 Nicole’s home via Made By Girl
These letters are perfect, just perfect. Keeps the vibe light and relaxed, which is what you want for a kitchen.

Piles of mags being used as a table would fit Deborah Needleman’s defintion of quirk perfectly-something being used as it normally wouldn’t be. Plus it’s just interesting and relaxed-the opposite of uptight. And see how that attitude of relaxation is a great contrast to the sort of fancy looking wall/curtain fabric and china? Without the piles of magazines, those elements would look rather stiff, maybe English Grandma-ish, but with the piles of magazines it just keeps the vibe more laidback.
Here are two little touches of quirk I found in my own space: 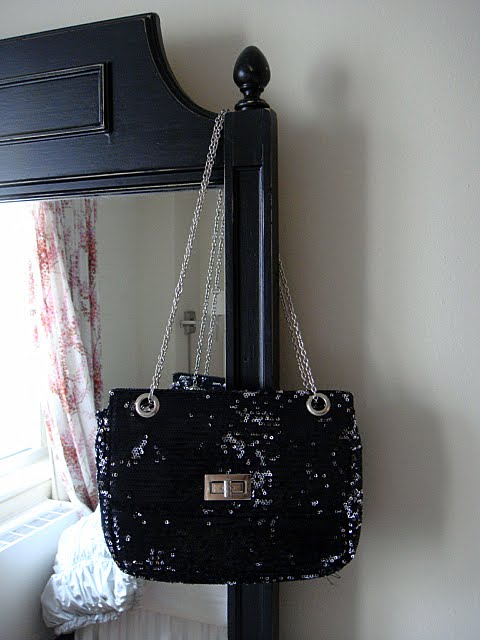 Something where it “shouldn’t” be-a glittery purse slung over a mirror. 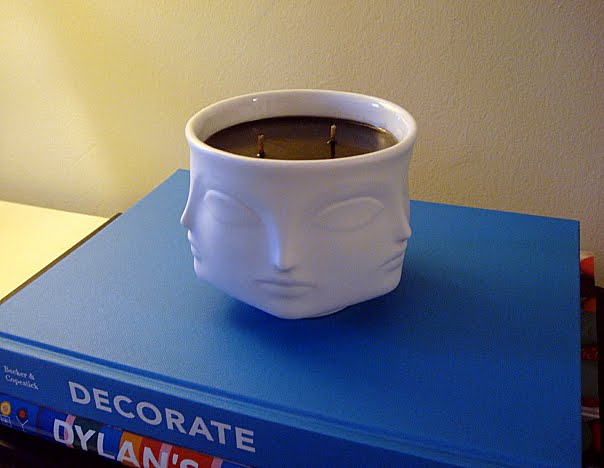 My Jonathan Adler candle. Pretty sure you can’t beat JA for a touch of whimsy! He’s like, the King of Quirk.
I think what makes quirk work, especially in the spaces above, is that everything else is kept very classic and sophisticated aside from just the ONE little quirky touch. As Needleman points out, it’s not about being wacky, it’s just about creating a sense of easiness and spirit in a room. I think these touches really bring a space to life.
The cool thing about Needleman’s book, and this section especially, was that after reading it I went through my Pinterest boards and found that most of the spaces I had pinned and really, really liked did have a bit of quirk to them. I just never realized that the quirky touch was what made them attractive to me, until Needleman so astutely pointed it out!
What do you guys think? Any quirk you can identify in your own spaces?