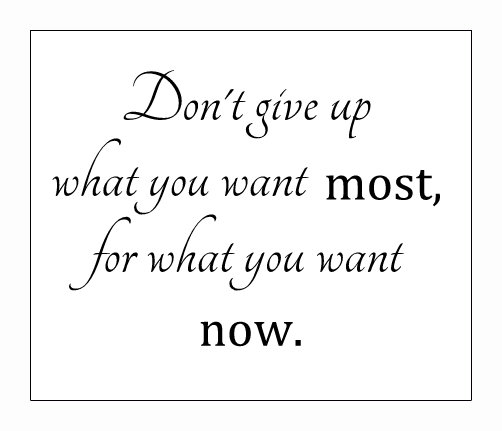 I’m not big into New Year’s resolutions because I feel like it’s just too much pressure and most people don’t stick to them (and I know I wouldn’t). However, I have had one big goal on my mind a lot lately, and that’s saving.

I’m really, really good at spending money. Clothes, books, items for the home, macarons at Laduree…yup, I like to buy all that. Often. But the time has come for me to really make a concentrated effort at changing my ways, because I’ve come to the realization that I need to own an apartment at some point in my life. Renting is basically throwing your money down the toilet, whereas owning is an investment.

It feels like an unreachable goal because I happen to have wound up living in one of the most expensive cities in the world, especially when it comes to real estate, but there’s not much I can do about that. I love NYC and it’s close to my family, so that’s where I live. And if I ever plan on owning an apartment here, I need to get serious about A. saving, and B. working more. If I do both of those things, there’s a chance that I could one day have enough money for a down payment.

I have other goals too, and things that I would like to buy that cost a lot. There’s travel – I’ve never been to Europe and I would love to go, but I don’t have the funds (well I do, but I’d have to wipe out my bank account, which doesn’t seem wise). I’d also like to buy a new computer at some point, and Photoshop to edit my pictures-all pricey. Hence, the need to save – both for long term goals (apartment), and short term goals (travel, etc).

Anyway, there’s just come a point where I have to stop buying so much stuff that I DON’T NEED, and every cute thing that catches my eye, and start really considering where my money goes (or so my Mom tells me, anyway). Being in a good place financially, and especially owning an apartment or home, says to the world (and myself): I am a stable, together person. Younger people might not understand this, but I’m going to be 30 in two years, so these are the things that have started to be on my mind.
Now believe me, I have no intention of passing up fun things like brunches or dinners or really special experiences to save money-that’s part of the fun of living in New York. What I plan/hope to do is stop buying clothing that I don’t need (because I wear scrubs five days out of the week), books that I don’t need (because I have about twenty piled up in my apartment that I’ve bought and haven’t read yet), home decor items that I don’t need (because I live in a tiny apartment and it’s pretty much full already)…and as for those macarons at Laduree…well, I’ll try to cut back :).
I actually do have some strategies for saving…not that any of them have actually worked for me yet, but I’m planning to take a renewed interest in implementing them as part of my effort.

Buying only ONE un-necessary, just-for-fun thing per month is something I tried last year and only stuck to for a short time before losing interest. If you only buy one thing per month, it makes you really consider your purchases. I’d have to choose the thing I LOVE, out of the millions of things that I see and want – and when you don’t buy things often, it makes each purchase more special and fun anyway. I’ve also found that when I see something I like and resist buying it, I usually wind up forgetting about it anyway…and by the time I see it again I’ve usually lost interest. Waiting. Instead of buying things immediately when I see them and like them, I will wait to give myself some time to think it over. Last year when I was making an effort to save, I created a wishlist board on Pinterest where I can pin everything that I want to buy. That way I can buy it later if it’s something that I keep thinking about it and really want. The thing was, when I was doing this last year, I’d look over the board every once in a while and realize I’d lost interest in most the of stuff on it-I still liked it all, but I no longer felt like omg I must buy that! So that’s a helpful strategy.

I’m certainly not about to stop posting about items that I love on this blog-in fact, I sometimes feel like that helps me because once I post something, at least I’ve shared it and written about it-then sometimes I feel okay with not actually buying it. Also, I hesitated to post this as 1. I don’t usually write about personal things, and 2. I might totally fail at this/lose interest in it…but it’s on my mind, so I wanted to share it. Also, I saw a quote this morning about how writing down your goals increases your chances of achieving them, but telling a friend about your goal doubles that chance. This reaffirmed my determination to share this – I think by sharing your goals you feel more accountable to them.
Any of you out there NOT big shoppers? I know there are people who just don’t shop (mostly men, I’m guessing) and I’d love to hear how that’s possible. Any saving strategies? I’m all ears!
text image created by me-not sure who to attribute that quote to. all other pics via Pinterest